When The Lights Went Out In Atlanta~ Morningstar's RT Recap 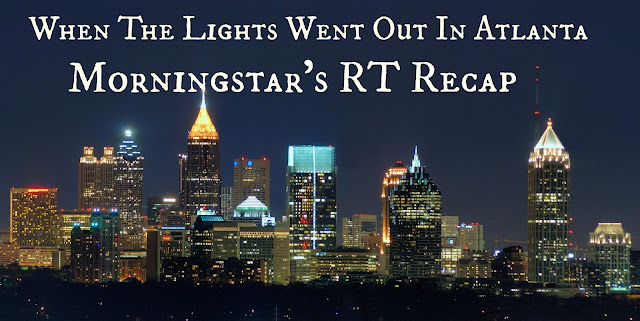 After going to and rocking out at GRL, I got this smart idea that I could do RT (Romantic Times Convention) and be completely not overwhelmed. And in part, that was true. RT Con is huge, like thousands of people, HUGE. With panels and events and bars and food and so much. It also had my people. My book people, my friend people, the people who make me laugh and fill up a small part of my heart with happy for just being there in my life. Most of us have those people in our day to day lives or our social media lives. These people are mine.

From Riley, my roommate and friend, who had to run through the airport like they do in movies just to make her flight. This trip showed us that hotels should have two bathrooms (or maybe just more freaking outlets) in a room because two girls having to shower and fixing our hair and makeup every day with just ONE bathroom is time-consuming, to say the least. Not ONCE did we leave our room before 10 am, no matter that poor Devon (actually it was his choice so don’t feel bad for him) showed up at 8 am every morning. She also showed me, yet again, why she is my hero with how she takes life by the balls, no matter how hard it gets, and keeps going. Riley is stronger than she thinks and when I grow up, I want to be her. 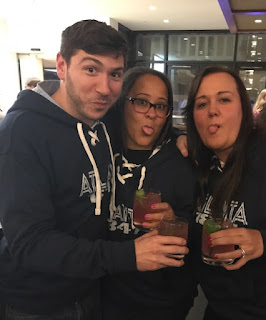 To Devon, the guy who loves to give out tough love, who showed me on day ONE that you can get just as embarrassed standing next to the guy (*cough* Devon *cough*) who turned out the lights in a room full of people during a panel when one of the most popular romance writers in the M/F genre is talking, as the guy who actually did it. Also, that he has a super brain wrapped in a quirky, dirty, snarky package who truly wants to see his colleagues and this genre succeed. That man, my friend, has the BIGGEST heart and don’t let him make you think otherwise. Oh, and I want to thank Devon and BF for being awesome and for a night I know I will never forget! 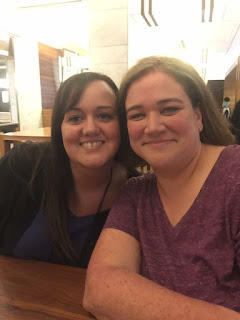 From Annabella, who can’t get rid of me even if she tried, who showed me what writers mean when they say that someone’s face is beet red just from opening her bag of dicks on an FB live video. (If you haven’t seen it you should join her group Annabella’s Sexy Souls to watch! hehehe). Annabella also showed me that she has just as good of a heart in person as she does on social media and that as talented and loved of a writer as Annabella is, she is still humble and so down to earth there’s no way not to love her just for being her. Oh, and drunk she smiles a LOT! :)

To Jenn, my new friend, who showed me that someone who speaks as low as a mouse and looks innocent is a much dirtier girl than I can ever hope to be. Jenn IS that saying “It’s always the quiet ones.” Man, can she hold her own in any conversation and lastly, if she finds or is given $10 she makes great use of it. *wink*

From Hope, a fellow Rebel and friend, who I met for the first time in Atlanta after knowing her for three years, she is an NYer to her core, and I’m so happy to find that we share the love of so many books! We will always share Sebastian! 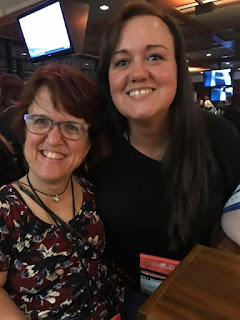 Meeting Ed Davies was freaking great, and he gives the best hugs, just so you know! Getting to sit down to talk and share a couple of meals with Dawn Marie again after GRL is always fun.  Talking to Felice Stevens just made me a wee bit smarter and in awe of her and her rockstar brain! Meeting Karen Stivali, an amazing author, for the first time was great. Seeing Lane Hayes again was truly a delight, and meeting Brooke Blaine for the first time was great and love that she gives Devon such a hard time. And Doc was as awesome as I thought she’d be and she is another strong person that you cannot roll over in life!

These people made this trip for me. In my opinion, RT was the people. The few panels I went to were excellent and informative, but most I passed since they didn’t seem all that appealing and I didn’t know the panelists that would be educating me in them. I learned more sitting around talking to other authors, these people, then I think I ever would’ve in the panels. So yes, it was huge and overwhelming, but the people made it fan-fucking-tastic! 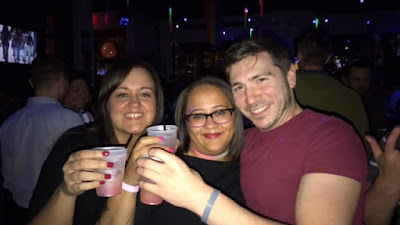 Posted by Diverse Reader at 5:12 PM