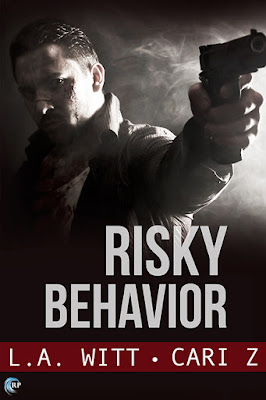 
It’s day one of Darren Corliss’s career as a detective, and not only has he been assigned a notoriously difficult partner, but the guy might also be a pill-popping dirty cop. Internal Affairs needs proof, and Darren gets to be their eyes and ears whether he wants to or not.

Detective Andreas Ruffner doesn’t play by the rules, and he doesn’t play well with others. With bodies piling up and a list of suspects who are way above his pay grade, the last thing he needs is a wet-behind-the-ears kid for a partner. Or babysitter. Not even if that partner is easy on the eyes.

As Darren gains Andreas’s hard-won trust, they both realize there’s more than just mutual suspicion simmering beneath the surface. But their investigation is heating up as quickly as their relationship, and Darren has no choice but to go along with Andreas’s unorthodox—and borderline unethical—methods. As IA puts the squeeze on Darren to give up the man he’s falling for, he has to wonder—is Andreas the only cop left in this town who isn’t dirty?

Welcome to the Riptide Publishing/Cari Z/L. A. Witt blog tour for Risky Behavior, book 1 of the Bad Behavior series!

Every comment on this blog tour enters you in a drawing for a choice of one eBook off each author’s backlist (excluding Risky Behavior) and a $10 Riptide Publishing store credit. Entries close at midnight, Eastern time, on May 6th.  Contest is NOT restricted to U.S. entries.

Cari Z was a bookworm as a child and remains one to this day. In an effort to combat her antisocial reading behavior, she did all sorts of crazy things, from competitive gymnastics to alligator wresting (who even knew that was legal!) to finally joining the Peace Corps, which promptly sent her and her husband to the wilds of West Africa, stuck them in a hut, and said, "See ya!" She also started writing, because some things she just thought she could do better. She's still climbing that ladder, but can't stop herself from writing, or from sharing what she creates.

Cari enjoys a wide range of literary genres, from the classics (get 'im, Ahab) to science fiction and fantasy of all types, to historical fiction and reference materials (no, seriously, there are so many great encyclopedias out there). She writes in a wide range of genres as well, but somehow 90% of what she produces ends up falling into the broad and exciting category of m/m erotica. There’s a sprinkling of f/m and f/f and even m/f/m in her repertoire, but her true love is man love. And there's a lot of love to go around.

Cari has published short stories, novellas, and novels with numerous print and e-presses, and she also offers up a tremendous amount of free content on Literotica.com, under the name Carizabeth.

Connect with Cari at http://cari-z.net/  or via her blog, http://carizerotica.blogspot.com/

L.A. Witt is an abnormal M/M romance writer who has finally been released from the purgatorial corn maze of Omaha, Nebraska, and now spends her time on the southwestern coast of Spain. In between wondering how she didn’t lose her mind in Omaha, she explores the country with her husband, several clairvoyant hamsters, and an ever-growing herd of rabid plot bunnies. She also has substantially more time on her hands these days, as she has recruited a small army of mercenaries to search South America for her nemesis, romance author Lauren Gallagher, but don’t tell Lauren. And definitely don’t tell Lori A. Witt or Ann Gallagher. Neither of those twits can keep their mouths shut . . .

To celebrate the release of Risky Behavior, one lucky winner will receive an ebook from each Cari and Lori’s backlist and a $10 Riptide credit! Leave a comment with your contact info to enter the contest. Entries close at midnight, Eastern time, on May 6, 2017. Contest is NOT restricted to U.S. entries. Thanks for following the tour, and don’t forget to leave your contact info!

Posted by Diverse Reader at 4:38 AM