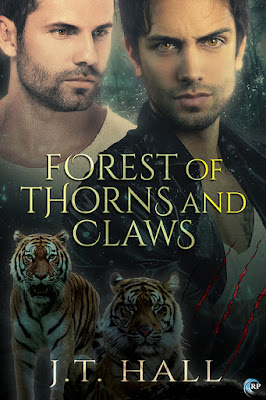 
Donovan McGinnis, a veterinarian and conservationist at a research center in Sumatra, is fighting to save the rainforest from poachers and politicians alike. One day he discovers a tigress trapped by a snare, and while treating her injuries, she bites him. He becomes ill with strange symptoms that leave him feverish and dreaming of the jungle and blood.

Kersen and his family are part of the Siluman harimau, a clan of tiger shifters hidden away in a secret village near the rainforest. When Kersen’s sister is caught, he knows he must free her before she infects someone with their magic and reveals their secret.

But Donovan has already been turned, and only time will tell if he can control the tiger within. Kersen must help him, but will the fierce attraction between the pair bring ruin to them all? With the rainforest under threat from outside forces, they may be doomed anyway, unless Kersen and Donovan can find a way to defeat the danger from inside and out.

Hello and welcome to the blog tour for Forest of Thorns and Claws! This M/M shifter (weretiger) romance is a standalone novel set in the rainforests of Indonesia. The book features a lonely veterinarian and wildlife conservationist from the UK, Dr. Donovan McGinnis, who meets a man from the local Sumatran village, Kersen, after rescuing a snared tigress. I hope you'll read on to learn more about Donovan and Kersen’s adventures.

Also, remember to leave a comment on this post... one lucky winner will get a $15 Riptide gift card!

J.T. Hall has been writing for many years under this name and others, and has appeared in magazines, anthologies, and online books. She earned her BA in creative writing from the University of Arizona, her Master’s in education from Argosy University, and works as an independent technical writer for state and federal programs. In her free time, she volunteers for the LGBT community and is active in the leather scene. She has a teenage daughter and a partner of over ten years. They live in sunny Arizona with three adorably cute dogs, three black cats, and a hamster who loves peanuts.

To celebrate the release of Forest of Thorns and Claws, one lucky winner will receive a $15 Riptide credit! Leave a comment with your contact info to enter the contest. Entries close at midnight, Eastern time, on May 20, 2017. Contest is NOT restricted to U.S. entries. Thanks for following the tour, and don’t forget to leave your contact info!

Posted by Diverse Reader at 2:01 PM