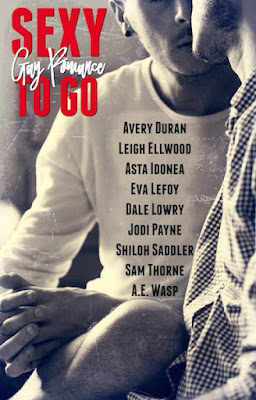 Sexy to Go Gay Romance features nine scorching hot MM romances to make your blood sing. Whether finding love at a Jewish singles dance or while crossing the River Styx, these men remind us that love is always worth fighting for, no matter what the cost. Meet a handyman who’s an ace with his tools, a king who kindles the passion of a Greek god, and an architect who erects more than buildings. From the everyday to the fantastical, these stories explore male-male love in all its simmering intensity.

Matzo Ball by Avery Duran
When Jacob’s outgoing best friend talks him into attending a party for Jewish singles, neither man realizes that it’s not a gay event. Things go from bad to worse when Jacob’s friend doesn’t show up. The night turns around when Jacob befriends Ian, a sexy bartender. After a spectacular kiss good night, they go their separate ways. But Jacob can’t forget the chemistry he shared with Ian, and hungers for more. In a city the size of New York, will these men be able to find their way back to each other?

Styx & Stone by Leigh Ellwood
What's the afterlife really like? Charon the ferryman knows the River Styx like the back of his hand, and he enjoys giving newly departed Stone the full tour.

First Swallow of Spring by Asta Idonea
The first swallow of spring draws Seanán back to the fae circle each year, where he dances with the handsome fae lord, Iorweth. He knows the four rules he must follow if he wishes to be free to leave at the end of the night; however, Iorweth is growing ever more inventive in his attempts to trick Seanán into breaking them.

How Hercules Got His Bruise by Eva Lefoy
Hercules might have completed his 12 labors and become immortal, but he's still not out to himself. Until he meets Sisyphus, a man who turns him on in ways not even a goddess can compete with. When Zeus threatens to destroy their new bond, Hercules must again rise to the challenge, this time to protect his right to love a man.

Loggerhead by Dale Lowry
Soon after they fall in love, Jake makes Eric a promise inspired by an old track uniform. But demanding work schedules at Jake’s four-star restaurant and Eric’s newspaper keep them from following through. Six years later, they take the honeymoon they never had, heading to the Florida coast in search of sea turtles – and rekindling their passion for each other in the process.

Handyman by Jodi Payne
Danny is haunted by memories of his ex, Peter, who moved out six months ago. He recognizes just how bad off he is when he wakes up to a flood in his condo, a problem Peter would have adeptly handled. Danny can't find the insurance paperwork, he doesn't know who he should call first, and he's about ready to strangle his stoner neighbors. His day starts looking up, though, when the workmen arrive to deal with the water, replace his breaker box and demolish the soaked ceiling. Ken, a handyman, shows up to handle the drywall, but can Danny handle Ken?

Clipped Wings by Shiloh Saddler
When a male swan shifter is captured by a cruel master he develops feelings for another male slave. The master has plans for the shifter that go against every fiber of his being. Will the two men bow down to their station in life or take flight to keep their love alive?

Rebuilding the Future by Sam Thorne
Allen's peace has been seriously disturbed. As the shy architect takes on the task of extending the home he inherited from his late aunt, his life becomes a battle. The building work is going fine, but he can barely contain his one-way lust for sexy foreman Declan, who's a one-man generator of testosterone and mixed messages. As the build completion approaches, Allen's ready to do just about anything to keep Declan around a little longer...

From How Hercules Got His Bruise by Eva Lefoy

Early morning found Hercules at the edge of the driest, least hospitable spot on Earth. A desert so far in the middle of nowhere, not many had ever passed through. As the sun beat down mercilessly on the parched dry soil, not a bird’s trill came to his ears. But he did hear one sound that repeated itself over and over. A scraping, rolling, and grunting came from up ahead. From this distance, he could just make out the figure of a man toiling with a giant rock at least ten times his size on a steep slope. Intrigued by the feat of strength, Hercules quickened his steps.
As he neared, the image enlarged, filing his vision with a sight so wondrous he dropped his parcel and watched, riveted. The man before him must be Sisyphus, but it wasn’t the Sisyphus he’d imagined. Far from a spindly, weak, lazy former ruler, the goliath pushing the boulder was neither pampered nor soft. He wore only a thin loincloth stretched across rounded tight buttocks. Underneath the fabric, thick muscles moved and bunched as Sisyphus bent to his task, both feet braced on the mountain. Above the finely sculpted ass, a narrow waist and sensuously curved back supported shoulders nearly as massive as Hercules’ own. The corded muscles in these quivered as Sisyphus wrapped his arms around the boulder and heaved. Hercules drew his breath and held it, mildly aware of a tingling low in his groin, as Sisyphus began his uphill journey.
Minutes stretched into hours as Hercules stood mesmerized, forgetting the heat, forgetting his thirst, focused only on Sisyphus’s supple grunting form as he pushed and rested, pushed and rested his way up the slope. About halfway up Sisyphus stopped, bracing the boulder against the side of the hill with a smaller rock that didn’t even appear large enough to hold its weight. But Sisyphus apparently knew what he was doing. He turned, leaned his back against the boulder, and wiped his brow. Then he lifted his face toward the sky.
For the first time, Hercules took in the full glory of Sisyphus. “Oh my god. He’s beautiful.” Pectorals swollen with work stood out proudly from his chest, leaving no flat planes from shoulder to shoulder. Effort-hardened biceps curved in muscular cascades from shoulder caps to elbows, tapering into thick forearms. Beneath his chest, six rows of abdominals rippled proudly with each breath and Hercules found his mouth watering at such perfection.
Even Sisyphus’ tree-trunk thighs were stunning. Each of his sculpted quadriceps bulged, competing with the others for space in a riot of masculine fervor. Hercules couldn’t help imagining those thunderous thighs trembling in passion, couldn’t stop himself from picturing what lay underneath Sisyphus’ loincloth nor what his groans of release might sound like.