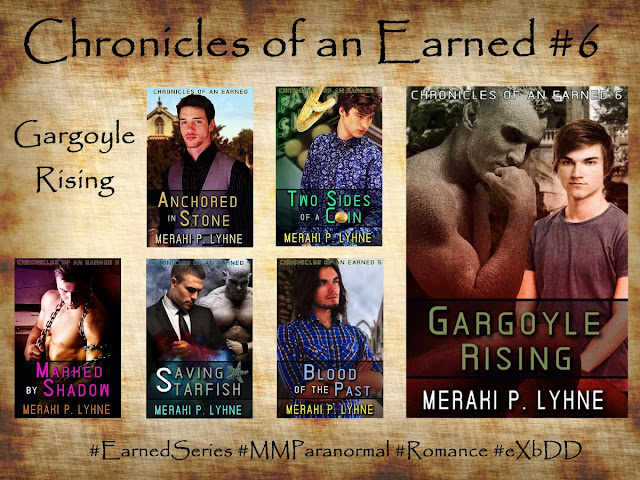 With the 6th book in Meraki P. Lyhne's Chronicles of an Earned series releasing soon, Diverse Reader is promoting the entire series. Be sure to check this series out and read up so that you can grab book six, Gargoyle Rising soon! At the end, there's a giveaway to win one book in this series so be sure to enter!

The demigod race “Earned” live among mankind and serve their souls. It’s usually a pretty straightforward purpose and a calm life for these ancient beings, but when a half-breed is born into their ranks, all sorts of problems arise.

Kaleb was born in a convent in France in 1593. Sixteen years later the inquisition deemed him a witch and burned him at the stake. But he didn’t die. He couldn’t burn. The Church had another weapon against his kind, though, and they anchored him in a stone.
Four hundred twenty years later, a thief named Alex Rhoden is sent on the easiest heist of his career. Getting Kaleb’s anchor stone was easy. But he wasn’t the only one looking for it.

Chronicles of an Earned is a series where you’ll meet the entire spectrum of the paranormal. Where good and evil isn’t black and white, where Angels can be wrong, Demons not always the evil ones, and where witches, warlocks, and wizards aren’t as clear cut as general culture has you believe. Here, historical and mythological facts are twisted but kept as reliable and true to their sources as possible. All this with a side dish of hot and sweet MM. 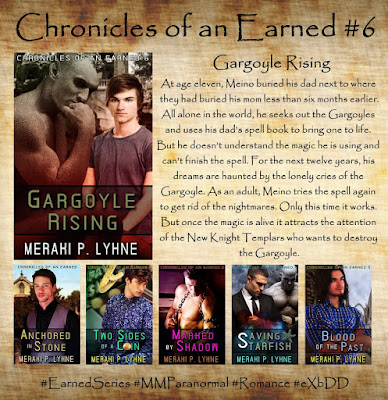 Chronicles of an Earned #6

Blurb
An old spell book let him breathe life into a Gargoyle. With its rise come new enemies, but also the possibility of new friends.

At age eleven, Meino buried his dad next to where they had buried his mom less than six months earlier. All alone in the world, he seeks out the Gargoyles and uses his dad’s spell book to bring one to life. But he doesn’t understand the magic he is using and can’t finish the spell. For the next twelve years, his dreams are haunted by the lonely cries of the Gargoyle. As an adult, Meino tries the spell again to get rid of the nightmares. Only this time it works. But once the magic is alive it attracts the attention of the New Knight Templars who wants to destroy the Gargoyle.

Nathan and Lucien have settled into a routine at the school where Nathan studies to be able to help the Order. Just as life is calming down, it all takes a turn. News that a protégé is in danger, and that Nathan’s beloved Professor Nigel Gershman has died, is just the beginning. Once again, Nathan and Lucien are moved about to assist the Order, and new magic brings out a hidden enemy.

Enter the rafflecopter to win a reader's choice of any one book in
this series!
Contest will end on  May 9th!
Thanks!

a Rafflecopter giveaway
Posted by Diverse Reader at 2:25 PM