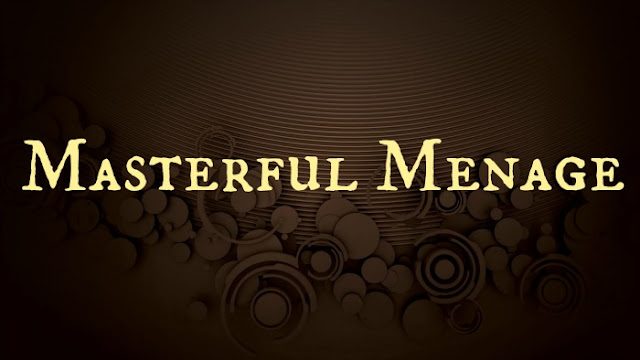 As you are all aware, today is Saturday and that usually means it's Author Saturday Spotlight! Well, the author set to be here today had a family emergency so I had to come up with something clever to fill this slot. A reader of the blog, Em, (I don't want to use their full name as I haven't asked if I could) Came up with the idea that I should talk about top favorites in tropes. I thought and thought and realized that was a great idea. Now, what trope? Since menage is one of my top three (LOL) favorite tropes that's what I chose to deal with today.

I have read many menage stories and there are so many lovely ones I picked some that I remembered off the top of my head because they checked off all the boxes. I'm ridiculously picky about my menage. I believe on top of the physical element there must be a psychological one. It must make complete sense in all areas. I love seeing how the mind works so to understand three people in a serious relationship I HAVE to believe it.

As I said, I put together some and yes I'm aware I'm missing many but a blog post can only be so long. Of course, I'm happy to talk about it with all of you so ask me here or as you know I'm on FB and everywhere.

At the end, there is a giveaway where I will gift one person one of these books. It will be through Amazon. Sit back and relax.... 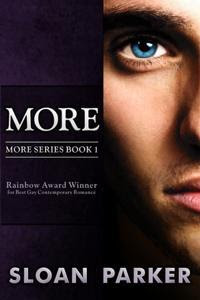 For fifteen years Luke Moore has lived by three rules: stay off his father's radar, never spend more than a single night with any man, and never fall in love again. But one night of explosive sex and two men he can't get out of his head have Luke breaking every one of his rules. Richard and Matthew push him past all his boundaries—both sexually and personally—and now he's no longer hiding from his senator father. He's taking him on. And he isn't just falling for one man. He's falling for two. If you're going to break the rules, might as well break them big.

But Luke's father has his reasons for hating how his son lives, and he'll do whatever he can and use all his power to keep Luke away from Richard and Matthew. 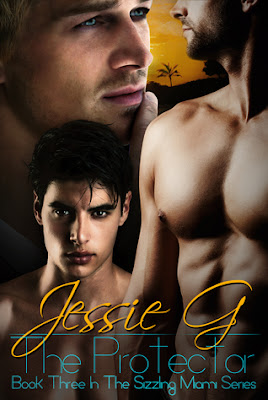 Javier Escardo had been praying for death, but never expected the stone cold killer he got in response. One glimpse into those sinful eyes reveals not only the promise of retribution, but a reason to live. Seven years later, free and mostly sane, Javier is determined to take what belongs to him. Saul’s heart. Through hell and back, through layers of pain and shifting realities, that one truth has remained firm. His protector needs saving and he can’t do it alone.

Hidden beneath the public persona, Kyle Jansen is a man who craves to be invisible without being insignificant. He longs to find a Master who will see his need to be taken over without abusing him and a lover who will care about him beyond the sexual games. It isn't until he encounters the smoldering combination of Saul and Javier that he realizes it was never supposed to be just one partner at all.

Can two battered hearts be mended by the love of a third? Kyle becomes the light to their darkness, and he’s willing to risk his heart for theirs, but when the past threatens Saul, will Javier’s sacrifice destroy them all? 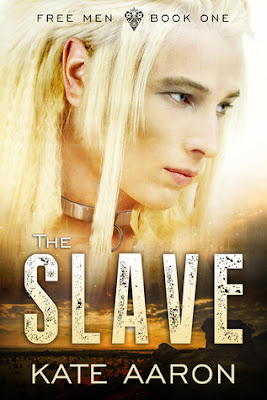 Free Men Series (Trilogy) by Kate Aaron.
They have to be read together. Book One The Slave is FREE on all platforms.

Freedom is only an illusion.

At twenty-seven, Tamelik has been a slave more than half his life. Submissive by nature, he can’t help but fall in love with the master who treats him kindly.

When the mistress walks out, Tam dares to hope his love will be enough.

Then he’s ordered to purchase another slave.

He wants to hate Kai for being unruly and ungrateful. For being of the same race as the men who murdered his family. For being his eventual replacement in their master’s bed. But it’s hard to hate a man who cries himself to sleep, flinches at the slightest touch, and blushes beautifully when he’s kissed.

THE FREE MEN SERIES:
THE SLAVE
THE SOLDIER
THE MASTER
Links:
The Slave: Amazon
The Soldier: Amazon
The Master: Amazon 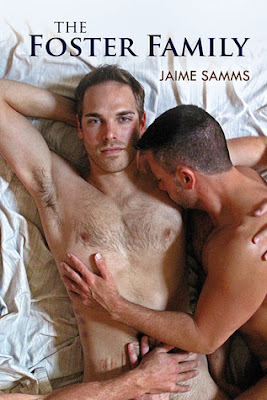 The Foster Family by Jaime Samms

Growing up in foster care has left Kerry Grey with little self-esteem or hope for his future. A college dropout, Kerry scrapes by on a part-time job at a garden nursery. His friendship with his boss and working with the plants are the only high points in Kerry’s life. He’s been dating the man who bullied him at school, but when his boyfriend abandons him at a party, Kerry wanders down the beach to drown his sorrows in a bottle of scotch.

Malcolm Holmes and Charlie Stone have been together for fifteen years. Despite Charlie's willingness to accept Malcolm's unspoken domination in bed,something is missing from their relationship. Early one morning, they rescue a passed out Kerry from being washed away by the tide and Charlie immediately senses a kindred spirit in the lost younger man. When Kerry’s roommate kicks him out, Malcolm and Charlie invite him into their home. As Charlie and Kerry bond over Charlie’s garden, Malcolm sees Kerry may be just who they have been looking for to complete their lives. All they have to do is show Kerry, and each other, that Kerry's submissive tendencies will fit their dynamic.

But someone is sabotaging Kerry at every turn. As he struggles to discover the culprit, he fears for the safety of his new friends. If Malcolm and Charlie cannot help, their lifelong search for their perfect third may not end with the happily ever after they imagined. 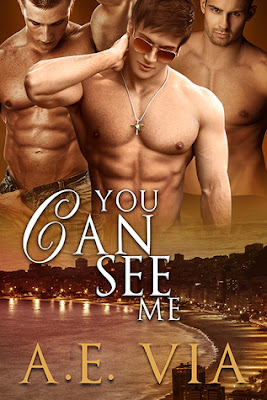 It takes more than perseverance to recover from tragedy...you also need love.

Following a horrific accident that leaves him blind, renowned chef Prescott Vaughan loses his fiancé and all hope for his career. Recovery and confidence in his skills come slowly, along with feelings he hasn’t experienced in a long time when he meets his new neighbor, Dr. Rickson Edwards.

Unlike Prescott, Ric is open about his attraction to men yet has issues that complicate their relationship. A brief separation threatens his hopes for an eventual reunion when Prescott befriends the handsome aspiring chef Blair McKenzie, who wants more than cooking advice.

Ric doubts Pres can let go of the charming southerner, but after an encounter with the sinfully sexy man, he can't help his attraction as well. Pres feels he must choose but realizes…does he have to? 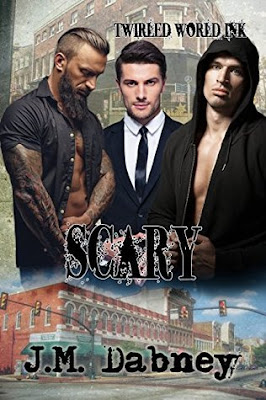 Gene Sheridan earned the appropriate nickname when Legend Gib Phelps employed him at Twirled World Ink—Scary. No one made it out of his old neighborhood without scars both mental and physical. At one time, Scary thought he had a chance that is until his ex-boyfriend discovered slumming with someone like him wasn’t worth his trust fund. No-strings hookups became his go-to when he needed to relieve some tension. Co-owning a bar called Brawlers with his best friend, Tank, made it easy to find a body to use for the night. If not happy he was content with his life, but one man made content seem like such a terrible thing.

Elijah Vaughn worried about everything. His life was put on hold at eighteen when his mostly-absent parents died on one of their many adventures leaving him to raise his six-year-old brother, Brody. He’d never had anything or anyone that was just his. When Brody met a tattoo artist named Trouble, Elijah hadn’t realized how much it would change his life too. He met a huge man named Scary and how the man made him feel terrified him.

Tank Davis lost his voice the night he was attacked and had this throat slit ear-to-ear. It kept him in a world of silence. Silent and intimidating, he scared off more men than he drew to him. His best friend Scary and him made a life for themselves in small town Georgia with their bar Brawlers. Most night everyone could find him working security at the door. Scary called in a favor, and Tank met the one man he couldn’t resist, proper and upstanding Elijah Vaughn.

Can one man accept that there’s not one perfect man for him, but two damaged souls who need him to be whole?

Author's Note: Although this is the first book in a series each book is standalone and every book deals with a separate couple. 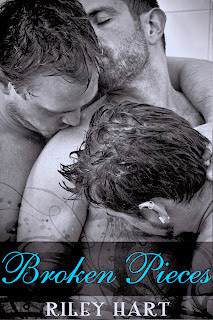 Josiah Evans is the orphan who lost both his parents. He’s sweet, shy, and all heart. He wants nothing more than to be loved.

Mateo Sanchez is the son of a gang leader. He’s seen it all, and never hesitates to do what needs to be done, no matter what it is.

Tristan Croft is the wealthy attorney who clawed his way up from the bottom to rule his own world. He’ll never depend on anyone but himself again.

Three men who couldn’t be more different…and yet, as their lives intersect they find an uncommon balance that calms the storms inside each of them, and ignites fires hotter than they ever thought imaginable.


Told uniquely in three parts and spanning over ten years, BROKEN PIECES is a journey of healing for three fragmented souls, finding love in the unlikeliest of places—with each other.

Untouchable Beauty Meraki P. Lyhne
(Part of an ongoing series The Cubi)
Love all the books. 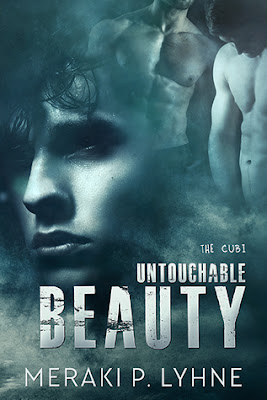 Business school is not for Daniel. Not after making the cover of Teen Model. The only problem is that his parents don’t agree, and Daniel skips school to set his plans for fortune and fame in motion. Meeting the award-winning photographer Heimli will change his life, but not in the ways the nineteen-year-old young man expects.

At the age of four hundred thirty-six, Seldon has fed on more beautiful men than he can remember. Living in seclusion from the human world, humans are brought to the Incubi and Succubi as slaves to feed on. Amongst these slaves are the rare Untouchables. When Seldon is entrusted with the safekeeping of one, he has his work cut out for him—especially since this Untouchable gets on his nerves. And under his skin.

Enter the giveaway to win one book featured.
Contest will end on May 12th.
Thanks!


a Rafflecopter giveaway
Posted by Diverse Reader at 6:37 AM