Charity Auction for Men at Risk in Chechnya ~Blog Post I am an American. There are battles I fight in this country for equal rights, for humanity, for our children, and for minorities. Sometimes it feels like I’m suffocating in injustice, being swarmed by hate. I’m shocked every day, even when I didn’t think that was possible anymore.

But, across oceans, over mountains, through forests, there are battles going on I think WE can’t even fathom. We don’t realize the horrors of some people’s reality. Too often it’s an out of sight out of mind thing. We need to shine a light. People can’t rest when something goes right because something is going wrong somewhere else!

The other day I heard someone complaining about something so trivial and I simply said, “Do you know what’s going on in Chechnya to the LGBT community? To men who love men. To people who want to be left alone to love? Do you?” They had no idea and I wanted to cry.

I’ve been following this for a while. Reading articles from the voices of gay men and what it’s like for them. They go something like this:

Maksim said it had started with a chat room conversation with “a very good old friend who is also gay,” and who suggested that they meet at an apartment. When Maksim arrived, however, he was greeted not by his friend but by agents who beat him. Later, they strapped him to a chair, attached electrical wires to his hands with alligator clips and began an interrogation.

“They yelled, ‘Who else do you know?’” Maksim said, and zapped him with current from time to time. “It was unbearably painful; I was hanging on with my last strength,” he added. “But I didn’t tell them anything.” (Copied from NY Time April 21, 2017)

Or from people who aren’t LGBT being interviewed living with blinders on. Thinking responses like this are valid:

“Under Islam, lying with a man is a sin,” he said. “People don’t approve of homosexuals here in Chechnya. If anybody tries to start a gay movement here, they will be killed.” (NY Times April 23, 2017. Quote by anonymous man who believes the crackdown on gays is wrong but claims he knows no gays)

Yes, this nightmare is many people’s reality. Do you know what’s going on in Chechnya?
The raw facts? Homosexual men are being rounded up and thrown into camps, or just disappearing. So far, over 100 men, suspected of being homosexuals, have gone missing, with at least three of them turning up dead.

One survivor of the camps that have sprung up to imprison these men recounts:

The survivor, who managed to escape from one of the homosexual torture camps, told France 24 News that police told parents of gay men to “sort it out” or risk authorities taking matters into their own hands.

“They tell the parents to kill their child. They say, ‘Either you do it, or we will,’” the man said.
“They call it: ‘Cleaning your honour with blood.’

He tells of one man who was tortured for several weeks, before his parents and brothers were called in.
“The authorities said to them: ‘Your son is a homosexual — sort it out or we’ll do it ourselves’.”

Is this tough to read? It should be! BUT YOU CAN HELP! You can fight as hard as you’ve been fighting where YOU live to fight where THEY live…. How? Here’s how…. 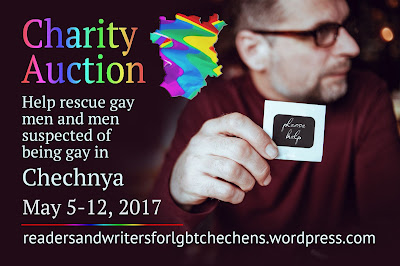 Readers & Writers for LGBT Chechens will host an online charity auction May 5–12 to benefit the Russian LGBT Network, ILGA-Europe, and Rainbow Railroad. These organizations work directly with gay men and other persecuted LGBT people from Chechnya and the northern Caucasus, providing assistance and helping them get to safety.

And all May, authors, and publishing companies are running special promotions in which proceeds from book sales go to support these organizations. Check out our ever-growing list of books that save lives.
You can also find out how to donate directly to the designated charities by visiting Readers & Writers for LGBT Chechens.

Readers & Writers for LGBT Chechens started out with a Facebook conversation between authors Dale Cameron Lowry and Olivia Helling in mid-April after news of the targeted imprisonment, torture and executions of gay men started coming out of Chechnya. Other authors quickly got involved, and the effort snowballed from there

We’re also maintaining a newsfeed with updates about the situation in Chechnya and what  charities are doing to help. You can check it out here.

If you're an author who would like to get involved, please sign up at Authors & Publishers for LGBT Chechens. There, you can also find answers to frequently asked questions about the auction, royalty donations, the charitable organizations that are helping out LGBT Chechens, and more. Deadline for donating to the auction is May 4, but there is no deadline for signing up to donate royalties. 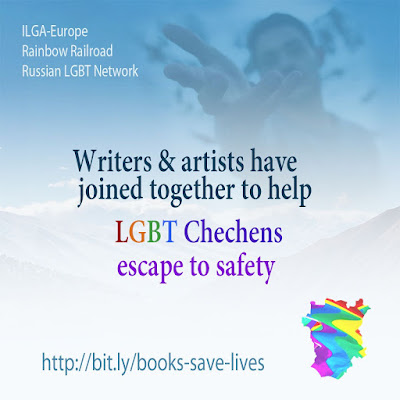