Blog Tour: While You See A Chance by Alexa Milne ~ Guest Post #Giveaway

You are never too old to set a new goal or to dream a new dream.


I was fifty-three when my first book was published, and am now heading towards the second half of my fifties. I still have hopes and dreams, even if they mostly concern getting a bungalow and hoping for days when my arthritis isn’t too painful. Up until recently, one of my biggest hopes was getting my story of two sixty-year old main characters, who find love again, published. I wrote While You See a Chance two years ago, and it has been through several edits to get to this stage. When Manifold Press said they’d take it on, I was overjoyed.

The thing is, people do get old as there is only one other alternative. At my age, although I like reading stories of young men finding love for the first time, I feel the need to read stories with characters who, like myself, have some life experiences. You see LGBTQA+ people get old too. I wanted to read about those characters so went in search and I didn’t find many. In the end, I did what they say you should and decided to write a story myself – the story of two men who meet again after nearly forty years apart. Sion and Phil had been childhood friends in South Wales, but had gone their separate ways. Now Sion and Phil have returned and meet again. Phil is divorced and Sion bereaved. This story explores rediscovering love, second chances, and what people will do to be together both now and in the past.

Older LGBTQA+ issues have been in the news recently, from the ninety-five-year-old man who decided it wasn’t too late to come out, to another man, also in his nineties, who decided to become the woman she’d always believed herself to be. My local news also had a story of the first retirement community in Manchester, where more than half of the residents will be LGBTQA+.

Being gay and old can be problematic if you are in hospital, or have to go into a home, and are afraid of how the staff and others will react to you and maybe your partner. One of the worst issues before civil partnership and same sex marriage became legal, involved losing your home because your partner’s family swooped in and threw you out, or not being allowed to be there if your partner fell ill because you had no power to make decisions. I remember reading some years about how when a well-known actor died, his partner of many years lost everything.

When I was born, homosexuality for men was still illegal in the UK. Thank goodness times have changed, and now more than sixty percent of the UK population agree with gay rights. There is still a way to go, but as someone who taught for thirty years and witnessed the attitudes of young people change so much that several pupils came out while at school, I have great hope of this percentage increasing.

I’d love the number of romance books featuring older characters to increase. We need stories that give us hope and show happiness is possible, even when our knees creak and our backs hurt, and maybe swinging from the chandelier is a little impracticable. I hope While You See a Chance achieves this as it weaves together the stories of three couples over time. You really are never too old to dream, or to take a chance. 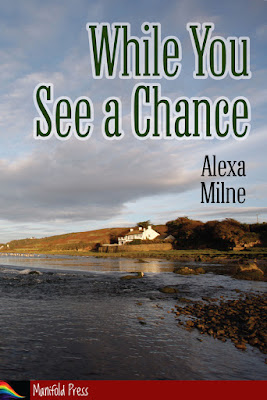 As children growing up in South Wales, Sion, Phil and Helen were known as the Three Musketeers, always together and never apart - but time moves on. Sion left to lecture in history at Yale. Phil married Helen because it seemed the obvious thing to do, and they settled down to life in Manchester.


Now all three are approaching sixty. After the death of his partner, and wanting to solve a family mystery, Sion returns to his childhood home to start again. When Helen announces she wants a divorce, Phil also returns home, to a new teaching job, and to renovate the ruin of a house he and Sion once dreamed of living in.

Originally from South Wales, Alexa has lived for over thirty years in the North West of England. Now retired, after a long career in teaching, she devotes her time to her obsessions. Alexa began writing when her favourite character was killed in her favourite show. After producing a lot of fanfiction she ventured into original writing. She is currently owned by a mad cat and spends her time writing about the men in her head, watching her favourite television programmes and usually crying over her favourite football team.