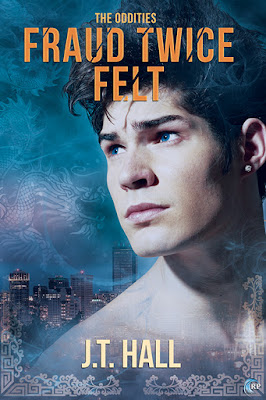 
Three weeks after solving his old boyfriend’s murder, bounty hunter Derwin Bryant is trying to let go of the past and embrace his new life with Elliot Leed, a former rentboy and fellow Oddity. Elliot, meanwhile, is trying to adjust to working at Bob’s Bail Bonds and having a real relationship despite his strange power of Object Reading. Hanging over the couple is the fear that Roy Yoshiro, notorious gang lord, will make good on his threats to claim Elliot. If that happens, not even Derwin’s superhuman strength will be enough to protect the man he loves.

Their concerns are overshadowed when Derwin’s friend asks for help finding her missing son. It’s not long before the case takes Derwin and Elliot back to the crime-ridden underbelly of the city and straight into Yoshiro’s clutches. Two gangs are vying for power, and Derwin and Elliot get caught in the middle of their very public fight.

Derwin and Elliot must find a way to thwart both gangs’ plans and escape alive. This time, one misstep could spell disaster for all the inhabitants of Nis.

About The Oddities Series

The government wants to control Oddities. Regular people condemn them. And the corporations want to study their DNA . . .

Derwin Bryant is a bounty hunter, a demon hunter, and has an Oddity that allows him to feed on pain to increase his strength and speed. Elliot Leed is a rent boy turned private investigator with a rare Oddity of his own—the ability to read objects with strong emotional imprints. Together they take on cases that no one else can, in a city full of corruption, crime, and the forgotten poor.

It's a tough place for two men in love to make a difference.

Check out The Oddities! http://www.riptidepublishing.com/titles/series/oddities

5 Fun Facts about Me

I’m the one who always cringes and hides when asked to come up with “fun facts” about myself. I tend to be an intensely private person and careful about what information I give out. This goes back to a yucky divorce where my ex’s new wife would Google me all the time, trying to dig up dirt that could be used against me. These days I’m less concerned since my daughter’s turning seventeen this year and there’s no more fears about custody battles.

1. I grew up with horses and used to ride hunter/jumper.

This means that while riding my horse I enjoy having the horse leap over obstacles. It doesn’t matter that I also happen to be allergic to horses. There’s nothing like the feel of a powerful animal beneath you running fast, the wind in your hair and the feeling of working together to prepare for a jump, then the second or two of weightlessness. It’s like flying.

My favorite game is Skyrim, but I also play Assassin’s Creed, Borderlands, Shadows of Mordor, and recently I’ve been playing Tom Clancy’s The Division. This last one I play with my partner and her friend, all of us with our headsets on and on separate screens. It’s a great stress reliever to battle rogue gangs, chop up zombies, or kill dragons and eat their souls, lol.

3. I’m fairly fluent in German, can speak some French, and some rudimentary Japanese.

I took eight years of German in high school and college and was also an exchange student, but I’ve grown rusty from lack of use. I learned French while married to a French Canadian whose parents didn’t speak English. And as for the Japanese, I learned some before my current partner and I visited Japan. While there, she made me do all the talking, because if she opened her mouth, they’d start talking super-fast. (She’s Japanese American but knows about as much Japanese as me, which isn’t much.) At least if I spoke, they’d use English if they knew any, or they’d speak slowly otherwise. It made for a few comical conversations.

4. I enjoy cooking, and I make a really good homemade sour dough bread.

I’m also known for my margaritas and roast lamb. While I enjoy trying new recipes, I’m not gifted with any particular talent at cooking, so not everything’s a hit.

5. And last, I collect frogs—figurines, that is, not live ones.

I don’t know why, but I find frogs adorable with their buggy eyes. I think it goes back to watching Kermit the Frog on Sesame Street and The Muppets while I was a child.

Hopefully you’ve enjoyed these fun facts about me! And I hope readers enjoy my latest release, Fraud Twice Felt, Book 2 of the Oddities series.

J.T. Hall has been writing for many years under this name and others, and has appeared in magazines, anthologies, and online books. She earned her BA in creative writing from the University of Arizona, her Master’s in education from Argosy University, and works as an independent technical writer for state and federal programs. In her free time, she volunteers for the LGBT community and is active in the leather scene. She has a teenage daughter and a partner of over ten years. They live in sunny Arizona with three adorably cute dogs, three black cats, and a hamster who loves peanuts.

To celebrate the release of Fraud Twice Felt, one lucky winner will receive a $20 Riptide credit and an ebook from J.T.’s backlist! Leave a comment with your contact info to enter the contest. Entries close at midnight, Eastern time, on June 3, 2017. Contest is NOT restricted to U.S. entries. Thanks for following the tour, and don’t forget to leave your contact info!

Posted by Diverse Reader at 9:55 AM