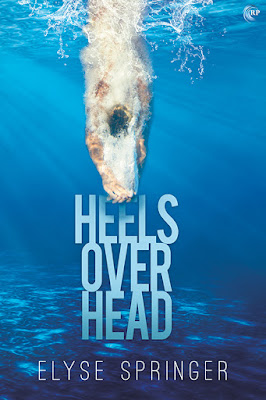 
Jeremy Reeve is one of the best divers in the world, and he’s worked hard to get where he is. He intends to keep pushing himself with one very clear goal in mind: winning gold at the summer Olympics in two years. That medal might be the only way to earn his father’s respect as an athlete.

Brandon Evans is everything Jeremy isn’t: carefree, outgoing, and openly gay. With his bright-blue eyes and dramatic tattoos, he’s a temptation that Jeremy refuses to acknowledge. But Jeremy can’t ignore how talented Brandon is—or that Brandon has no interest in using his diving skills to compete.

They’re opposites who are forced to work together as teammates, but Jeremy’s fear of his own sexuality and Brandon’s disinterest in anything “not fun” may end their partnership before it begins. Until a single moment changes everything, and they help each other discover that “team” can also mean family and love.

Hello, and welcome to the blog tour for Heels Over Head, my new sports romance where Olympic diving hopefuls battle it out on the platform... while discovering friendship, family, and love along the way. I hope you enjoy reading Jeremy and Brandon's romance as much as I enjoyed writing it!

I'll be stopping on several blogs throughout the week, so I hope you'll follow along and join in the discussion. Plus, don't forget to leave a comment at the end of the post... you'll be entered to win an Amazon gift card!

Jeremy
August (24 months until the Olympics)

To celebrate the release of Heels Over Head, one lucky winner will receive a $10 Amazon gift card! Leave a comment with your contact info to enter the contest. Entries close at midnight, Eastern time, on June 3, 2017. Contest is NOT restricted to U.S. entries. Thanks for following the tour, and don’t forget to leave your contact info!