Blog Tour: To Love and To Cherish by Addison Albright #Review #Excerpt #Giveaway 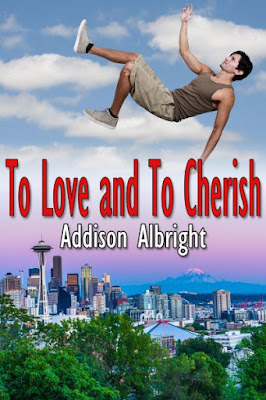 BLURB Will Nash find love again? Of course he will. Will he go about it in the usual manner? Now that’s another story entirely. Jilted by his fiancé two weeks before their wedding, Nash Marino’s outlook on life in general, and love in particular, is jaded. After months of couch-surfing, Nash is fed up. He’s sick and tired of his living conditions, worn out by the demands of his nursing job, and despairs of ever finding love again. In fact, he doesn’t think he’s capable of true love. Monogamy, commitment, companionship, and regular sex…that’s all he wants, and the sooner, the better. When Nash crosses paths with a like-minded man who’s also in need of a live-in nurse for a beloved relative, Nash figures all his problems are solved. Matters are complicated by a freak accident and amnesia. When Nash’s marriage of convenience scheme is muddied by notions of love after his memory reboot, will their plans go awry, or will Nash’s new outlook on life be just what the doctor ordered?

Buy Links: JMS Books | Amazon US | Amazon UK | Kobo | All Romance | OmniLit Find To Love and To Cherish on Goodreads Find the Vows series on Goodreads If you read 'Til Death Do Us Part than you remember Nash. Well all the YAY's because he got his own story!

Nash is heartbroken and with good cause. Nash's prior engagement shattered and he's unbelievably sad. He goes through the whole"No love is good love," mentality in this story.

The complexity the author brings to Nash's character is truly brilliant. I thought how Addison was able to weave the layers of him together to be amazing. He's sad, then gets amnesia, thinks he's not sad, then remembers, and is sad again and has to move on. Just wow!

There's a lot to love in this story; from the suspense to the conflict to the characters and where it and they will end up. There's angst for sure in this story but it wasn't as gut wrenching and soul crushing as 'Til Death Do Us Part, in my opinion. Overall it's a lighter read but no less dramatic.

Addison Albright fleshed out terrific characters, crossed over story lines in a way that you don't have to read 'Til Death Do Us Part (though I recommend it) and she built on to an already fascinating fictional world. 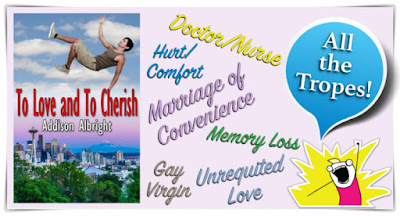 “Fuck dating. Let first impressions rule. I could’ve saved myself a world of hurt and heartache if I’d done that over the years. I don’t know why I stuck it out with some of my shitty boyfriends either. Wishful thinking, I guess. But you’re right, I knew practically instantly that my husband was going to be the love of my life. So yeah, don’t bother dating…simply ask him to marry you five minutes into the conversation. I’m sure it won’t scare him off or anything.” She accompanied that final instruction with a cocked eyebrow and one of her trademark smirks, as if the scornful tone she’d used wasn’t enough to keep the sarcasm from going over his head. Subtlety wasn’t Angela’s strong suit. “Sage advice.” He raised a spoonful of soup in salute, then brought it toward his mouth. Someone bumped his chair from behind. Nash rocked forward, and soup spilled down his chin. Angela stifled a snicker, and a male voice he recognized said, “Sorry about that.” Nash snatched up his napkin to wipe his face, and turned. “No problem, Dr. Burlingham.” Although it was, of course. He felt like a fool with chicken noodle dripping down his neck. Dr. Burlingham stood there looking at him with an odd intensity. Probably thinking Nash had a screw loose or was some kind of man-whore if he’d overheard much of Nash’s rant. Whatever, it was none of the man’s business, and Nash would hopefully not be working at this hospital—where the doctor’s opinion would affect him—for much longer anyway. After gazing at him for an uncomfortably long couple of seconds, Dr. Burlingham turned back to Dr. Gilbert Wilson, a friendly and outgoing pediatrician whose close friendship with Dr. Burlingham had long stymied the hospital grapevine. Dr. Wilson gaped at Dr. Burlingham with his own less-squinty version of Angela’s earlier side-eye. Except Dr. Wilson’s version was accompanied by a comical upturn to one side of his mouth, indicating his enjoyment of the scene—rather than concern for his friend’s mental health, as Angela’s countenance had implied. As soon as the two doctors walked around the corner, Angela burst into a fit of the chuckles that would have been better suited to the set of Dumb and Dumber. “Hardee-har-har,” was the best he could come up with in reply. Nash grabbed her napkin and crammed it down the front of his uniform to mop up the rest of the soup drippage. “Did you see the look on his face?” Angela managed to gasp between giggles. “Which one? The repugnance on Dr. Burlingham’s or the glee on Dr. Wilson’s?” The guffaws coming from across the table intensified and drew some curious glances as well as several censorious glares. “Seriously, Angela, you’re going to give yourself a hernia. It wasn’t that funny.” He nudged her bottle toward her and she took the hint, a couple deep breaths, and a slug of water. “Wasn’t repugnance,” she wheezed. “What are you talking about?” “The look on Dr. Burlingham’s face. It wasn’t repugnance. Closer to yearning.” “Don’t even.” Nash froze. “Right now your position on the hospital grapevine is scaring the shit out of me. Don’t. Even.” She held up a hand. “I wouldn’t. Calm down, sweetie. I’m stating facts, is all.” “There’s nothing remotely factual about that statement, so don’t start with me. And so help me, don’t even hint at joking about something that stupid on the pediatrics floor where Dr. Wilson might get wind of it.” She pointed a finger—or rather the finger—at him and bit out, “I’m not a fucking idiot.” No, she wasn’t. Nash eased back in his seat. And she was a good friend. He sighed. “Sorry. I know you wouldn’t. Just put it down to the stress, okay?” She gave his hand a squeeze and the tightness that had appeared in her shoulders visibly relaxed as well. “I’m sorry, too, sweetie. I shouldn’t tease you right now. I promise I would never start or feed any rumors about you, stupid or otherwise, but there truly was something in his look. I just want you to have a heads-up on that.” Nash closed his eyes and took a deep, cleansing breath. It was doubtful, and so not a complication that would be appreciated right now in his life. 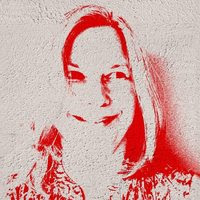