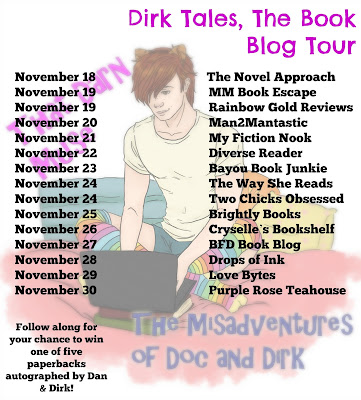 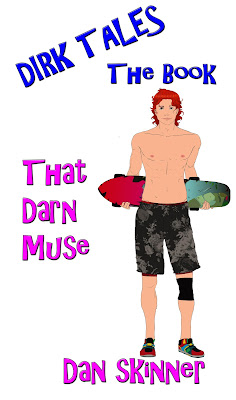 Dirk Tales, The Book includes previously released Misadventures of Doc & Dirk volumes, available now for the first time in paperback, an additional episode, and more!
He's a middle-aged, newly single, gay photographer starting life over. Along comes a freshly out nineteen-year-old, irreverent free spirit who wants to be his apprentice. Mismatched by more than a generation, what could possibly go wrong? Everything! And it's AWESOME!
Dirk's First Time: Every gay boy has his first experience. Usually it's a memorable, exciting personal time of discovery and intimacy between two young people. But two comic book characters? Is it horseplay or Cosplay?
The Boy At The Gym: First impressions can be deceiving. Sometimes that boy in the baggy clothes, talking to himself in the gym isn't as shy as he appears. Sometimes there's a deviant imp lurking beneath that freckled mask of innocence. Beware the Trojan Nerd!
A "Muse" ing: Most authors struggle with the voices or "muses" in their head when writing. Tuning that voice out becomes a little more challenging when your muse is a real-life nineteen-year-old who inhales espresso and turns out ideas at light speed. Danger Will Robinson!
Daddy and The Rent Boy: In sales, advertising is half the battle. That can become hazardous when you're in the company of an irreverent walking billboard.
Sex Dolls and Bad Dates: We’ve all had one of those dates where we think we've bitten off more than we can chew. The trick to know is Bite or Flight?
Dirk's Quirks: Everyone has idiosyncrasies; that's what makes us interesting. If you're lucky, you get a heaping helping and can share them with everyone.
Make it Naked: Teaching a nineteen-year-old walking hormone photography apprentice to shoot nudes is more than an adventure... It's a human obstacle course.

I’m a single gay man living in the Midwest. I write because I consider myself to be an old-fashioned storyteller. I’ve been a photographer for half my life, specializing in male romance cover art. My dream is to one day live on the beach with my dog and continue to tell tales that inspire and entertain.