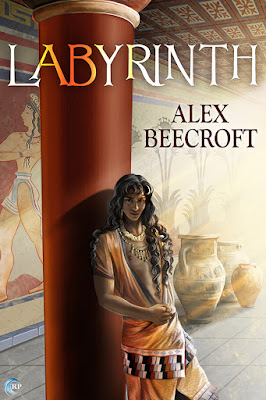 
Kikeru, the child of a priestess at the sacred temple of Knossos in ancient Crete, believes that the goddesses are laughing at him. They expect him to choose whether he is a man or a woman, when he’s both. They expect him to choose whether to be a husband to a wife, or a celibate priestess in the temple, when all he wants to do is invent things and be with the person he loves.

Unfortunately, that person is Rusa, the handsome ship owner who is most decidedly a man and therefore off-limits no matter what he chooses. And did he mention that the goddesses also expect him to avert war with the Greeks?

The Greeks have an army. Kikeru has his mother, Maja, who is pressuring him to give her grandchildren; Jadikira, Rusa’s pregnant daughter; and superstitious Rusa, who is terrified of what the goddesses will think of him being in love with one of their chosen ones.

It’s a tall order to save Crete from conquest, win his love, and keep both halves of himself. Luckily, at least the daemons are on his side.

Beecroft won Linden Bay Romance’s (now Samhain Publishing) Starlight Writing Competition in 2007 with her first novel, Captain’s Surrender, making it her first published book. On the subject of writing gay romance, Beecroft has appeared in the Charleston City Paper, LA Weekly, the New Haven Advocate, the Baltimore City Paper, and The Other Paper. She is a member of the Romantic Novelists' Association of the UK and an occasional reviewer for the blog Speak Its Name, which highlights historical gay fiction.
Alex was born in Northern Ireland during the Troubles and grew up in the wild countryside of the English Peak District. She lives with her husband and two children in a little village near Cambridge and tries to avoid being mistaken for a tourist.

To celebrate the release of Labyrinth, one lucky winner will receive their choice of an eBook off Alex’s backlist! Leave a comment with your contact info to enter the contest. Entries close at midnight, Eastern time, on November 26, 2016. Contest is NOT restricted to U.S. entries. Thanks for following the tour, and don’t forget to leave your contact info!