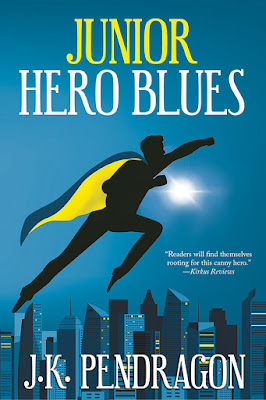 Last year, Javier Medina was your average socially awkward gay high schooler with a chip on his shoulder. This year, he's . . . well, pretty much the same, but with bonus superpowers, a costume with an ab window to show off his new goods, and a secret identity as the high-flying, wise-cracking superhero Blue Spark.

But being a Junior Hero means that Javier gets all the responsibility and none of the cool gadgets. It's hard enough working for the Legion of Liberty and fighting against the evil Organization, all while trying to keep on top of schoolwork and suspicious parents. Add in a hunky boyfriend who's way out of Javier's league, and an even hunkier villain who keeps appearing every time said boyfriend mysteriously disappears, and Blue Spark is in for one big dollop of teenage angst. All while engaging in some epic superhero action and, oh yeah, an all-out battle to protect Liberty City from the forces of evil.

Welcome to the 100% true and totally unbiased account of life as a teenage superhero.


J.K. Pendragon is a Canadian author with a love of all things romantic and fantastical. They first came to the queer-fiction community through m/m romance, but soon began to branch off into writing other queer fiction. As a bisexual and genderqueer person, J.K. is dedicated to producing diverse, entertaining fiction that showcases characters across the rainbow spectrum, and provides queer characters with the happy endings they are so often denied.

After writing in the romance community for several years, Junior Hero Blues is J.K.'s first book for young adults. Having been very positively affected by the queer books they came across as a teen, J.K. hopes their young adult books can have a similar effect on teens who may have a harder time finding books about people like themselves.

Notable works by J.K. Pendragon include Ink & Flowers, a contemporary romance novel with coming out themes, and To Summon Nightmares, a horror-fantasy that follows the journey of a young trans man into a world of magic and danger. To Summon Nightmares is the winner of the 2015 Rainbow Awards' Best Transgender Fiction award. J.K. also contributed to Less Than Three Press's Geek Out: A Collection of Trans and Genderqueer Romance.

J.K. currently resides in British Columbia, Canada, with a boyfriend, a cat, and a large collection of artisanal teas that they really need to get around to drinking. They are always happy to chat, and can be reached at jes.k.pendragon@gmail.com and on twitter @JKPendragon.

To celebrate the release of Junior Hero Blues, three lucky winners will receive $15 in Amazon Credit! Leave a comment with your contact info to enter the contest. Entries close at midnight, Eastern time, on November 12, 2016. Contest is NOT restricted to U.S. entries. Thanks for following the tour, and don’t forget to leave your contact info!
Posted by Diverse Reader at 11:11 AM