Blog Tour: Stay With Me by Lily Adile Lamb #Excerpt 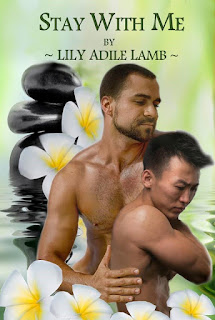 BLURB: It has been weeks since Curtis first saw the young waiter with the haunted eyes. No matter how often he went to the café to find the right opportunity to introduce himself, that moment simply did not come that quickly. Joseph was aware of the gentle giant who quietly came to have his lunch and then left day after day. Fearing his father’s wrath and under his ever watchful eyes, he made no moves nor overtures. Until one day when the other man approaches to him… Hope can turn to love... interracial love

It was a cold and rainy afternoon; an indication the summer had ended long ago. He tried to look casual on the way to the food hall to find Joseph. The lights of the shop weren’t turned on yet, but the kitchen light at the back was. On Saturday, some of the cafés weren’t open, and it appeared the Asian café was one of them. Curtis sighed and checked his watch. It was one in the afternoon, and he felt unsure about coming a day early. What if the old man was in the kitchen instead of Joseph?
He walked to the window and saw Joseph cleaning the floors. Curtis checked to see if the old man was somewhere nearby. Once he knew Joseph was alone, he tapped on the window, hoping his appearance would be welcomed.
Joseph looked startled and dropped the mop, clutching his chest. Curtis felt bad for scaring him. He waved, hoping to appear friendly and ease his fright. But Joseph stood frozen by the sink, which made Curtis feel uncomfortable, thinking maybe he had misread the signs. He sighed. To save face, he nodded at him and started to walk away, but Joseph smiled and came to the door.
Seeing the delight on Joseph’s face reassured him that he was welcome. Elated, he returned the smile. When Joseph waved at him, he felt cheeky enough to waggle his eyebrows. The other man giggled as he opened to door to invite him in. That was the first time he had seen Joseph look genuinely pleased and happy, which made Curtis feel warm and happy.
“Hello, there,” he drawled.
“Oh,” Joseph stammered. “I wasn’t expecting you until tomorrow. Come in.”
Curtis nodded. “I’m sorry about that. I was passing by and thought I’d see if you’re free to chat today. You’re obviously busy, so I’ll come back tomorrow.”
Joseph shook his head. “Follow me into the kitchen, and we can chat while the kettle boils. I’m almost finished, anyway.”
Curtis grinned. “Sure. I’m curious to see inside the kitchen that prepares my lunch every day.”
Joseph smiled shyly.
Curtis felt a bit embarrassed about the corny answer he’d given. For fuck’s sake! Is this all I can think of to say to the guy? What's wrong with me?
As they walked into the kitchen, he introduced himself. “I’m Curtis, by the way.”
The man turned back to Curtis. “I - I’m Joseph.”
“I know,” Curtis said gently.
Joseph smiled, looking pleased, and color tinged his cheeks.
“Finally we know each other’s names, hey?” Curtis responded, and they laughed. He found it endearing, the way Joseph nervously rubbed his hands against his trousers. He looked around.
The kitchen was small but clean. He nodded to Joseph’s invitation to sit at the small, Asian-styled table with two chairs. His height and weight made him feel awkward, wondering whether the delicate-looking chairs would support him. Curtis sat gingerly, praying he didn’t break it. When he looked up, Joseph smiled at him, and then turned to the sink to fill an old-fashioned, well-used giant kettle with water.
“Can I help you with anything?” Curtis asked.
Joseph shook his head. “No, you sit. I don’t have much to do, anyway. I only come here for stocktaking, some shopping, and cleaning on weekends.”
Curtis waited quietly until Joseph made their coffee and sat across from him.
As they sipped their coffee, Curtis looked at Joseph—his eyes were brighter. They smiled at each other, and Curtis thought how cute and sexy he looked.
“Look. I’m really sorry if I got you into trouble yesterday. I don't know why, but the old man doesn't like me for some reason.”
Joseph shook his head. “No, you didn’t cause any trouble. My father gets irritable sometimes, but he didn’t mean to be hostile toward you. Please take no notice of him. It’s me he has trouble with.”
“Ahh, I was right to think he was your dad. Partly because you resemble him, and he also kept giving me dirty looks.” When Joseph lost the sparkle in his eyes, he stopped talking and sipped his coffee. Before he lost his nerve, he asked, “Would you like to go out for lunch with me when you’ve finished work here?”
Joseph stared at him, looking stunned, gripping his mug tightly. His knuckles turned white as he nodded. “I can finish in about twenty minutes. Will you be okay waiting?”
Curtis winked and replied with a cheeky grin. “I can even help you, so we can get out of here faster.”
Joseph giggled. “No. You have your coffee. I’m almost finished here anyway.” 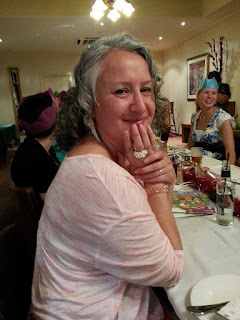 Lily Adile works as a nurse by day and writes GLBT Romance by night. Lily's focus in her GLBT stories are mere mortals because she believes that love is universal. Her mortal heroes and heroines are not rich, famous or incredibly handsome males with six pack bodies or stunning women... rather they are just everyday people who work hard and deal with whatever that life throws at them.

Lily believes that an individual's gender identity and expression is influenced by many factors including but not limited to culture, religion, social restrictions, custom and beliefs...this makes one's gender very diverse and fluid.

Lily is actively involved with Marriage Equality and stands by the same sex couples who want to have children.

Lily especially thanks her husband with all her heart for his endless patience, love and support. He is the love of her life and apple of her eye....he is the home she goes to at the end of a hard day at work.

Lily Adile was born in Ankara, Turkey and then worked in other countries. She visits her family in Turkey regularly and travels to Singapore to visit the other family members.