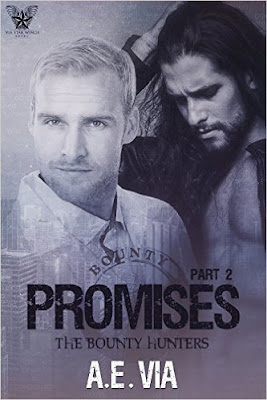 Roman “Quick” Webb is one badass bounty hunter on the crime­filled streets of Atlanta. He’s

business partner, Duke. However, there is one thing that has begun to cause Quick concern and it’s

the dreadful thought of living out the rest of his life alone. Seeing his best friend and his son fall in

love and sharing the special connection that only true soulmates can, has made him all the more

aware of what’s lacking in his life.

Dr. Cayson Chauncey has been wildly attracted to the big, tattooed hunter for almost a year, ever

Quick’s gratitude for something more, because the one time he tried to make his desires known, he

Cayson never dated a man who was willing to come out of hiding and be with him. Now at almost

forty, Cayson is intent on no longer being anyone’s dirty secret. Having experienced countless

disappointments, and having taken a stand not to fall for any more tricks, Cayson is more than a little

skeptical when Quick comes around asking for a second chance to prove himself. The gorgeous

man had already made it clear he was definitely uninterested in Cayson... or so he’d thought.

Dr. Chauncey stirred up Quick’s suppressed, most carnal desires from a place deep down inside of

him. He’d reacted so badly the first time that now his sexy surgeon wanted nothing to do with him. It

With a scorned ex and a very dangerous job thrown into the mix, Cayson’s happiness and all of

Quick’s promises may not be as easy to keep as they’d hoped.

PARTS ONE AND TWO IN THIS SERIES CAN BOTH BE READ AS STANDALONES. THERE ARE

NO CLIFFHANGERS IN EITHER BOOKS. 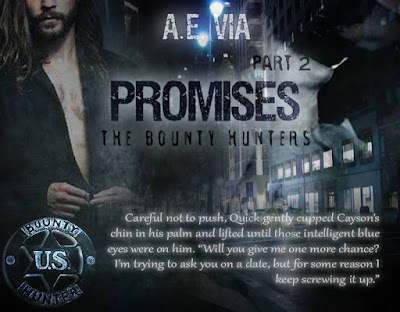 I was super excited to get my hands on this book. Part 2 of Promises by AE Via delivered!!!! We get to see Quick/ Roman and Cayson get their groove on. When 1 ended I was very much, “WHAT! You can’t stop there we need the 411 on those boys.” Clearly, AE heard me lol.
This is a fast paced story. One filled with sweet moments and suspenseful situations. There’s that alpha element that AE Via does so well. She is one of my favorite writers for the Alpha stories.
Just from the first page of this story I wanted to wrap Cayson up and take care of him. He hasn’t had luck when it came to love and it’s paid its toll on his self-esteem. Roman has his work cut out for him in that department. But as good as Roman is for Cayson, the same is said for the other way around.
This story was exciting, entertaining, and a lot of fun!

writing embodies everything from spicy to scandalous. Her stories often include

When she’s not clicking away at her laptop, she devotes herself to her

family—a husband and four children, her two pets, a Maltese dog and her white

While this is only her eighth novel, she has plenty more to come. So stalk her

– she loves that - because the male on male action is just heating up!

work, free reads, and where she’ll appear next. 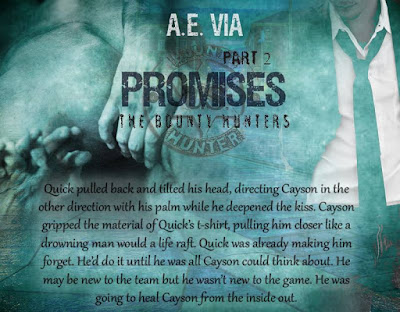 Want to win a copy of Promises 2 by A. E. Via?
Enter below!
Contest will end on March 28th
Winner will be emailed so please check your spam.
You'll have 48 hours to respond to the email. If we don't hear from you in that time
we will select a new winner.