Book of the Week: Simple Things by Kade Boehme #Review 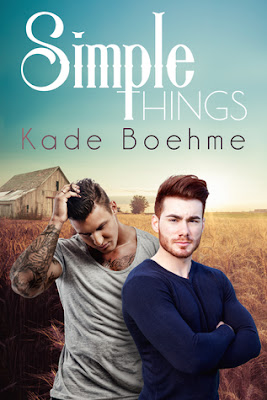 Carter Darling’s life has been a whirlwind since his mother was elected to senate when he was a teen. From private school to joining the military, he tried to make his own path while making as few ripples as possible. But an injury forced him to figure out new goals for his life. After his parents are involved a sex scandal, he decides to go back home to Tennessee to get some distance and out of the madness.

He didn’t figure on Jeremy Beck returning at the same time.

Jeremy’s finally past the rich boy angst that made for some dramatic teenage years, but he hasn’t earned back much respect from his parents playing in an indie band. Now, his band’s on hiatus and Jeremy’s looking for space from his unhealthy non-relationship with a band-mate so returning home to figure out his next step seemed like the way to go.

Their initial reunion is awkward, Carter still hurt by their last meeting and Jeremy trying to convince himself Carter’s still just his sister’s closeted little friend. But when they open up to one another again and decide a staycation fling will be a nice distraction, they may get more than they bargain for.

For two guys who’ve had so much drama in their lives, it’s surprising to find that sometimes love is found in the simple things, simple times. Who knew?

I truly love this story. It was romantic, witty, and hot. Kade has written a story that will lift you up. This friends to lovers story burrowed its way into my heart. Carter and Jeremy’s story is poetic. There’s a few scenes in this book where I had to stop reading, set my Kindle down, and breathe the moment in. They were that good. I won’t give anything away but there’s a declaration of love scene in this book that I read three times in a row before continuing because it was what every “I love you for the first time” should be. Just breathtaking.
I don’t usually re read books, rarely if ever. But Simple Things will be the exception to that rule. This is a book you read when you need to remember that love is there, time and distance don’t always mean an end to that love.
Outstanding story from a very talented author. 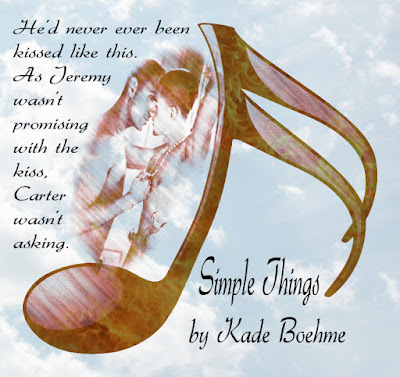 Posted by Diverse Reader at 5:04 PM