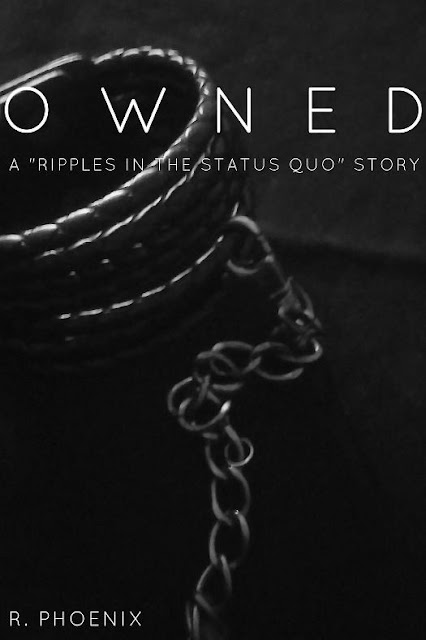 Elias Ivers was promised a slave recently captured from the Rebellion, and it would have only been a matter of time before the witch broke a mere human to be his pet as a beautiful match to his already enslaved werewolf. However, when Malkhaz takes what should have rightfully been his, he's determined to make the vampire pay; no one denies Elias what he wants--especially not someone who’s little more than dirt beneath his expensive shoes. Malkhaz had never imagined one hasty decision would both change his life and put him in over his head.

When the werewolf named his price, Khaz could only stare.
Before the Takeover, he wouldn’t have batted an eye. He’d had rich men falling all over themselves to take him as their boytoy, and he’d played each and every one of them for the fools they had been. But when everything had changed, that game had been ruined right along with his only source of income. These days, the figure Mays had mentioned wasn’t anything he could hope to pay by scrounging up the loose change from his couch cushions.
He hated himself for what he was going to suggest instead.
Sex is the answer to everything, isn’t it, Malkhaz? The taunting voice in the back of his mind sharpened, feeling like a blade as it drove into him. He ignored it; he couldn’t take the time to panic or think about how much it sounded like his sire’s had—melodious and rich, confident and in control.
A coy smile curved onto his lips, and Khaz sidled closer to Mays. He knew the werewolf wanted him. He’d wanted him since the first time they’d met, but the slaver wasn’t the type to pay for sex when he could go downstairs and fuck a slave instead for free. Khaz sure as hell hadn’t wanted to offer himself to yet another sadomasochistic werewolf; he’d screwed enough of them to know their brand of kinky didn’t mesh well with his.
Things changed. He had to set aside his pride and do this unless he wanted to lose Noah and feel another bond ripping itself away from him, leaving behind a soul-searing pain and a gaping hole where his heart should have been.
“Can’t we work something else out?” Khaz purred, tilting his head up at the werewolf and walking his fingers up Mays’ chest.
Mays hesitated, but Khaz already knew he’d won. He fought to keep the triumph at bay, because even if the battle had been won, it didn’t mean he’d win the war. The ‘wolf’s lips parted as though he intended to speak, but the vampire silenced anything he might have said with his own mouth. Pressing his body against Mays’, he was glad the slaver couldn’t see his disgust as he gave himself up as payment for goods.
Mays’ hands gripped his ass, fingers harshly digging into his skin as he yanked Khaz closer to him. “You can have me however you want me,” Khaz whispered against Mays’ lips, tongue teasing lightly at the seam between them. It wasn’t like he’d never faked it before, and if he’d ever had any shame, he’d long since written it off as the cost of doing business. “Let me work off the debt,” he urged as he heard the way the werewolf’s heartbeat quickened and his breath caught, hips slowly rolling in a hint of what he could offer.
“Not by breaking any more slaves,” Mays muttered, and Khaz forced himself to laugh despite the ever-growing urge to rip the slaver’s head off.
“It’s not my fault you offered me something so tempting,” Khaz replied flippantly. He felt himself wobble at the edge of a breakdown, and he knew he couldn’t handle this conversation for much longer. This time when he kissed Mays, his tongue drove past the other man’s lips. Mays rewarded the demanding kiss with a growl as he shoved—hard.
Khaz stumbled, his usual grace failing him as the force of that shove overwhelmed his dexterity, and the slaver let himself into Khaz’s apartment. Mays slammed the door behind him, and he pushed Khaz hard against the wall. “You can start paying your debt now,” he hissed. “On your knees, whore.”
Fighting back a hysterical laugh, Khaz obeyed, sinking to his knees before the ‘wolf. What a fucking brute. He had one of the most skilled courtesans of their time at his disposal, and all he wanted was a blowjob? He could get a quick suck from any of the slaves in his little shop of horrors downstairs, and here he was, wasting a talent that had once been renowned and precious.
Once upon a time.
CHECK OUT BOOK TRAILER HERE!

Ripples in the Status Quo Works:

Ripples in the Status Quo is a dark series featuring stories within a world where supernatural beings seized control from humans and relegated them to the bottom of the food chain. Used for food, entertainment, and worse, nothing protects them from the hands of those who claim them as slaves.

But there are some who don't adhere to the status quo the world at large has accepted...

The RISQ world has little place for humanity--and the author's idea of romance may not match yours. As such, there are no guarantees of happily ever afters, and content may be offensive to some readers.

More information about the books can be found on my site at http://rphoenix.theupsideis.com/index.php/books/.

The suggested reading order for Recoil, Ravel, and Bought is below, though these three works can be read in any order. Owned picks up approximately three weeks after Bought and immediately following Recoil...

After years of wasting her B.A. in English and being the adult no one wanted talking to their children about the usefulness of college degrees, R. Phoenix decided it was time to dust off the old nag. She settled down and started writing books in the Ripples in the Status Quo universe, a dark world of her own devising where supernatural beings have risen up and taken over the world - and relegated humans to the very bottom of the food chain. These stories are the paranormal romance chronicles surrounding the vampires, werewolves, witches, and humans whose experiences are outside the norm. Her search history is for research purposes, not nefarious schemes. (Really.)

When she's not writing, learning new synonyms for naughty words, or knee-deep in sexy gifs (to make sure scenes are anatomically possible, of course), she's apparently preparing for the apocalypse. She's attempting to learn how to cook without setting fire to the kitchen, garden without drowning the plants, and tend to what she suspects will be a horde of ducks. Her son, husband, and cats occasionally let her take naps. Uninterrupted. She's spoiled rotten that way.

R. Phoenix will be gifting one person a reader's choice
from this series!
Keep in mind BOUGHT is free right now
and Recoil is 99 cents so you might
just want to get those now:
Get them here
Now this contest will end on March 17th.
Winner will be contacted via email so check your spam!

a Rafflecopter giveaway
Posted by Diverse Reader at 3:43 PM