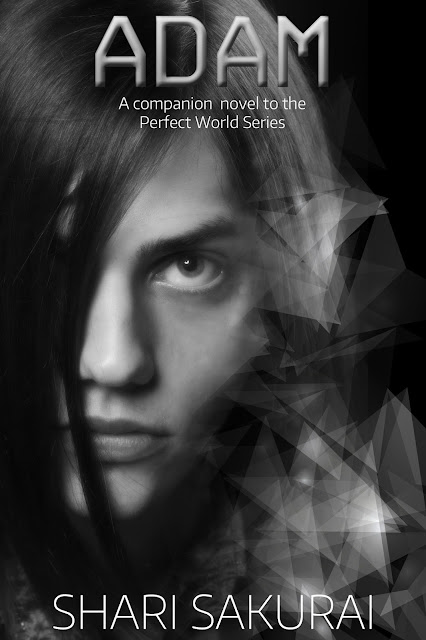 Adam Larimore is on a mission of self-destruct. After learning that he was genetically engineered for the sole purpose of inheriting his father’s empire, Adam has been determined to ruin his father’s life and in the process his own. When Ivan Williams, the man soon to become the Head of the London Security Agency (L.S.A), approaches Adam with the offer of a business partnership, Adam discovers the appalling truth behind the technological and genetic advancements that have come to shape England. His relationship with his father is at breaking point and when events take a devastating turn, Adam finds himself pushed further than perhaps he wanted to go.

“Nice ride!” Leon commented as Adam pulled up beside him. It had been easy to hack into the computer and override the system for a manual drive. Even though Adam had not driven a car before he’d soon got the hang of it. Driving round the city wasn’t easy though as the streets had been rebuilt with mainly tram and pedestrian use in mind. A separate lane that was specifically for vehicles ran alongside the tram lanes in the main streets, however, this was rarely used as cars were not as commonplace as they had been in the last century.
He took a swig from the bottle of vodka that he’d bought from home and then offered it to Leon as he climbed into the car.
Leon grinned as he took a longer drink before setting the bottle down on the floor at his feet. He then leaned over to kiss Adam. “Shall we go back to my apartment?” he suggested as he ran a hand down Adam’s bare left arm.
“Later,” Adam replied as he drew back. “I want to go for a drive first.”
“Sounds good to me,” Leon answered with another grin.
Adam pressed the button on the touch screen that put the car into drive and pulled it away from the side of the street. He selected eighty miles per hour on the speed controls and deselected the auto-slow for turning corners. The streets were deserted and appeared to flash by.
“How fast can it go?” Leon asked as he took another drink from the bottle of vodka.
Adam shrugged and checked the console. “Hundred and twenty miles per hour,” he replied.
“This is fucking awesome! Where did you get it?”
“It’s my stepbrother’s.”
“Does he mind you borrowing it?”
“I didn’t ask! Would you like to drive for a bit?”
“Sure!”
Adam pulled over long enough for them to change seats. “The computer sets the speed and changes the gears automatically. All you have to do is steer and brake.”
“How much does one of these set you back?” Leon asked.
Adam shrugged. “This is state-of-the-art so I’d say almost half a million.”
“Fuck! Your stepbrother will be pissed then!”
“Do you think I care about that?” Adam drank the rest of the vodka and tossed the bottle out of the open window. He leaned back in the seat and shut his eyes as he felt the coolness of the evening breeze on his skin. He almost regretted looking at those files now. There were some things that, Adam reasoned, you were better off not knowing.
He was jolted out of his thoughts when Leon stopped the car. Adam opened his eyes, although he barely had time to focus on his surroundings when Leon leaned across the gap that separated them. He kissed Adam tentatively at first as they were in public. Adam was mildly concerned that someone might see them, but he forced this to the back of his mind as he returned the kiss just as keenly as he did when they were alone. As Leon’s hand slid under his tank top Adam reached over into the gap between the two seats and pressed the button that caused the passenger seat to recline backwards.
“Whoa!” Leon wasn’t expecting this. He lost his balance and fell on top of Adam. Adam sniggered as Leon pushed himself back up. “Here then?” he questioned with some amusement.
“Yeah,” Adam nodded, not breaking Leon’s gaze.
The blond shrugged off any apprehension he might have been feeling and was about to lean down to kiss Adam again when he froze.
“What is it?” Adam asked worriedly.
“There’s a guy approaching the car.”

Adam pushed himself up and glanced in the rear view mirror. “It’s the police. Swap seats with me.”
“Adam—”
“It’s fine. Better they catch me behind the wheel than you!”
Leon could see the sense in that and they were able to make the switch and return the passenger seat to its normal position before the officer arrived at the driver’s window.
“Hello again, Joel,” Adam said with a grin as he recognised the policeman.
“Mr Larimore,” Officer Joel Banks stated curtly. “Do you have a licence for this vehicle?”
“No,” Adam replied calmly. Banks would have checked before approaching them anyway so there was little point in lying.
“Then I’m going to have to ask you to get out of the car. Both of you,” Banks frowned as he glanced at Leon. “Who was driving?”
“I was,” Adam answered without hesitation.
Banks clearly didn’t believe him. “Do you want to think about that? I can smell the alcohol on your breath, Mr Larimore. You may well be over the legal limit for operating this vehicle.”
“I probably am,” Adam admitted with a sigh. He got out and shut the door after him. Leon had also climbed out of the car although he didn’t appear as comfortable with the situation as he came round to join Adam.
“Turn around and place your hands on the side of car. Both of you,” Banks ordered. “Do not move. I am armed and I will shoot you if you try to make a run for it.”
Even though they both complied Adam contemplated whether he could be quick enough to get back in the car before Banks could get a round off. He might be able to but there was no guarantee that Banks wouldn’t shoot Leon instead. Adam wasn’t really that concerned with escaping anyway.
“I don’t know why you are bothering with all this?” Adam said as Banks started pressing various buttons on the portable breathalyser. “I’ll be out by morning!”
“Maybe but your friend won’t be. I know he was driving, Mr Larimore.”
“Good luck proving it,” Adam goaded him. Banks moved further away as he began speaking into his radio. All officers carried portable breathalysers as all offenders were tested as part of standard procedure before being taken to the police station.
“Adam, cool it,” Leon murmured.
“It’s fine. He’ll take us back to the station and we’ll get slaps on the wrist,” Adam answered confidently.
“Adam,” Leon cast a wary glance at Banks before speaking again. “I have Clarity on me.”
Drug offences were taken very seriously and as standard procedure Banks would search both of them before taking them back to the station.
“Okay,” Adam thought quickly. “When he comes back I’m going to jump him. Get out of here and make sure you dump the drugs in case you’re picked up later.”
“What if he shoots you?”

“What if he does? I can heal from anything other than a heart or head shot. He won’t shoot to kill. He’s not that stupid.”
“Thanks baby. I owe you one.”
They fell silent as Banks re-joined them.
“Stay exactly where you are,” he warned Leon before instructing Adam to blow into the top of the breathalyser. The small LCD screen on the side immediately bleeped to confirm what they both already suspected.

“You’re well over the limit,” Banks said with some satisfaction in his voice. “Adam Victor James Larimore, on behalf of the Government police I am arresting you for breach of section 5, paragraphs 2.5 and 3.9 of the vehicle licensing and operations guidelines. Anything that you say from this point onwards could be used as evidence against you. Do you understand?”
Adam shrugged and, taking the man by surprise, he whirled around and punched him hard enough to cause him to drop the breathalyser onto the concrete. Adam didn’t need to look behind to him to know that Leon had made a run for it. Banks’ angry shout confirmed that. The officer immediately drew his gun as he scrambled to his feet.
“Get down on the ground!” he shouted as he raised the weapon. Adam didn’t hesitate. He lunged forwards and slammed his elbow into Banks’ gut. The older man cried out in pain and stumbled backwards. Adam grabbed hold of the gun barrel and attempted to force Banks to release his grip on the weapon. Banks swore angrily as the gun was pulled down. A shot rang out and seconds later Adam felt an excruciating pain in his right thigh. Despite being cavalier about the prospect of being shot the reality hurt much more than he was expecting. He cried out and dropped to the ground. He pressed his hand tightly over the wound to try and staunch the blood flow. Crimson welled up around his fingers and Adam suddenly felt light-headed. Banks took a step back as his furious expression faded into one of almost horror. He was breathing hard as he began talking into his radio.
Adam glanced down at his blood soaked leg and the rapidly growing pool underneath him. There was too much blood…he’d hit the artery Adam thought dizzily as his vision began to fade. He was vaguely aware of Banks’ worried yell before everything went black. 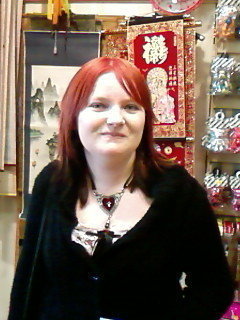 Shari Sakurai was born in Chichester, West Sussex, United Kingdom. After completing secondary school she moved away from further education to work in administration.

Shari is very interested in other countries’ cultures and mythology; in particular Japan. Japanese themes and influences can often be found in her work.

Shari's debut novel Demon's Blood was released in ebook format on 25th January 2014. She has participated and won the National Novel Writing Month challenge for the past eight years.

Shari will gift one person a copy of Adam!
Simply enter the rafflecopter below.
Contest will run until March 19th
Winner will be contacted via email so please check your spam.


a Rafflecopter giveaway
Posted by Diverse Reader at 6:36 AM