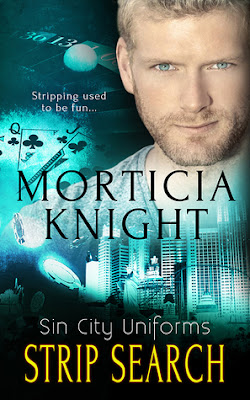 A sexy stripper attempts to escape his dangerously obsessed boss while searching for his missing younger brother.

Stripping used to be fun, lucrative and a place for Dakota to practice for his professional dancing career. But the owner of Glitter Boys wants Dakota for himself and will stop at nothing to possess him. When his thirteen-year-old brother runs away from home to escape their abusive father, Dakota is determined to find him before something awful happens to him on the streets.

Patrol officer Reed hasn’t been attracted to a man in a very long time, but when he’s called to an assault in progress at the LGBTQ teen shelter, a young man approaches him, begging for help in finding his missing brother. An instant spark occurs, but he pushes it away. When the same man is attacked outside a strip club later that night, he discovers the desire is mutual.

As the two men learn more about each other and become closer, the specter of his obsessed ex-boss remains. In addition to that, Dakota has to fight the system to gain guardianship of his brother and keep him out of foster care. Dakota doesn’t know if the hunky cop he’s fallen so hard for can handle a relationship with an ex-stripper struggling to raise a teenager. But, will Reed be able to give up dating women for good and dedicate himself to their new family?

Morticia’s Sin City Uniforms series is addicting. I loved the premise of Strip Search. Stripper with a bad boss, trying to save up for a dream, desperate for the safety of his brother… enter strong, gorgeous, stable Reed! Cop and a stripper! COME ON it’s a book made in heaven!

Many time with a series, with so many characters you think they all will take on the same personalities. This is book 7 and I’m amazed how Morticia has not fallen into that trap. Each character is unique and in Strip Search we meet more wonderful players.

As always Morticia has written a story with lust, love, fluff, and suspense. There’s a mixture to her work and she always balances things out perfectly. Nothing is ever saturated in one element and I always love that about her stories. This is a fabulous addition to this already wonderful series.


a Rafflecopter giveaway
Posted by Diverse Reader at 12:56 PM