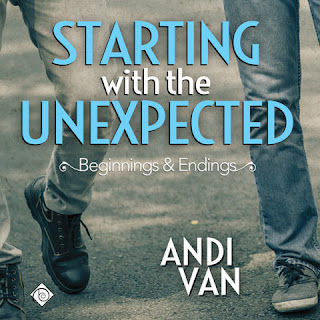 Review: Starting With the Unexpected (Audio)

Reviewed by: Erin
Read all of Erin’s book reviews on Goodreads


Blurb
Zachary Blaise is having a weird week—even by his standards. Though he's gay, the radio personality has been dumped via text by a girl named Marian—and he's never even met her. On top of that, he's developed a massive crush on Marcus, the new waiter at his favorite diner. His best friend thinks the whole thing is hilarious.
Marcus’s week hasn’t been his best either. He's been betrayed by those closest to him, and although he isn't the guilty party, Marcus is the one getting harassed.
Impossibly, things are about to get even weirder. Marian has secrets, and those secrets are going to make some serious ripples in Zach's life. When he discovers that the girl called Marian is actually the man named Marcus, Zach stumbles down a rabbit hole of abusive ex-boyfriends, psychotic relatives, and revelations from his own past. If he can survive the chaos, the journey might prove worth the effort.

Buy on DreamspinnerPress
Buy on Amazon

Starting with the Unexpected was one of my sleeper favorites of 2015. I LOVED the book. The characters, the writing, the plot … all of it from beginning to end was fabulous. Zac and Marcus are so great together, and how they meet has got to be one of my favorites of any book.

Here’s what I had to say on Goodreads back in May:

When I listened to the audio, I fell in love with Zac and Marcus all over again. Probably even more. Jonathan David did a great job with this story. The pacing was spot-on, the “voices” were even better and made the story really come to life. I laughed until I cried more than a few times, and boy are there ever so super swoony moments, too, and hearing Zac and Marcus together made them that much better. I listen to A LOT of audio books, I love them. Jonathan David is a really good narrator. He’s got a crisp, clear tone and he gives each character a distinct voice which is great. I really enjoyed Zac’s best friend, Jordan as well as Zac’s family.

I highly recommend this book, in whatever format you prefer. But if you’re a huge fan of audio books like me, or even if (especially if) you’re on the fence and wondering if you should give them a try … do it. And start with Starting with the Unexpected. You won’t be sorry.

a Rafflecopter giveaway
Posted by Diverse Reader at 3:32 PM