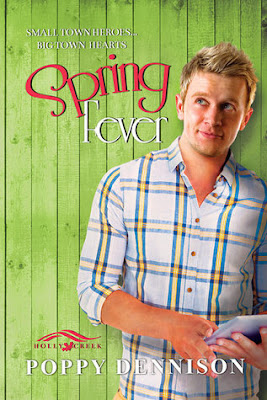 Jefferson Lee Davis, Holly Creek’s new Director of Publicity, is gearing up for the next big town event, the summer Rose Festival. The job is running smoothly, but the course of true love has hit a rocky patch. His hunky boyfriend, Sheriff Zane Yarbrough, is receiving mysterious phone calls he doesn’t want to discuss. While Jefferson Lee is blindsided by jealousy, the second shoe drops with the appearance of a handsome stranger in the small tight-knit community. Needing answers, Jefferson Lee enlists his best gal-pal Clover Crofton to help find out what secrets Zane is hiding. When they land themselves in more trouble than Jefferson Lee bargained for, he and Zane face the first big test of their relationship. Zane and Jefferson Lee must work through their trust issues if they’re going to make it as a couple, and Clover may just have a thing or two to learn herself.

Let me start by saying this first thing. I want to live in Holly Creek. I’d move there tomorrow if I could. No joke. I grew up in a small town, and Poppy Dennison captures that unmistakable small town vibe just about perfectly. That feeling of drinking sweet tea (well, I grew up in the north so it was lemonade not sweet tea) while sitting on the front porch waiting for the fireflies to come out. I grew up with community picnics, summers spent at the baseball field watching Little League, and running around with my friends and playing kick the can until it was too dark to see. Spring Fever (and Dogwood Days, book 1) encompasses all this nostalgia, and then some, while making it feel new and fresh.
I want these people to be my friends. I want Clover to drag me along on one of her zany larks. I want Jefferson Lee to be my BFF and ramble on about who knows what. I want Uncle Sherman to take me under his wing and walk with me around the neighborhood. These people are so richly developed, you can practically smell the roses from Mrs. Beulah’s garden or taste the cooking at Gracie’s diner.
I love the relationships Jefferson Lee has: with his Uncle Sherman, with his bestie Clover, and of course with Zane. These two haven’t been together very long by this point, but boy it sure is fun watching them fall more in love and learn new things about one another. Jefferson Lee with all his neuroses and genuine goodness and Zane with his sense of duty but his complete enjoyment of all the mess that is Jefferson Lee is pure enjoyment. Poppy’s writing is crisp and full of gorgeous imagery and witty banter.
Spring Fever was FUN! Delightful and effervescent and sweet with just enough sexy to make me swoon. If you haven’t started this series yet … DO IT NOW. I’m waiting with baited breath for the next one; I think there’s some good things coming to Holly Creek!