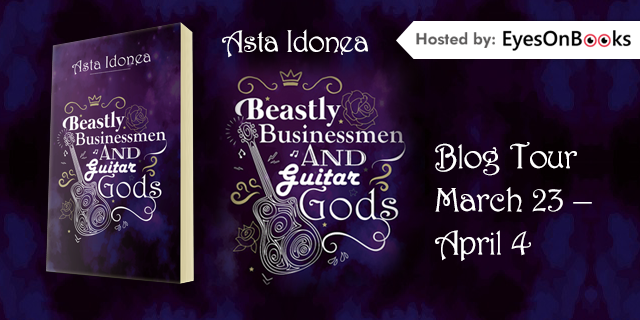 Fairytales and Myths for the Modern Gay
The modern age is devoid of magic.
Or is it?
How else could a stolen guitar or a lost shoe lead to love?
What but magic could spark romance at a workplace assessment?
Or turn a mean-spirited monster into a man?
Six fairytales and myths are given a contemporary MM twist in this collection of stories, proving that sometimes the mundane can be magical too.

DRAGGED INTO LOVE (Þrymskviða)
When Theo’s landlord steals a prized guitar in lieu of rent owed, he informs Theo he will return the instrument on one condition: he wants a date with Theo’s twin sister.

LOVE’S CODE (Ariadne and Theseus)
Andre must pass the examination if he wants to keep his job.
However, he is distracted by his unspoken love for fellow programmer, Eren.

GUESSING GAMES (Rumplestiltskin)
Sasha told a little white lie in his job interview and it won him the role.
Only now he is faced with a pile of work he doesn’t know how to complete.

ASSIGNATIONS AND ULTIMATUMS (The Strange Elopement of Tinirau)
Hunter and Ross are in love, but Ross’ father keeps trying to set him up with undesirable, yet powerful, older men, the latest of whom happens to be Ross’ boss.

LOST AND FOUND (Cinderella)
Cillian is dreading the work masquerade ball, but once there he finds himself romanced by a dashing stranger, only to flee when he discovers the man’s identity.

A DEBT IS A DEBT (Beauty and the Beast)
Dunstan Griffin is not a man to let a debt slide, so when debtor Alfred Siskin offers the EA services of his son, Wynn, in lieu of payment, Dunstan accepts.


EXCERPT—Dragged into Love
When Theo turned back to his sister, Fran was glowering. “Well, I’m not going and that’s that.”
“Fran, please. Pretty please. He’s gonna smash my guitar. The red Fender. You know how much that baby means to me. It’s my lucky charm, my most prized possession. To lose it would be like losing a limb or something. I’m down to play the opening set at Asgard on Saturday night. The best club on the guitar circuit, Fran. It’s taken me months to score a gig there. If I cancel they may never book me again. And how am I ever going to make ends meet like a responsible adult if I have to cancel all my performances? I don’t make anywhere near enough at the café to cover my half of the rent. I need that extra cash, Fran.”
“It’s not my problem.”
“Actually, I have a suggestion.”
Theo turned to look at Hayden. Fran’s boyfriend, partner, or whatever the hell he was, had kept stumm throughout the conversation, hovering over near the kitchen counter, and Theo had all but forgotten he was present.
Hayden was one of those people it was easy to forget. More silent watcher than active participant, he rather blended in with the furniture after a while. That was probably why Fran liked him—he would kowtow to her wishes without a fight. Theo had nothing against him. Hayden was simply so nondescript Theo hadn’t bothered to form much of an opinion on him one way or the other.
“Oh yeah?” Theo asked, cocking his head. “What’s your solution then, oh wise one?”
“Well, I.... That is to say.... I merely thought that....”
“Just spit it out, Hayden.” Theo raised the can of beer to his lips, taking a sip. Whatever the plan was, Hayden seemed to be damned uneasy about divulging it, though Theo could hardly see why. It wasn’t as if a straight-lace like Hayden was going to suggest anything dubious or illegal. The guy would shudder at the mere mention of lawbreaking.
“You could go instead.”

NICKI J. MARKUS was born in England in 1982, but now lives in Adelaide, South Australia with her husband. She has loved both reading and writing from a young age and is also a keen linguist, having studied several foreign languages.
Nicki launched her writing career in 2011. She published works through Wicked Nights Publishing and Silver Publishing before both companies closed their doors. She is now self-publishing some of her works, including the novella Time Keepers and the fantasy novel The Ragnarök Chronicles.
Nicki also writes M/M fiction under the alternate pen name of ASTA IDONEA and has had several short stories published by Wayward Ink Publishing. She is currently working on her first M/M novella.
Nicki works as a freelance editor and proofreader, and in her spare time she enjoys: music, theatre, cinema, photography, sketching, and cross stitch. She also loves history, folklore and mythology, pen-palling, and travel.
Social links:
Website: http://www.nickijmarkus.com
Facebook: https://www.facebook.com/NickiJMarkus
Twitter: https://twitter.com/NickiJMarkus
Posted by Diverse Reader at 6:10 AM