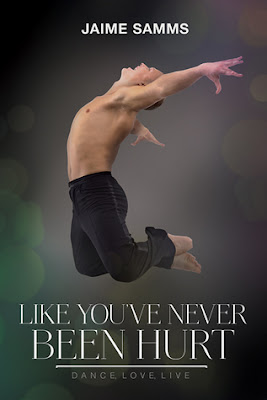 Reviewed by: Erin
Read all of Erin's reviews here

About to lose the only thing he ever loved, Adam Pittaluga is at a crossroads in a dancing career that has hardly begun. He has always wanted to be a ballet dancer, but now that it’s impossible, he turns to Peridot for comfort. Peridot has been rebuilding his life after losing his ability to dance professionally, his marriage, and very nearly his daughter. He has a lot of reasons to be leery of starting something new, especially with a man as young as Adam.

Adam and Peridot have to believe that starting again can lead to love and success and that sometimes, the strength needed to love like you’ve never been hurt can be borrowed from unexpected places for a while. But ultimately, they must find it inside themselves to be each other’s happy ending.

Jaime Samms has a way of writing broken, complicated men that is unlike any other author. Like You’ve Never Been Hurt Before is her newest novel, and it is chock full of broken men. Peridot Nascimbeni and Adam Pittaluga are broken in different ways, one emotionally and the other physically, and the sparks fly between the two from the moment they meet.
I don’t know a lot about dancing: ballet, modern, or otherwise, but boy do I have a clearer picture of the way a body can move after reading this book (and the first one of the series—Like No One is Watching—as well). The vivid descriptions Jaime Samms writes made me feel like I was in the ballet studio as Adam and Peridot teach class. Sight, sound, even the smell of sweat and ballet shoes, all are described in evocative detail, and when mixed with music and bodies in motion, well, the pictures she paints are crystal clear. The two men couldn’t be different, Adam is just starting his career while Peridot’s has crashed and burned spectacularly, leaving him hardened and wary, both of the difference in their ages as well as experience and back ground.

The emotional connection between the two men is palpable. It’s intense and consuming, and is every bit exciting as it is terrifying for both Peridot and Adam. I loved the way these two came together, how they both circled one another, hoping for a sign of attraction from the other, only to throw caution to the wind and give in to the feelings both are fighting. I really enjoyed watching Adam and Peridot advance then retreat, be bold then pull back, afraid to put their hearts on the line until it becomes clear they have no choice but to be together.

I liked the secondary characters. Cobalt was feisty and brash. Camille was bratty yet lovable. It was great to see Conrad, and Adam’s brother Matt was a fun surprise. Adam’s dad made my heart melt; such a tough guy struggling to understand his artistic son who is so different from him, but the love he feels for Adam shines through.
If you haven’t checked out this series, I highly recommend you do. Both books in the series are lovely, quiet, emotional reads that have just enough drama and steamy moments to keep you riveted from beginning to end.

a Rafflecopter giveaway
Posted by Diverse Reader at 1:40 PM