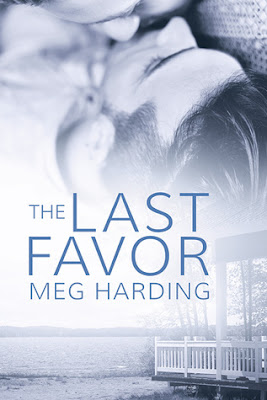 Reviewed by: Erin
Read all of Erin's reviews here

Three years ago Andrew Wilson and Flynn Barnett were in a relationship, until Flynn made a mistake that nearly cost Andrew his life. Andrew walked away from the FBI, his home, and his partner, and started over back in Montreal, running a restaurant.

Fast forward to the present and Andrew is knee-deep in preparations for his sister’s wedding. When an ex-colleague calls to ask for one last favor, the last person he expects to walk through his door is Flynn, in need of a place to stay. Only thing is, Andrew can’t say no.

Two weeks of wedding hijinks bring back all the old feelings that have simmered below the surface. Caught in a cycle of fighting and making up, the two men try to figure out if there’s anything they can salvage. And even if there is, Andrew can’t be sure this time will be any different.

The Last Favor by Meg Harding is a story about a second chance at romance. It’s a quick, easy read that is mixed with humor, a bit of action, a lot of snark, and some sweet moments. The books starts off with a bang, literally since Flynn and Andrew have a one-night stand, and things take off from there. Meg Harding’s writing took a bit to get used to, but once you get past the first few pages, you definitely fall into a rhythm.

I will say that once we see a bit of Flynn and Andrew in action—they’re FBI agents—partners at work and in life, it becomes pretty apparent that while they have some good qualities, they don’t seem much like any FBI agents I’ve ever come across. Flynn is more than a little unlikable at first and after a falling out between him and Andy that keeps them separated for more than three years, when he pops back up again (bizarrely in the middle of Andrew’s sister’s wedding preparations) he’s not much better. I found both characters rather childish and immature, Flynn more so than Andrew. I really felt like the secondary characters were way over the top ridiculous to the point where they were all annoying (except for Andrew’s father).

There are some sweet moments between Flynn and Andrew though as they try to mend their hurts and move forward. Neither man has stopped loving the other; and when Harding shows them being serious and acting like grown-ups, it’s rather heartwarming. I’m not a fan of forty year old’s spending almost an entire book not communicating and acting like they’re in junior high.

Just to be clear, there’s really nothing wrong with Meg Harding’s writing. There are some moments of witty banter, the story flows well, and if you don’t mind your characters acting a bit (or a lot in some instances) over the top, then this is definitely a book for you. This is a fun, quick and easy read though and if that’s what you’re looking for, The Last Favor will hit the spot.

Giveaway
Enter the monthly giveaway that ends April 30th
Winner will be contacted via email so please check your spam.
Thank you.


a Rafflecopter giveaway
Posted by Diverse Reader at 5:04 AM