A Piece of Me: Monthly Feature ~ A Piece of Karin by Karin Pike 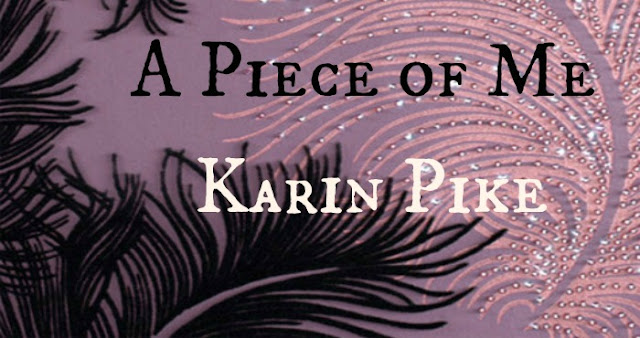 Diverse Reader's monthly feature A Piece of Me gives artistic people a place to share something about themselves. We've had some incredible people as our feature bloggers. This month I have a fellow blogger, author, and creative genius. It's a real pleasure to have Karin Pike here this month. I've known her for years and she's a remarkable person. So here she is sharing a piece of herselfe, with you.

A Piece of Karin

Hi folks! My name is Karin, though most people know me better under the name ‘naelany’, which is the name I write fan fiction under, as well as what I use on most social networks. Meredith did a guest post on my blog (here, in case you missed it) last month and asked if I wanted to give it a shot, so here I am!

*clears throat* Okay, so I’m supposed to stick to one topic. I promise to do my best ;-)

Like I said earlier, I write fan fiction. In fact, it is through that medium that Meredith and I met (how many years ago now? I forget. A while, let’s leave it at that). To put a finer point on it, we met through Twilight fan fiction (hush, I don’t want to hear it). When the movie came out (yes, I was lured by the movie before I ever read the books), it came at a time in my life where… well, I wasn’t doing so well. The books helped me through a time where I was, quite honestly, depressed and hurting. I won’t go into the why - those that know me well enough will already know, and the rest of you, well, it really isn’t any of your business.

As I mentioned, the movie lured me into the books, and it eventually led me to fan fiction, because I needed more. I needed to explore the characters. To see the things that were ‘wrong’ to me, fixed. And I needed the crutch (for lack of a better term) to help me crawl out of the depression. Luckily, I found it in the fandom. At first, through reading. Mostly Edward/Bella stories, but eventually branching out to other pairings, and my introduction to slash fiction.

And that is where I ended up really finding my niche, so to speak. I got bitten by a bunny that would not let up. I’d never written before in my life - well, not for fun. The only times I’d ever written anything was back in school for assignments, and each and every time I’d gotten shot down for my efforts and told by my teachers (and, of course, fellow students) that I could not write to save my life. In short, I sucked at it. Badly.

Myeah, as you can imagine, hearing that at a very young age does not tend to make for confidence in your abilities, so I never really took it anywhere. Until At the Deep End bit me, and bit me hard. The story wouldn’t let me go and eventually I caved and started writing. Go ahead, take a look. Here’s a short summary:

After an encounter at camp many years ago Jasper thought he would never see Edward again but little did he know who his new teammate would turn out to be…….

My very first foray into writing, and boy howdy, can you ever tell. Still, I’m refusing to change anything about it, because it’s my baby and it’s grown right along with me, as I’m sure you can tell once you start reading. At least, I hope you can ;-)

After At the Deep End, more stories followed. Most of them within the M/M genre, but also a few others. I stuck with Twilight for a long time. Yes, there’s a couple of unfinished stories still lingering that I fully intend to come back to, but it’s not something I’m currently able to do much about. Life has happened, fandom has happened (trust me, it’s all well and good, but as much as fandom has helped me through things and I’ve met some really great people through it, it can also be an ugly place). I’ve not given up, however.

I have expanded to other fandoms. In fact, Stargate Atlantis is what got me back into writing after a very long break, and I haven’t really stopped since. Well, I take a lot of breaks, but there’s always something brewing. I just choose to no longer share anything unless it is completely finished and ready to post. A lesson I learned the hard way, but I learned it.

Hmm… I’m not sure there’s really much more to tell, without getting into different topics, so I’ll leave it at this. If you want to read my stories, you can find them here on my blog, or on Archive of Our Own.

Thanks for having me, Meredith! It’s been fun :-)

Email ThisBlogThis!Share to TwitterShare to FacebookShare to Pinterest
Labels: A Piece of Me, Blogging, Karin Pike, Monthly feature