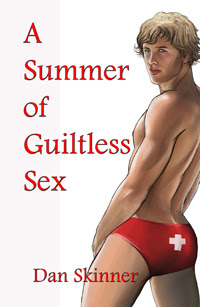 Two very different men, from two walks of life find common ground for an exciting and unique adventure. It'd not been a great beginning of the summer season for either Bill, a young bridal store clerk, or Ted, a college student working as a lifeguard at the apartment complex’s pool. They'd both been dumped in their respective relationships and were still looking for “the one.” Their chance meeting at this low ebb in their lives and an off-the-cuff remark about what they both needed as a temporary solution to their physical needs, lead to a unique and adventuresome pact between the two. They agree to be what's lacking in each other’s lives. They begin a journey of self-discovery. One that will only last the length of the summer and will forever change their lives and ideas about love and friendship. One season of guiltless sex.

This is not a friends to lovers story. It’s not even a love story. It’s about friendship and discovery. It’s a story about grabbing life by the horns. We often hear the saying, life is for the living. Well, that’s true and this story really brings that message home. Two men, Bill & Ted (yes you read that right) they meet and they like each other. Ted wants to be an actor, he wants that dream more than anything else in the world. Bill wants to design clothes. Both want to live their dream and it’s only when they enter each other’s lives do they embrace that. Like I said it’s a friendship through the entire story to the very end. This one summer, one season, they decide to have an adventure. And they really do.
I cried with Bill. I felt the losses in his life and I want to say I wasn’t sure I was thrilled with how it played out with Bill & Ted. But then I got it. I allowed myself to sit back and let it sink in. The reason and the purpose behind what these two men did. They both will grow through this book and if you allow it, you will grow with them and maybe you’ll appreciate life a little more and want an adventure too.

We were now looking directly at each other. I didn’t remember turning, or how we happened to end up in the eye lock, but there we were, inches apart, standing naked in a pool and talking about guiltless sex. The moment had its own compelling force, and I believed we both knew it.
“Do you want me to kiss you?” I asked.
“You’re the expert on it, I think it might work better that way,” he said. There was an unmistakable nervous quaver in his voice.
I could tell by the razor straightness of his shoulders that he’d gone tense. He was also staring at me, not blinking.
“You look like someone taking his first driving lesson,” I said. “Maybe you should relax a little.”
He grinned nervously. “I’m trying.” He rolled his shoulders, as if trying to loosen his muscles, and then fell right back into the same rigid posture.
I was actually not feeling that much less tense, but I had the advantage of having kissed guys before and knew it wasn’t a big deal. Slowly, I moved in closer.
“Close your eyes,” I instructed in a soft, reassuring tone.
“Okay.” He closed his eyes, still appearing as if he’d been cracked from a concrete mold.
Even as uncomfortable as he was, he was visually striking. I could imagine some artist sculpting that chiseled face, and sleek neck and shoulders as a fountain centerpiece. As I moved into his space, I could feel the heat from his body. I carefully cupped my hand and took his chin. I felt the sandpaper stubble of his whiskers beneath the wetness. I closed my own eyes and aimed for the glorious target and then pressed my lips against his. My heart began beating so hard I could feel it pound behind my eyes. It emptied the blood from my head, leaving a vacancy filled with dizziness. His mouth felt wonderful, his lips full and soft and crazily magnetic to my own. I had to back away to catch my breath, which seemed to be running like a prison escapee from my lungs.

I’m a single gay man living in the Midwest. I write because I consider myself to be an old-fashioned storyteller. I’ve been a photographer for half my life, specializing in male romance cover art. My dream is to one day live on the beach with my dog and continue to tell tales that inspire and entertain.

Contest will end on  April 7th and contacted via email. Please check your spam.
You will have 48 hours to respond to the email. After that time a new winner will be selected.


a Rafflecopter giveaway
Posted by Diverse Reader at 5:01 AM