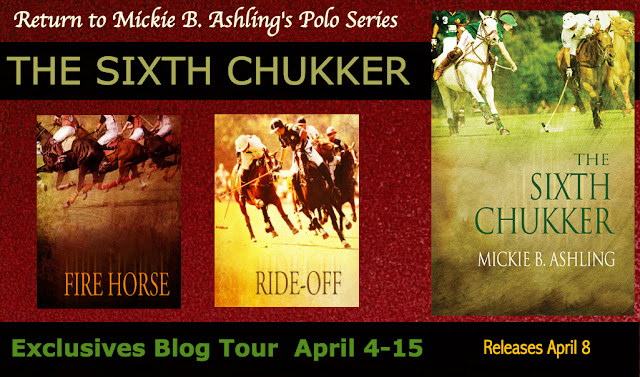 The Sixth Chukker is the third book in the Polo series and releases April 8th from Dreamspinner Press. It continues three years after Ride-Off and fans of the first two novels will be in for a treat as the entire cast of characters—plus one sexy new addition—reunite in this ongoing saga of the Fawkes-Schnell clan. I hope you’ll come along for the ride as retired polo players Preston and Konrad deal with former lovers, demanding children, and old enemies.
Once again, I’d like to thank Meredith for giving me an opportunity to appear on her wonderful blog and share this exclusive excerpt of The Sixth Chukker. A special shout-out to my publicist J for her consistent good work in organizing all my blog tours. As usual, I bring a few giveaways, which you’ll find in the Rafflecopter widget. 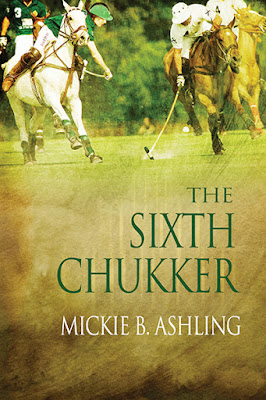 ABOUT THE SIXTH CHUKKER
Retired polo players Preston Fawkes and Konrad Schnell have finally found the happiness that eluded them for years. Their stud farm is a big success, and their marriage couldn’t be healthier. Unfortunately, this idyllic life is disrupted by several unexpected sources.
Paloma, Preston’s twenty-one-year-old daughter, is determined to be a 10 goal player before she turns thirty. Bandi, Konrad’s son, dreams of starting a family with his partner, Ned Temple. Paloma offers to surrogate if her father and stepfather come out of retirement and team up with her for one season.
Preston and Konrad would do anything to make their children happy, but they’re confronted with a stumbling block. Trauma specialist Dr. Rayne Carlisle refuses to sign off on the necessary paperwork unless Preston agrees to be his submissive for one week.
Caught between the proverbial rock and hard place, Preston and Konrad deal with disgruntled lovers, demanding children, and old enemies in this sequel to Ride-Off.

EXCERPT
Unlike Preston, Paloma made it a point to keep fellow polo players out of her bedroom. She’d learned from his experiences that shitting in one’s backyard was never a good idea. Unfortunately, keeping her distance made her more interesting to some men, who viewed her as another trophy to add to their collection. Fortune hunters considered her as a ticket to the good life. It was true that anyone who married her would automatically gain future ownership of a thriving horse ranch. Younger guys who only had sex on their minds were intrigued by her hands-off policy, and instead of being discouraged, pursued her with dogged determination, convinced they had the magic ingredients to change her mind. Paloma was aware that Preston’s contemporaries thought of her as the upstart from Argentina, living proof that he couldn’t keep it zipped.
She supposed things would have been different if she’d been included in her father’s life from early on. Many of her contemporaries had fathers, uncles, or brothers who’d competed with or against Preston. These kids had been fixtures at the club, always hanging around their relatives before and after matches, helping with the horses, and learning the sport from the ground up. Perhaps the older members would have taken to Paloma more graciously if they’d watched her transitioning from girlhood into the amazingly competent polo player she was today. Her hijinks on the field would be met with less criticism and more excitement if that were the case, and they also wouldn’t be so quick to shoot her down when she bragged about being better than anyone her age.
Unfortunately, Preston hadn’t even been aware of her talent on the polo field until she showed up out of the blue three years ago. He’d tried to make up for lost time and did his best to pave the path by introducing her to the right people while singing her praises, but she was still a stranger, and a woman to boot. In a sport dominated by men, she constantly fought for recognition, which was yet another reason why she banked on this upcoming season to prove she wasn’t just a pretty face.
She brightened when she arrived at her table and saw the familiar face of Sergio Morales, fellow Argentinian and aspiring polo player. He’d been one of two grooms she’d hired to accompany her ponies on their journey from Buenos Aires to London during her debut season. Sergio had decided to stay in England after the season ended. He was as obsessed with the sport as she but didn’t have the wherewithal or connections to fund his dreams. Until he found a way to overcome that major hurdle, he worked two jobs, one as a groom and the other as a waiter.
He pulled the chair out for her and she sank down gratefully, remaining silent while he unfolded the linen napkin and placed it gently on her lap. It was paradoxical that she allowed—and appreciated—the small gestures reserved for women in the old-fashioned world of etiquette since she was so vocal about wanting to be treated as an equal.
“¿Que tal, muñeca?”
Sergio’s warm greeting in Spanish, an endearment meaning “doll,” brought her some measure of comfort. Being around a fellow countryman meant fewer misunderstandings and certainly no need for the endless posturing that seemed so prevalent in this elite world of high-end polo.
“Super bien, hermoso, but let’s speak English or these people will think we’re gossiping about them,” she said softly, switching effortlessly from one language to the other.
“What fun is it being bilingual if you can’t use it to talk smack?”
She giggled. “Let’s save it for something good.”
“There’s a rumor going around that you’ve convinced your father to get back into the game,” Sergio mentioned as he poured ice water into her glass.
“We’re ironing out the details, but it looks promising,” Paloma replied.

ABOUT THE AUTHOR
Mickie B. Ashling is the pseudonym of a multifaceted woman who is a product of her upbringing in multiple cultures, having lived in Japan, the Philippines, Spain, and the Middle East. Fluent in three languages, she’s a citizen of the world and an interesting mixture of East and West. A little bit of this and a lot of that have brought a unique touch to her literary voice she could never learn from textbooks.
By the time Mickie discovered her talent for writing, real life got in the way, and the business of raising four sons took priority. With the advent of e-publishing—and the inevitable emptying nest—dreams of becoming a published writer were resurrected and she’s never looked back.
She stumbled into the world of men who love men in 2002 and continues to draw inspiration from their ongoing struggle to find equality and happiness in this oftentimes skewed and intolerant world. Her award-winning novels have been called "gut wrenching, daring, and thought provoking." She admits to being an angst queen and making her men work damn hard for their happy endings.
Mickie currently resides in a suburb outside Chicago.

RAFFLECOPTER GIVEAWAY
Four lucky blog tour participants will win a $15 Dreamspinner Press gift certificate OR one ecopy of The Sixth Chukker, Ride-Off, or Fire Horse. Contest open internationally. Must be 18 or older to enter.
a Rafflecopter giveaway