Promotional Post: As You Wish by Isobel Starling #Review #Giveaway 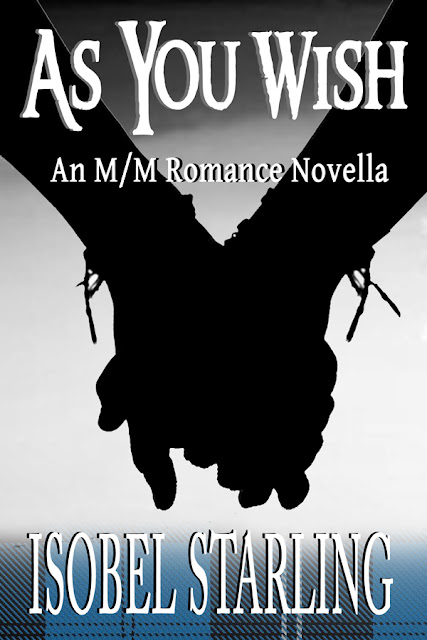 Declan Ramsay's brother Oliver was marrying Annabelle Aiken at a fairytale castle on the banks of Loch Ness in Scotland. The bride and groom decided, so that he didn’t feel left out, that Annabelle's gay younger brother could share the best man duties with Declan.

Declan had never met the kid who was to be his joint best man. Sam Aiken was abroad, working as an interpreter and finishing his studies. He wouldn’t meet Declan until a few days before the wedding, so the best men communicated and planned their speech by email for more than a year. But on meeting Sam Aiken, Declan is surprised to realize the kid isn't a kid at all, but a tall, blond and athletic young man. Declan is  alarmed by the ferocious attraction he feels for Sam. And as the attraction is reciprocated, the events at Dunloch Castle change everything Declan has ever believed about himself.
But is Samuel Aiken all that he appears to be?"

This is a sweet, gay for you, love story. Declan is a ladies man, uncontrollably so. He literally can't say no. It was madness lol. At times I wasn't sure how he was going to actually fall for a guy. But, alas.... It's an insta-love sort of thing. I'm not really into the whole insta-love thing. Love at first sight has never been something I believe in, but that's my personal opinion. The author does a great job with it however. So if that's your thing then this is your thing. The plot is a little out there but it sort of makes sense for these characters. Light & fluffy at times and sort of serious other times. It's an up and down story with an unsure ending. There's a full length novel coming soon so I'm interested in that.

Inspiration strikes at the strangest of times.
Born in Germany, Isobel Starling spent most of her twenty-year professional career making art.  She relocated to the UK and, faced with the dreaded artist’s creative block, Isobel started to write and found she loved it more than making art.  Isobel has just completed her sixth book.  She adores the M/M genre and enjoys writing about wounded souls and the complexities of personal relationships.  Despite not having found proof yet, Isobel believes in love at first sight and endeavors to give her men a thrilling journey and a satisfying ending!

Win this novella by Isobel Starling
Contest ends April 19th
Enter through the rafflecopter below.
Winner will be contacted via email so check your spam!

a Rafflecopter giveaway
Posted by Diverse Reader at 4:10 AM