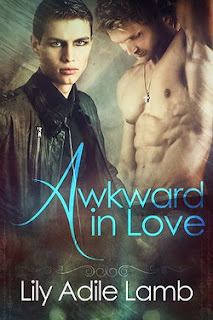 Title: Awkward in Love
Author: Lily Adile Lamb
Cover Artist: Jay Aheer
Length: 118 pages
Release Date: October 8, 2015
Blurb: Ilhan started off on the wrong foot with John, and somehow he always seemed to stay there. When the college student hastily looked away from the apartment building’s hunky maintenance man, John thought he was stuck up. When he tried to get John to knock on his door by leaving his trash out for pickup, John though he was a messy tenant. All he wants to do is get John’s attention, but he always seems to do it wrong…
John’s always seeing the little Turkish twink strutting around like a little peacock, in his too-tight clothes, but it’s hard to ignore that perfect little ass, no matter how bad his manners are. He’s nice to the other tenants, John knows, so he must be cold to John because of his job as a “mere maintenance man.” Too bad, because John would love to see what’s under those clothes.
Yet when one of Ilhan’s more embarrassing moments brings them together, each realizes they’ve been mistaken about the other, and also, so right. And all the awkwardness between them is washed away…
But when Ilhan’s conservative Turkish parents come to Perth to visit, and find their son locked in an embrace with another man, the stress of their demands could tear the two lovers apart...

I absolutely love how this all starts because of a “personality misunderstanding” Ilhan is absolutely adorable. Seriously, when I first read him that was my original thought. When I read John for the first time I thought, “How can anyone treat him like crap?” Of course you quickly see what has happened. Then you get to strap in and enjoy the ride.
However, it isn’t all that simple. We have a culture clash happening here. I wasn’t familiar with Ilhan’s culture. Turkish cuisine, lifestyle, all that comes with it. So on top of the fantastic plot, great flow, and fun. I got a wonderful lesson.
Ilhan’s parents don’t take well to his “choice” of lifestyle. And for Ilhan to have John through it all, warmed my soul.
This is a fun and beautiful story with a terrific lesson. 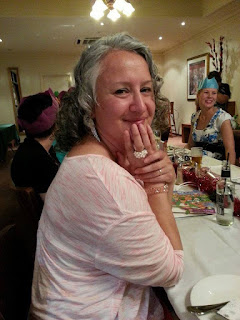 Lily Adile works as a nurse by day and writes GLBT Romance by night. Lily's focus in her GLBT stories are mere mortals because she believes that love is universal. Her mortal heroes and heroines are not rich, famous or incredibly handsome males with six pack bodies or stunning women... rather they are just everyday people who work hard and deal with whatever that life throws at them.
Lily believes that an individual's gender identity and expression is influenced by many factors including but not limited to culture, religion, social restrictions, custom and beliefs...this makes one's gender very diverse and fluid.
Lily is actively involved with Marriage Equality and stands by the same sex couples who want to have children.
Lily especially thanks her husband with all her heart for his endless patience, love and support. He is the love of her life and apple of her eye....he is the home she goes to at the end of a hard day at work.
Lily Adile was born in Ankara, Turkey and then worked in other countries. She visits her family in Turkey regularly and travels to Singapore to visit the other family members.
Facebook  ||  Twitter  ||  Google+