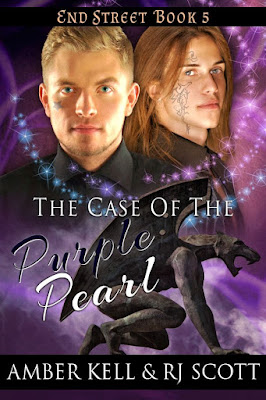 End Street Book 5: The Case of the Purple Pearl
By Amber Kell and RJ Scott
Due out 22nd November 2015
Buy links located here

Blurb: After failing in a quest to win the Fae Queen’s approval, Halstein is locked in a world of stone. Forced to remain a gargoyle he spends his days on Sam’s desk pining for his lost love.

Prince Idris’s lover went missing and was presumed dead. Alone, Idris lives a life away from court, starved of energy but unwilling to sleep in the room he once shared with his beloved.

Can Sam and Bob save these fated lovers before it's too late? And will Bob’s ultimate sacrifice be enough to free Hal from his prison?
Volume 1 - Books 1 & 2

Excerpt:
Smudge walked back into the room and jumped onto Sam’s desk He rubbed himself against Sam’s arm, spreading his scent.
The noise of stone against stone broke the quiet scene. “Who’s that?” a gravelly voice asked.
The gargoyle moved in shaky groaning increments to stand upright to its full twenty inches or so. He was looking down at the soul camera that lay screen up on the desk.
“Now you come out,” Sam said. “You realize I poked you three times.”
The gargoyle normally snarked back. He wasn’t known for his ability to say anything much in the way of nice. Bob didn’t like gargoyles unless they were inanimate and on the walls of a church. The lack of expression on the gargoyle’s face as it silently stared at the camera was freaky.
“Why do you have… is that…” In a sudden motion, the gargoyle crouched back into its stone shape and stilled.
“What the hell?” Sam poked it again with the same pen as before. No movement, none at all. “Is it just me or did he looked shocked.”
“He doesn’t have expressions,” Bob offered in support of why he hadn’t noticed.
Sam looked up at him disbelieving. “Yes he does, didn’t you see…” He trailed off. “Don’t tell me, I’m the only one that saw the shock and grief on the gargoyle’s face.”
Bob shrugged. “All I saw was stone and lidless eyes.” He shuddered. He hated those lidless eyes.
One more poke and Sam dropped the pen on the table. He returned to idly scratching Smudge behind his ears. Smudge purred, and Bob knew, given half a chance at having Sam scratching his ears, he’d probably be purring as well.
“Let’s have a closer look at this.” Sam rummaged one-handed in his drawer and pulled out a couple of cables. Examining them, he finally found one that slotted into his uncle’s camera then he pushed the other end into the ancient computer on his desk.
As the PC whirred and spluttered to life, Bob leaned over and pressed a kiss to Sam’s lips. “I love you,” he said.
Sam answered with a kiss of his own, and with Smudge twisting between them trying to find a comfy spot to park his furry butt, Bob kissed Sam with the same intensity as he had the first time.

RJ Scott has been writing since age six, when she was made to stay in at lunchtime for an infraction involving cookies. She was told to write a story and two sides of paper about a trapped princess later, a lover of writing was born.
As an avid reader herself, she can be found reading anything from thrillers to sci-fi to horror. However, her first real true love will always be the world of romance where she takes cowboys, bodyguards, firemen and billionaires (to name a few) and writes dramatic and romantic stories of love and passion between these men.
With over seventy titles to her name and counting, she is the author of the award winning book, The Christmas Throwaway. She is also known for the Texas series charting the lives of Riley and Jack, and the Sanctuary series following the work of the Sanctuary Foundation and the people it protects.
Her goal is to write stories with a heart of romance, a troubled road to reach happiness, and most importantly, that hint of a happily ever after.
rj@rjscott.co.uk
www.rjscott.co.uk/
https://twitter.com/Rjscott_author
www.facebook.com/author.rjscott
www.librarything.com/author/scottrj
www.tumblr.com/blog/rjscott  (some NSFW (not safe for work) photos)
www.pinterest.com/rjscottauthor/

Amber Kell is one of those quiet people they always tell you to watch out for. She lives in Dallas with her husband, two sons, and one extremely stupid dog.
amberkellwrites@gmail.com
http://www.amberkellbooks.com/
https://amberkell.wordpress.com/
https://www.facebook.com/amber.kell.7