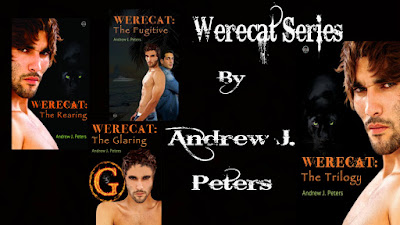 Andrew J. Peters has done it again. Now, even though it's labelled Werecat Trilogy, he is making it into a series. There are 3 books right now: The Rearing, The Glaring, and The Fugitive. You can get all three of these books as the trilogy, which I recommend. Let's look at each story individually, then the Trilogy, my review, and end it with a giveaway. 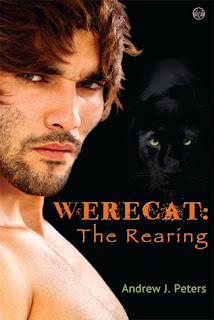 For Jacks Dowd, a college senior who feels ungrounded from his family and life in general, an alcohol and sex-infused weekend in Montréal sounds like a pretty good escape. His Spring Break binge takes a detour when he meets Benoit, an admiring drifter with startling green eyes. A hook-up turns into a day, two days, and then a full week in Benoit's hostel, making love and scarfing down take-out food. But at the end of the week, Benoit demands that Jacks make an impossible choice: stay with him forever, or go back to college and never see him again. 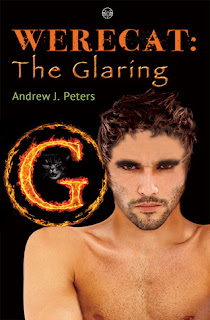 Free from Benoit, the man who made him a shifter, twenty-two-year old Jacks tries to get on his own two feet while crashing with Farzan, the only person who knows about his werecat nature. It will take a grueling schedule of off-the-books jobs and a steady mantra of self-control.

Then a raid on a bodega pushes Jacks to transform into his mountain lion self to fend off a group of gun-wielding gangbangers.

Jacks scrambles to disguise the truth, but the incident leaves a thundering wake of questions. The police want to know what really happened to a freaked-out young thug in custody. Farzan, who has been crushing hard on Jacks since they met, begins to doubt that it’s safe to have Jacks living with him. Jacks wants to know where he belongs: with the man who took him in when no one else would or among his own kind. As he searches for answers, Jacks is confronted by a secret shifter society The Glaring. They have come to avenge the death of Jacks’ maker and to claim a powerful item that Benoit left behind. 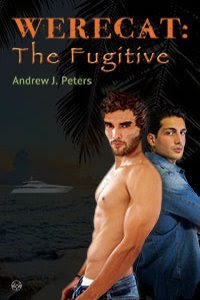 On the run after killing a Hunter from The Glaring, Jacks travels to the Bahamas with his only clue to what the secret society’s assassin was after: his maker’s key to a safety deposit box at an offshore bank. A thirty-day legal procedure holds Jacks up from uncovering what could be a hidden treasure.

Meanwhile, Jacks meets an alluring ex-pat named Maarten who hosts a nonstop pleasure cruise for disaffected werecats who have no interest in the politics of their kind. With his nerves scratched raw from living on the run, it’s too tempting of an escape for Jacks to turn away. But while he’s cruising the Caribbean and spending his nights in an orgiastic cuddle pile, The Glaring lays siege to New York City in a night of terror. Jacks’ boyfriend Farzan fights for his life and tries to reach Jacks overseas.

Jacks needs to emerge from a binge of drugs and flesh to defend his boyfriend. But can he give up the chance to be with his own kind for the first time in his life? When the secret in the safety deposit box is revealed, Jacks realizes that it’s up to him to get it before The Glaring uses an arcane magic that could destroy humankind. 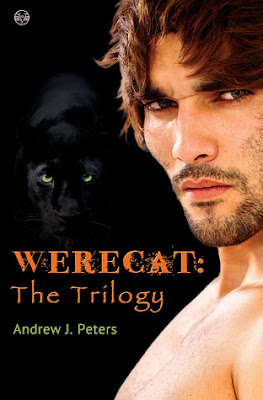 Twenty-two-year-old Jacks is on a mission to drown his past in alcohol
when he meets the handsome drifter Benoit on a lost weekend in
Montréal. It’s lust and possibly something more. Jacks never suspects
that a drunken hook-up will plunge him into the hidden, violent world
of feline shifters.
Benoit traps him in an arcane ritual to be joined as mates, from which
Jacks emerges with fantastical abilities and a connection to Native
traditions that were buried by his family. But his new existence pits
his human instincts against his wild animal nature. When Jacks meets
the young medical student Farzan, who wants to be with Jacks no matter
what or who he is, Benoit’s feline jealousy rages like an inferno.
Jacks must figure out how to survive with his dual nature and a
boyfriend who will kill any threat to their relationship. When a
secret society called The Glaring shows up with a plan to exterminate
humankind, Jacks will have to work quickly to gain command of Benoit’s
magic before the world shatters into a war of man against beast.

Who doesn’t love some dark magic? Right? I do. Andrew J. Peters wrote a spectacular trilogy. A trilogy he is turning into a series. That excites me because this closed on a cliffy and that made me all sorts of freaked out.
This is a wonderful journey of intrigue, mystery, suspense, and yes, magic! When I thought werecat at first, I didn’t really think deep enough. This book isn’t just one breed. There’s panthers, lions, tigers… the whole big cat clan going on. I really found that to be awesome.
Of course what made this so wonderful for me was the whole: ONLY ONE CAN SAVE THEM ALL, situation.
These books were dramatic, suspenseful, exciting, and thoroughly entertaining! Can’t wait for more!

Want to win the first three books in the Werecat series? All you have to do is fill out the rafflecopter below.
Contest will run until November 14th. Winner will be contacted via email so please check your spam. You'll have 48 hours to respond. A second email will be sent out in case there was an error. If there's no response it will go to the next random winner. Good luck everyone!