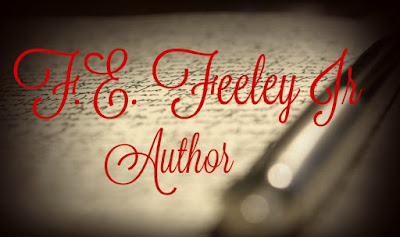 My awesome Saturday Spotlight author today is F.E. Feeley. He's written some outstanding books such as: The Haunting of Timber Manor, Objects in the Rear View Mirror, Still Waters, and more.

Today he's here to talk to us a little about himself, his books, and other crazy things I've forced him to answer. I'll show you some of his work, and we'll end it with a fabulous giveaway. So, let's get started. 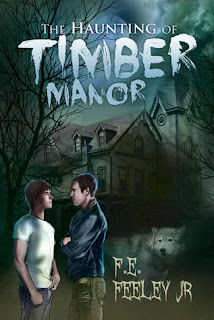 The Haunting of Timber Manor

While recovering from the recent loss of his parents, Daniel Donnelly receives a phone call from his estranged aunt, who turns over control of the family fortune and estate, Timber Manor. Though his father seemed guarded about the past, Daniel’s need for family and curiosity compel him to visit.

Located in a secluded area of the Northwest, Timber Manor has grown silent over the years. Her halls sit empty and a thin layer of dust adorns the sheet-covered furniture. When Daniel arrives to begin repairs, strange things happen. Nightmares haunt his dreams. Memories not his own disturb his waking hours. Alive with the tragedies of the past, Timber Manor threatens to tear Daniel apart.

Sherriff Hale Davis grew up working on the manor grounds. Seeing Daniel struggle, he vows protect the young man who captured his heart, and help him solve the mystery behind the haunting and confront the past—not only to save Daniel’s life, but to save his family, whose very souls hang in the balance. 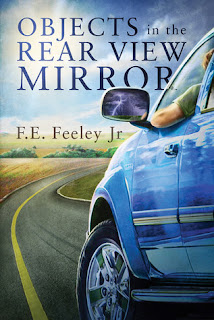 Objects in the Rear View Mirror

Their new home on Frederick Street in Clay Center, Kansas, was supposed to give writer Jonathan David and his husband, clinical psychologist Dr. Eddie Dorman, an opportunity to enjoy married life. Jonathan has just released his first major bestseller, and he hopes to finally escape his traumatic past and find the quiet existence he has always craved. Eddie has taken a job at the Kansas State University psychology department, and they intend to begin anew.

They have barely settled in when the nightmare begins. Noises, disembodied voices, and mysterious apparitions make Jonathan’s life hell. Part of the house has decided to bare its teeth, show its jagged edges, and bring back the worst of Jonathan’s past. At first, Eddie cannot perceive the spectral events and fears for his husband’s sanity. When he’s also affected by the haunting, he’s unsure of what to do but refuses to be beaten.

Together, they seek a way to fight the forces trying to tear them apart. The world is a frightening place, but confronting their fears plunges Jonathan and Eddie into absolute horror. 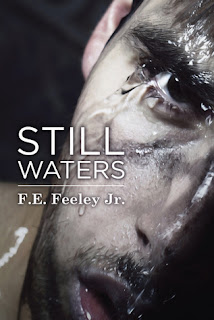 Promise, Michigan is very much like every other small town across the state. Built on the edge of a lake, the homes sit in neat little rows in cute little neighborhoods. During the summer Promise bustles with tourists who come to spend their vacation dollars and enjoy the lake’s refreshingly cold water. But Promise holds a terrible secret. In the center of the lake is an abandoned island where a curse is rumored to wait for victims, unabated and deadly. Most think it’s just a story, something used to keep kids out of trouble. Still, everyone gives it a wide berth. Everyone except Bret and Adam. They dare to venture out the night of Bret’s birthday. When they declared their love and promise to get married, they believe no one else heard their whispered words—but they are wrong.

Five years later Adam dies, and Bret returns to his family to heal. But someone is killing the people of Promise in random acts of violence. Bret, with the help of FBI agent Jeff McAllister, must discover the identity of a murderer with death on his mind and revenge in his heart.

I really want to thank you for being my spotlight author today. Anyone who pays any attention to the
M/M genre should know who you are. You are very active in social media and you interact with your
readers. I love that.
I have a few questions for you today. Hopefully they aren’t painful and I have no doubt you will speak
your mind.

Right off the bat there’s one question I really want to ask you. What is the biggest misconception
people make about you?

I have no clue. I hope nothing bad. I am very forward in the way I speak. It’s
sort of a boon and a cross at the same time. If anything is worthy of saying, it's worthy of saying
directly. I think maybe I might rub people the wrong way in the way that I present myself and if that’s
the case, I am sorry. I don’t mean to be offensive. Like Bono said in his Rattle and Hum song, I didn’t
come here to bug ya.
Ya know, on second thought, I’ve had people tell me I am angry. That they are afraid to approach me
online. Please don’t be afraid. I am a really nice guy. I promise. Sometimes I do get angry, yes that is
true. But when it comes to the feelings of another person, I would cast myself off a building before I
ever intentionally hurt another human being. Even if I have words with someone, it doesn’t mean that
I wish them ill or would be monstrous toward them. If I can’t jive with someone for whatever reason,
it’s okay to part ways.

If you could have dinner with only three characters you’ve written what three would you choose?
I
would love to have dinner with Francine- so I can figure out where the crap she wants me to take this
entire story arc in Memoirs. I would like to meet with Maggie from Objects- I think she’s sweet. And
Jonah as well. The gay men, I know. They are me or a part of me. So I am very familiar with them.

Characters often find themselves in situations they aren't sure they can get themselves out of. When
was the last time you found yourself in a situation that was hard to get out of and what did you do?

I
grew up evangelical. The last time I was in over my head concerning something like this, I packed my
bags and left. It gave me perspective, distance enough to think about it, and in doing so- I had to
relearn me and my worth. I didn’t run. I just retreated to regroup and sometimes there aint nothing
wrong with that.

If you could collaborate with just ONE author, who would you like that to be?

Oh, God. I have a collab
effort that I paused with Jamie Fessenden that I would like to return to. That I intend to return to. And
I thank God that he is so patient with me.

If you could have any accents from anywhere in the world, what would you choose?

Irish. I like it. I
actually looked into learning Gaelic. Then I saw how extremely different our languages were and
decided pig latin was a good alternative.

Jonathan David from Objects in the Rearview Mirror.

If you had to pick one of your books to become a motion picture movie, which would you like to see
up there?

Objects in the Rearview Mirror. I think it's an important story.

Is there one topic you refuse to ever write about? What is it?

The military. I won’t write about it
directly, even though I was in it for four years. Simply because I won’t allow myself to intentionally or
unintentionally misrepresent them in anyway. I don’t ever want to trope a group of people to make a
profit. I’ve just seen hack jobs done in regards to military or vets or people with PTSD and it just
boggles my mind.


Can you tell us what you are currently working on and any future projects?

I have a couple pokers in
the fire. 1. Is a contemporary Romance called Good enough. 2. Is a continuation to Objects in the
Rearview Mirror. 3. is that work with Fessenden that I NEED to get back to. 4. And then there is always
bits of poetry that for whatever reason I feel inspired to write on my blog.

How can your readers find you on the interwebs?
They can find me exclusively at my website
www.authorfefeeleyjr.com
Thank you so much for being here today. It has been a lot of fun.

F.E. Feeley Jr is going to gift ONE person one of each of his Dreamspinner Press ebooks.
That's one hell of a giveaway!  So, be sure to enter the rafflecopter below.
Contest will run until November 27th!

Big thank you to F.E. Felley Jr for being here today!
Make sure you all review what you read!

a Rafflecopter giveaway
Posted by Diverse Reader at 5:55 AM