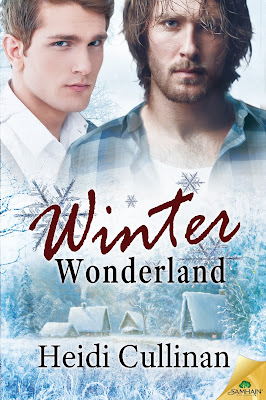 Finding Mr. Right can be a snow lot of fun.
Paul Jansen was the only one of his friends who wanted a relationship. Naturally, he’s the last single man standing. No gay man within a fifty-mile radius wants more than casual sex. No one, that is, except too-young, too-twinky Kyle Parks, who sends him suggestive texts and leaves X-rated snow sculptures on his front porch.
Kyle is tired of being the town’s resident Peter Pan. He’s twenty-five, not ten, and despite his effeminate appearance, he’s nothing but the boss in bed. He’s loved Paul since forever, and this Christmas, since they’re both working on the Winter Wonderland festival, he might finally get his chance for a holiday romance.
But Paul comes with baggage. His ultra-conservative family wants him paired up with a woman, not a man with Logan’s rainbow connection. When their anti-LGBT crusade spills beyond managing Paul’s love life and threatens the holiday festival, Kyle and Paul must fight for everyone’s happily ever after, including their own.
Warning: Contains erotic snow art, toppy twinks, and super-sweet holiday moments. Best savored with a mug of hot chocolate with a dash of spice
Buy Links:
Buy From Publisher
All Romance Ebooks
Barnes & Noble (Nookbook and paperback)
Amazon US ebook
Amazon UK ebook
Google Play
iTunes Bookstore
Kobo
Add to Goodreads 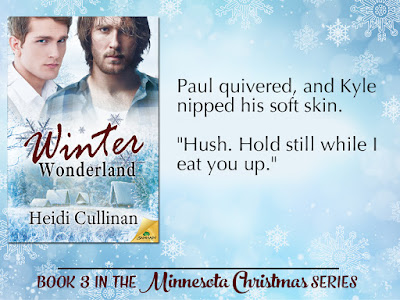 With the cupcakes finished and the reason they’d gotten together in the first place punted to Sunday, Paul should offer to drive Kyle to his car and let him go home. Instead, he stared at Kyle again, and once more, he was caught.
Kyle touched the side of his hair self-consciously. “Why do you keep looking at me that way? You make me feel like I’ve grown a unicorn horn.”
Paul fumbled with what excuse to give, which somehow led him to confessing the truth. “You’re different tonight.”
Kyle frowned. “Different than what?”
“Than you usually are. Though, I guess we haven’t spoken much before.”
Except for the mostly one-sided sexting.
Paul cleared his throat. “So, uh. Stencils and snow…stuff. I didn’t realize you were so into art.”
Kyle nodded, relaxing somewhat. “I’ve always been creative. I did more sculpture than painting in school.”
“You’re good. The snow dicks were…lifelike.”
Kyle gave Paul another sideways look, as if to ask, Why are you bringing this up? “I enjoy making snow sculptures. Linda gets one every fresh snowfall. At the rate this winter is going, we’ll have to branch into a field to house them.”
“How did you make them so fast? The ones on my porch?”
“Oh, I’m pretty clever when it comes to cock.”
The quip came with Kyle’s affected voice, except instead of simpering affectation, it was a whip crack. It startled Paul, inspired him to sit a little straighter. Kyle didn’t blush, simply stared Paul down.
Paul tried to regain his ground, but between Kyle’s sharp gaze and the mental image of Kyle being good with cock, it disarmed him. He reached for a familiar wall. “I— Sorry. I didn’t mean to start anything again.”
Kyle’s lips pursed as he stood up. He reached for his coat. “I should be heading back.”
Paul rose too. “Kyle, I didn’t mean it like that.”
Kyle waved a hand at Paul, a gentle flick of a slight wrist. “Enough. Message received. I won’t flirt with you anymore, even for fun.”
Paul hurried after him, eventually cutting him off. “Look. You’re a great guy.”
“But you’re not interested, I know. I was making a damn joke.”
“It’s not that I’m not interested. But you’re too—”
Kyle’s gaze flashed a half-second warning before he whipped out a hand and covered Paul’s mouth. When Paul stumbled away, Kyle came with him, until Paul’s back went flat against the door.
“Don’t say another word.” Kyle stared angrily down at him—down, yes, because he was a little bit taller than Paul, though decidedly less than half his width. It didn’t seem to matter in that moment.
“Don’t say I’m young. Don’t say you’re old. Don’t fucking say a word because I don’t want to hear it. It’s demeaning to us both. I’ve already figured out you’re not interested. I’m a big boy—all grown up—and I’ve moved on. Personally, I think it’s your loss because I have it on several authorities I’m absolutely wicked in bed. Not quite as intense as Arthur, maybe, but then that didn’t exactly work for you, did it?”
When Paul startled, Kyle grinned a grin that made Paul’s guts churn with want.
“Go ahead and think I’m some infant twink wiggling my ass at you, hoping to get plowed by a sweet teddy bear.” The grin faded, leaving only feral heat. Kyle didn’t stroke Paul’s face, but he could swear he tingled simply from the focused gaze of the man before him. “I’m not an infant, I can’t help my body type, and if I got you in the same room as a bed, it wouldn’t be my ass sore in the morning.”
Paul couldn’t speak, his breath coming in erratic staccato bursts. When his shock bled away, it left him still paralyzed, but with want, not fear. That can’t be right, his brain kept telling him, except as he stared at Kyle, really looked at him, he was pretty sure his brain was wrong.
Paul also suspected, with the way Kyle kept leaning closer, a fiery warrior closing in on his prey, he was about to get kissed. To his surprise, he was ready to be kissed. By Kyle Parks. Against the back of the shop door. An angry, I’ll show you kiss that already had Paul melting inside.
At the last second, however, Kyle stopped. He drew away, averted his gaze. Then he zipped up his coat and pulled his hat and mittens from his pockets with shaking hands. “I—I should go.”
Don’t go. That was insane, so Paul swallowed it. “I’ll drive you.”
Kyle jammed the hat over his hair. “It’s fine. I’ll walk.”
No, that was insane. “It’s a mile plus to the café, and it’s ten degrees outside.”
“Sounds perfect.” Kyle wrapped his scarf around his face and saluted Paul with a fat mitten. “Text me about Sunday.”

He pushed Paul aside and opened the door, and Paul watched him trudge through the falling snow into the dark night. 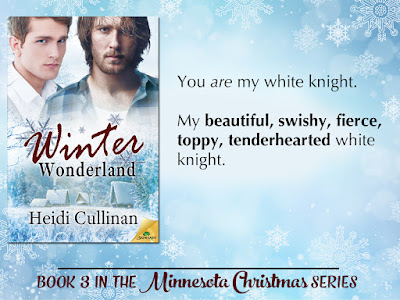 OH MY MY MY! This is book three in Heidi’s Minnesota Christmas series. Each one touched my heart. But none as much as Winter Wonderland. Paul’s character I just wanted to protect him, love him, bake him things, and murder his family. Thank God for Kyle. Seriously. Paul needed him. It was a love story that had me in tears more often than not. My heart ached and then it soared. I loved Kyle and Paul together. Everything made sense when they were together.


Winter Wonderland really showed that sometimes family isn’t blood. SOMETIMES we find love and acceptance in friends, in strangers, and in community. This book shows love in all the shapes, sizes, colors, and genders.


When I was done reading this I wanted to put up my Christmas tree. I wanted to have a snowball fight. Hell, I wanted to track down a Lifetime Christmas special and force my husband to knit me socks while we watched it!


This is a perfect book to put you in the holiday spirit and to appreciate the love you have. 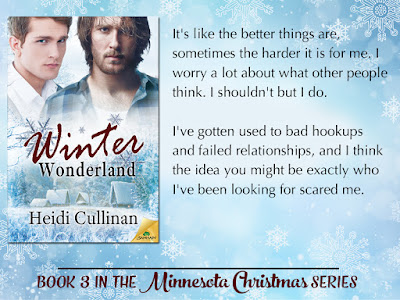 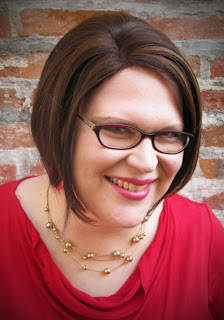 Grand prize giveaway open from Novemeber 1-30. Includes paperback copies of Let It Snow, Sleigh Ride, and Winter Wonderland, and a Logan-themed mug. All blogs participating in the tour are welcome (but not required) to include the rafflecopter in their review or post about the release.


a Rafflecopter giveaway
Posted by Diverse Reader at 4:43 AM