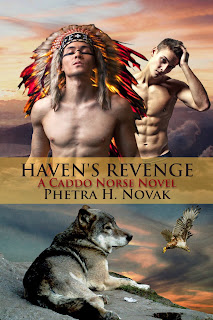 Title: Haven’s Revenge
Series: A Caddo Norse Novel
Author: Phetra H. Novak
Publisher: Self-published
Cover Artist: Shayla Mist
Length: 305 Pages
Release Date: October 23, 2015
Blurb: Haven Naranjo is a proud Caddo Indian, with a frightening past. He was a mere fifteen year old boy when he found his parents, part of his tribe, and his high school sweetheart slaughtered by a wereman gone mad. Falling victim to a system that is not always prepared to deal with a shattered young mind, Haven finally gives up on himself. He grows up to be bitter and hateful toward the creatures he hate. Werewolves.
Alexander Prescott is the younger of the two Prescott boys and comes from a large werewolf clan. But things are bigger than that. Alexander, is the true vessel of the Fenrir Ulv and is to become the leader of all supernatural beings, the King of Wolves. On top of that, he’s in love with Haven. He’s known since he hit puberty that Haven is his true mate. But there’s one problem, Haven hates what he can become. However, Alexander has a plan on how he is to charm his, and his wolf’s way into the grumpy Caddo Indian man’s heart.
But fate has other plans for them. The Asa Guard enters their calm country living, determined to use their own kind against them and kill the true vessel—Alexander Prescott.
When war between the Asa Gods and the Fenrir Ulv starts knocking on their door, what side will the damaged Haven choose? Will he find a way of trusting those, especially Alexander, who he feels has betrayed him and let his animal, the eagle, lead him straight to his fate by his mate’s side? Or will he trust the words of strangers, who come to make his quest of seeing all shifters dead a reality?
Haven’s Revenge is a story of an emotional journey for a whole community. It’s about finding acceptance not just from others but in yourself.

"Did you have a good time shopping?"
Haven didn't answer. He knew James had heard and was just trying to get a rise out of him. "I heard you ran into Mrs. Harris."
Haven didn't have to look at him, to know he was trying not to laugh.
"Nice to know some things around this place never change." Haven huffed. "You all gossip worse than women."
"Oh, don't you worry, it will have blown over...oh, in a month or so." James snickered with a grin plastered all over his face.
"She's a bitch."
"Yes. That she is, and you told her, didn't you?"
"Well someone had to," Haven muttered.
"You know, her man is putting a lot of cash into the water system."
"Yeah, yeah. She told me already, and I know. Why is it that every time someone gets on my ass about something, everyone blames me for shit going south?"
"No one is blaming you here, Haven. You just don't tend to think before you speak, and that mouth of yours is dirty as sin." James cackled.
"If you only knew," Haven muttered.
James clapped him on the back. "Just so you know, I called ahead. I thought it might be a good idea to give him a chance to calm down some before you get there."
"Well, wasn't that kind of you? I’m sure it was all to help me out."
"It was for sure, even if you‘re too grumpy to realize it. Hearing Coleman curse up a storm was just an added bonus."
"Damn, gringo," he muttered sourly. "If he’d mind his own damn business, that would be good, just like the rest of you bastards should do." Haven pouted, putting the last bag of groceries on the passenger's side floor, slamming the door shut as he turned back and looked at James. "Don't you all have jobs to do instead of sitting around gossiping like women all day long?" He glared at him.
"Hey now, you can't blame a man for grabbing whatever entertainment comes his way."
"Oh screw you, James Stevens." Haven pointed a long finger at him, narrowing his eyes. "I'll just send the bitch of the west your way then, and we'll see how much fun you think it is when she grabs you by the balls."
James shoulders started to shake, he was laughing that hard.
Haven gave him another dead look, huffing. As he walked around his truck, he muttered loud enough for James to hear, "Asshole."
Still laughing, James waved to Haven as he drove off, yelling, "Have a good one, Romeo!"

Phetra often refers to herself as the odd man out, the dorky book nerd who rather spend her time with a good book or making up fantastic stories with even more fantastic characters, than live in the real world dealing with real people.
The real world is strange in a very non humorous way and people in it complicate it to the point of wearing you out. In the world of the written word no matter if it is in someone else's words or that of her own things might get busy, complicated, and sometime even plain painful but somewhere along the line there is always a hero on the horizon. He might not be prime or proper, a church going pretty boy since the author prefer rebellious men and women who don't follow the protocols of society.
One of her favorite saying are that only dead fish follow the stream and well she ain't no dead fish.
Phetra live together with her family, two children, a domestic partner and their two cats in Gothenburg, Sweden and when reading her books you will notice that she always finds a way of bringing her on culture into her books.
The joy of writing and reading comes from her childhood and is something she has always loved, something she is passionate to share with others. Phetra loves hearing from her readers even with ideas of what they want to come next.
If you are looking for her the best place to start looking for her is at home in the quietest corner of the house where you'll find her either curled up with her Kindle or her laptop typing away.
Facebook Page  ||  Twitter  ||  Google+  ||  Goodreads

Winner’s Prize: An e-copy of the book