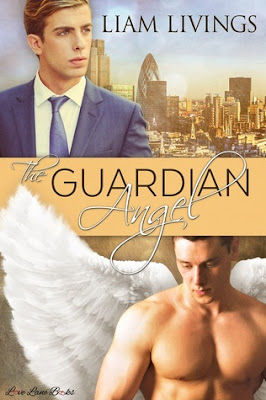 Blurb:
What happens when a man falls in love with his guardian angel?
Richard Sullivan is plagued by white feathers turning up at the oddest moments. Amy, his best friend, suggests his guardian angel is trying to contact him, but he dismisses the idea out of hand as nonsense.
Until, that is, he meets Sky. Six feet of muscle in a man skirt with white feather wings.
What exactly is a guardian angel? And what happens when your guardian angel takes leave and sends in a temp to cover? Do you wait for a perfect boyfriend on the off chance you may be able to touch him, to be with him, or do you grab happiness with another human? And, why the hell has Richard’s life suddenly become so complicated?

Excerpt:
It all started on my way back from the wrong job. I’d just turned it down because I couldn’t stand to listen to that lot going on about sustainability this and putting bees on the roofs of houses that. I just wanted them all to fuck off. I didn’t need their job offer. I had a good feeling the law firm application would get me onto their graduate scheme. I knew it. I could feel it in my water.
The law firm sent me a letter thanking me for the application. And good luck with my other job searching.
Fuck it.
I returned to the office just west of Liverpool Street station to do my last week of temping—my last week temping there, after a long series of temping jobs, some of which had made me want to jump under the train some mornings, others I could just sail through with my brain in neutral. And now this one. Well, this one was fine.
It had been fine. At first I thought it was quite interesting to try to do what New York City had done with its unloved, unknown areas, and name them. Like their SoHo was the area south of Houston Street. TriBeCa was the Triangle Below Canal Street. All this was interesting and news to me when I’d started at the Between Town Partnership. They were trying to make the area between the City of London, Liverpool Street, and the West End, happen. At the moment it was a sort of nowhere between the proper shopping of the West End and the financial district—a sort of no man’s land. No one had reason to go there specifically, unless they worked there, as I had for a variable three months.
I turned on my PC, went to the kitchen to make myself an instant coffee, but not Nescafé because they were doing something nasty about bottle-feeding in Third World countries. I had listened at the time, a bit, but had just internally rolled my eyes. No, this was all free-range, organic, preloved coffee. Shame it still tasted of shit, though.
I sat at my PC and noticed a white feather next to the mouse. I picked it up, looked at it closely, noticing it was pretty perfect as far as feathers went, and then threw it in the bin.
The morning passed without incident: spreadsheets about the CO2 output of various buildings, some brainstorming for this new area, and another offer of an extension to my contract.
“I’ll think about it, thanks,” I said, folding the offer letter into my bag and leaving for lunch.
I sat on a bench in a little park. The grass was covered in office workers, each eating their lunch and grabbing some air and sun for a moment in their day. I pulled out the offer letter from my bag, and another perfect white feather fell into my lap. This one was a bit larger—as big as my index finger—and still perfectly white, still not bent or dirty. I folded it back with the offer letter, then rang Amy at work. She’d know what to do.
“Good morning, The Music and Video Shop, how can I help you?”
“It’s me. How’s your morning?”
She swapped her phone voice for her proper, slightly Welsh accent. “Busy as it goes. I can’t believe people still actually come into a shop to buy this stuff.”
“Just be thankful they’re trying to close down Pirate Cove. And there’s plenty of people who don’t know how to use it anyway, playing it safe, buying DVDs and CDs from you lot.” I paused, thinking about my morning, my situation, and the feathers; she’d want to hear about those. “So, white feathers, what do they mean?”

I love the concept of this story. Growing up I was always told that every person had a guardian angel. I’d love to believe that to be true. In this story Richard actually meets his guardian angel, Sky, and they fall in love. Now, that much you gather from the blurb. What I wasn’t expecting is that it’s not until Richard goes through a serious life journey does the happily ever after really begin. Richards’s story is all ups and downs. Nothing comes easy to him. Jobs, love, his family, friends. Things fall apart royally for him.
There are some things I feel aren’t properly addressed but other parts are addressed and explained in ways I never thought of. So it did balance itself out well for me. Sky is fabulous. I wish he had more book time than he did because his love for Richard and his adorable pure, fresh outlook on life was like a breath of fresh air.
This is a lovely story, fairly long, but very interesting for those who wonder what it would be like to meet your guardian angel.

About Liam Livings
Liam Livings lives where east London ends and becomes Essex. He shares his house with his boyfriend and cat. He enjoys baking, cooking, classic cars and socialising with friends. He escapes from real life with a guilty pleasure book, cries at a sad, funny and camp film – and he’s been known to watch an awful lot of Gilmore Girls in the name of writing ‘research’.
He has written since he was a teenager, started writing with the hope of publication in 2011. His writing focuses on friendships, British humour, romance with plenty of sparkle.
You can connect with Liam
Twitter @LiamLivings
Facebook https://www.facebook.com/liam.livings
Blog http://www.liamlivings.com/blog
Website www.liamlivings.com

Giveaway:
Win a $15 Giftcard from Amazon or ARe, plus 2 further prizes of an ebook from Liam’s catalogue. Competition closes 11th December – midnight GMT.


a Rafflecopter giveaway
Posted by Diverse Reader at 5:27 AM