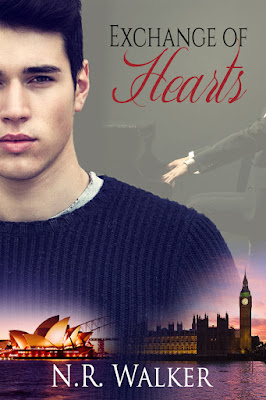 Blurb: Eighteen-year-old Harrison Haddon has grown up alone. Surrounded by wealth, nannies, and material things, all he craves is the approval of his father. Sent away to the boarding school his father and grandfather attended, it’s assumed he will follow in their footsteps from Sydney’s prestigious Ivy League school straight into medical school.
But Harrison doesn’t want to be a doctor.
He dreams of music and classical piano. His only true happiness, his escape from the world expected of him, is dismissed by his intolerant and emotionally detached parents.
Levi Aston arrives from London for a three-month student exchange program. Free-spirited and confident in who he is and what he wants to do with his life, Levi convinces Harrison not give up on his dreams.
But convincing Harrison not to give up on his family might not be so easy.

What a brilliant and beautiful story. Harrison and Levi were love personified. When they professed their love to each other throughout this book it was lyrical. I found this book to be a breath of fresh air. Young men, one living their life how they dreamed, the other living their life for someone else. As we know it takes a powerful kind of love to make you brave. That was Levi for Harrison.
So many times while reading Exchange of Hearts I wanted to write down quotes NR wrote. I soon realized it was getting out of hand and just agreed that it was outstandingly well written.

This is a stunning tale of hope, living, accepting, and loving. It hugged my soul and I loved every second of it!

N.R. Walker’s Bio: N.R. Walker is an Australian author, who loves her genre of gay romance.
She loves writing and spends far too much time doing it, but wouldn't have it any other way.

She is many things; a mother, a wife, a sister, a writer. She has pretty, pretty boys who live in her head, who don't let her sleep at night unless she gives them life with words.

She likes it when they do dirty, dirty things...but likes it even more when they fall in love.

She used to think having people in her head talking to her was weird, until one day she happened across other writers who told her it was normal.


a Rafflecopter giveaway
Posted by Diverse Reader at 3:26 PM