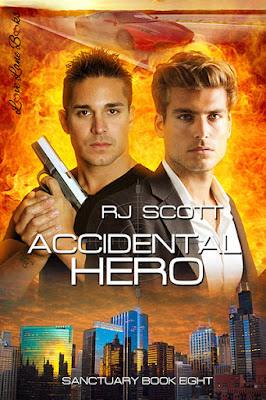 Blurb: Chicago Cop Simon Grant and Sanctuary operative Cain Brodie, have to be the heroes of their own stories, just to stay alive.

Everyone wants Chicago cop, Simon Grant, dead. Armed with an address, he is on the run and heading for Sanctuary, only to end up at the wrong end of a gun. Is it possible the tall amber-eyed man holding the gun is actually going to be able to help him?

Cain Brodie is in charge of Sanctuary’s new Chicago office, C-Tower. His well organised administration day takes an unexpected turn when he has a man wanted for murder right in his gun sights. Thrust into a situation he has no control over suddenly he needs to be the one in control.


Accidental or not, Simon and Cain have to be the heroes of their own stories, just to stay alive.

Excerpt:
Chapter 1
Everyone wants us dead.

Blog: It’s always so hard to come up with ideas for blogs but this time I thought I would explore bits of my favorite spy/action/buddy movies, given that Accidental Hero is a bit of both.
My favorite buddy relationship has to be Riggs and Murtaugh from Lethal Weapon. I first saw this film way back when it came out and it ticked every single one of my boxes for action, drama, and most importantly two guys working together who at first really don’t enjoy it, only for a few weeks later to be prepared to die for each other. This dials into my kink of heroes who will do anything for each other because they are *that close*.
The iconic scene for me is the scenes in the factory towards the end of the film – Riggs tied up, Murtaugh being beaten up and his daughter threatened. I love that point in a film where even though you know the heroes will escape you can sit back and enjoy the fact that they are seemingly going to die.
Do you have a favorite buddy movie?

About RJ
RJ Scott has been writing since age six, when she was made to stay in at lunchtime for an infraction involving cookies. She was told to write a story and two sides of paper about a trapped princess later, a lover of writing was born.
As an avid reader herself, she can be found reading anything from thrillers to sci-fi to horror. However, her first real true love will always be the world of romance where she takes cowboys, bodyguards, firemen and billionaires (to name a few) and writes dramatic and romantic stories of love and passion between these men.
With over seventy titles to her name and counting, she is the author of the award winning book, The Christmas Throwaway. She is also known for the Texas series charting the lives of Riley and Jack, and the Sanctuary series following the work of the Sanctuary Foundation and the people it protects.
Her goal is to write stories with a heart of romance, a troubled road to reach happiness, and most importantly, that hint of a happily ever after.
rj@rjscott.co.uk
www.rjscott.co.uk/
https://twitter.com/Rjscott_author
www.facebook.com/author.rjscott
www.librarything.com/author/scottrj
www.tumblr.com/blog/rjscott  (some NSFW (not safe for work) photos)
www.pinterest.com/rjscottauthor/

Giveaway:
Win a $15 Giftcard from Amazon or ARe, plus 2 further prizes of an ebook from RJ’s catalogue. Competition closes 4th December – midnight GMT.


a Rafflecopter giveaway
Posted by Diverse Reader at 5:58 AM