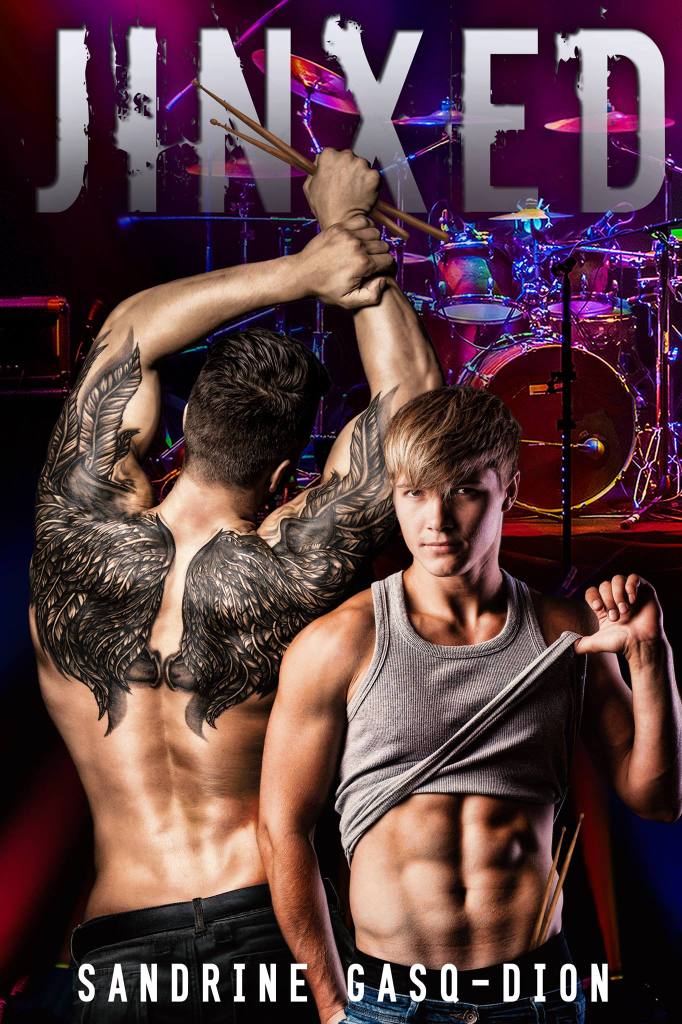 BLURB: Jinx Jett is a rock superstar. As such, the hunky Skull Blasters drummer thoroughly enjoys the many perks of willing groupies, earning him a reputation as the band slut. Making it big and scoring hot women is something Jinx never expected. There's a little voice in the back of his mind constantly reminding him of how he used to be -- shy, overweight and acne prone. One night in a gay bar turns life upside down when Jinx runs into Jayden Dempsey, a kid he's been fantasizing about since giving him his autograph at a mall. Long-held insecurities keep Jinx from fully committing to anyone, and he may lose Jayden if he can't put his past behind him.

Jayden Dempsey always wanted out of his life in small-town Alabama. When his parents kicked him out after he told them he was gay, Jayden decided the time was right to move on. He crosses the country to try out for 'Singers!', a show that propels unknowns to stardom. In a twist, producers choose him and three others as winners and form a boy band called London Boys.This season, the show brings Jayden and the guys back for the finale. Surprise! The contest's heavy metal finalist will be singing with Skull Blasters.

Jinx and Jayden's initial meeting doesn't go so well, and Jayden's stunned when the guy he's crushed on for years turns out to be a total jerk. It doesn't stop him from falling into Jinx's arms every time they're alone, but Jayden didn't sign on for one nighters. He wants Jinx Jett, baggage and all.

Can a former teen outcast put rejection behind him and embrace the acceptance standing right in front of him? How much will one boy bander put up with from his rock idol before enough is enough? Can they make it work? Or are they jinxed in love?

“Can I get some clothes?”

“I like you in a robe.” Jinx waggled his brows.

I started for the door and Jinx jumped up and grabbed my hand. He pushed me into the wall and gently pinned my hands above my head.

I gasped as his thigh insinuated itself between my legs, rubbing my balls.

“Yeah?” his breath caressed my lips.

“This?” Jinx raised his knee higher and rubbed my dick.

My God, my mouth actually started watering as Jinx leaned in closer to me, letting his tongue trail my bottom lip. I wanted to taste him so fucking bad my whole body hurt. I wanted him. I couldn’t deny it.

“Fuck, you are sexy as sin,” Jinx rumbled against my lips. “Love your lips, your eyes, even your fucking hair turns me on.”

I clenched my eyes shut and tried to stay in control.

“Yeah? Even if I’m a talentless pretty boy?”

Jinx stiffened. He pulled back slowly and searched my eyes.

“Yeah? Why did you say it? What’s your problem with me being in a boy band?”

Jinx sighed and let my hands go. He rubbed his hands down his face and exhaled slowly. I continued to speak because by that time, my word vomit had begun.

“I don’t even like boy bands, but you know what? This is where I am and fuck it! I’m successful. Do you know I auditioned with one of your band’s songs?” Jinx’s gasp was very audible in the room. His eyes widened. “Yep, that’s right. I sang Manwhore; the song fits you.”

“Are you going to tell me what your problem is?” I placed my hands on my hips, glaring at him.

The boys are back! Book 1 (FRET) we met them all, fell in love with them all, and got wrapped up in the drama that is the Skull Blasters!
In Jinxed we get to watch man-whore Jinx Jett fall head over heels with someone in a… BOY BAND! Say what!? Yeah, that part was hilarious. But Jayden isn’t cut and dry. What you see isn’t what you get. He has layers to him and watching Jinx peel each one was utter entertainment.
This book is a lot of fun. It was a great sequel to this already awesome series!

Winner’s Prize: Swag pack of a key-chain, bracelet and hoodie with t-shirt!

December 4: A Celebration of Books || Elisa - My reviews and Ramblings
Posted by Diverse Reader at 5:09 AM