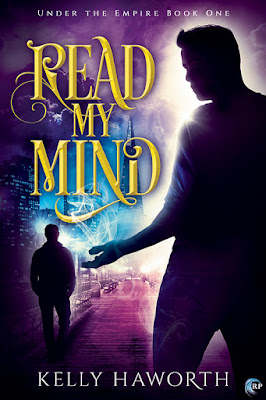 
Scott Kensington lives happily without magic; prayer is all he needs to worship the gods. Then he starts his studies at the University of Frannesburg, and not only is he suddenly surrounded by eccentrics—those gifted with magic—but his own latent ability begins to surface, with consequences that could tear his soul and family apart.


Nick Barns is grieving for his lost mother and desperate for distraction—usually in the form of limited-edition action figures. As a telekinetic, he’s no stranger to magic, so he offers to help Scott adjust to his new powers. They quickly learn how their magics interact, their shared passions soon growing beyond superheroes and immortals. But Nick’s not taking his studies seriously, and his father threatens to pull him from the university. Overwhelmed by his own crumbling family, Scott’s convinced he can’t handle a relationship, but he doesn’t want to let Nick go.


With grief, guilt, and magic complicating everything between Nick and Scott, it seems that not even the gods—or a new comic book—can save their relationship now.
Sometimes, even reading someone’s mind won’t help you understand what they want.

Welcome to the blog tour of Read My Mind, the first book of the Under the Empire series! I hope you’ll check out all the stops, where I explore the craft that goes into creating a fantasy series set in a contemporary era.


Long ago, a pantheon of ten gods gifted magic to the people of our world, changing the course of history as we know it. The Flavian Empire now reigns over what would have been America, led by a royalty of fire weavers. Frannesburg, the city by the bay, is a haven from the empire’s encroaching dictatorship, and its university is bustling with people of all magics, sexualities, genders, and races. As students study toward their degrees, they hope to find friendships across majors, and maybe even love under the fog and city lights.


Read My Mind follows two freshmen, Scott and Nick, who have just started at the University of Frannesburg. Magic, attraction, and too much homework await them on their journey to figure out who they are now that they are on their own, and how they fit into this magical world.

Kelly Haworth grew up in San Francisco and has been reading science fiction and fantasy classics since she was a kid. She has way too active an imagination, thus she channels it into writing. Kelly is genderfluid and pansexual, and loves to write LGBTQIA characters into her work. In fact, she doesn’t know if she’s ever going to be able to write an allo-cishet couple again. Kelly has degrees in both genetics and psychology, and works as a project manager at a genetics lab. When not working or writing, she can be found wrangling her two toddlers, working on cosplay, or curled up on the couch with a good TV show or book.

To celebrate the release of Read My Mind, one lucky winner will receive a $20 Riptide gift card! Leave a comment with your contact info to enter the contest. Entries close at midnight, Eastern time, on October 7, 2017. Contest is NOT restricted to U.S. entries. Thanks for following the tour, and don’t forget to leave your contact info!