Blog Tour: The Long Past and Other Stories by Ginn Hale ~ Exclusive Excerpt 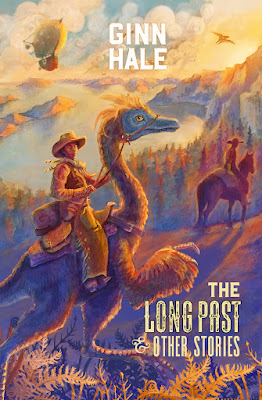 Title: The Long Past and Other Stories

1858 –Warring mages open up a vast inland sea that splits the United States in two. With the floodwaters come creatures from a long distant past. What seems like the End Times forges a new era of heroes and heroines who challenge tradition, law, and even death as they transform the old west into a new world.

In the heart of dinosaur country a laconic trapper and a veteran mage risk treason to undertake a secret mission.

A brilliant magician and her beautiful assistant light up stages with the latest automaton, but the secrets both of them are hiding test their trust in each other and pit them against one of the most powerful men in the world.

At the wild edge of the Inland Sea, amidst crocodiles and triceratops, an impoverished young man and a Pinkerton Detective must join forces to outmaneuver a corrupt judge and his gunmen.


Dalfon looked a little self-conscious but then smiled.


“I don’t much like admitting it, but I’d taken something of a beating. Though you can bet the bellhop at the Castle was pretty impressed when I claimed I’d come by my bruises and split lip wrestling a tornado out of my way.”


Lucky felt sure Dalfon was right, but that still didn’t answer his question. He couldn’t have been roughed up by Killer Curtis. The outlaw hadn’t even pulled his gun when Dalfon had shot him down. Everyone said so.


“Did Curtis’s brother come after you?” Lucky asked.


“Jimmy? No. He took off the minute Curtis hit the ground, and as far as I know he’s still running.” Dalfon sighed. “It was Pa Spivey and two of his friends. They came after me behind the saloon.”


“Pa?” Lucky couldn’t imagine Pa Spivey had taken offense at seeing a murderer like Killer Curtis meet his end. “Why?”


“Why do you think? You followed me around like a second shadow and were always giving me those hungry looks—”


“I didn’t!” Lucky felt a guilty flush spread across his face. Sure, he’d trailed Dalfon, but he hadn’t been as obvious about it as a lot of the girls or even Mrs. Margot Swaim.


“Yes, you did.” Oddly, Dalfon laughed. Then he rolled up onto one elbow. “And so did I, all right! I was just as caught up as you were. Probably more so, because what the hell was I doing hanging around a dismal swamp town for months for except to be with you?


“So of course Pa Spivey got suspicious and started spying on us. When he jumped me, I knew the only choices I had were either to shoot him dead or get the hell out of town. I wasn’t about to murder your pa—adopted or not. So…so, I left you. But I gave Effie a letter for you first. I swear I did.”


Lucky nodded. Three years he’d been so angry and hurt, and all that time Dalfon had probably been feeling the same for being stood up at the hotel.


“What did you do when I didn’t show in Chicago?” Lucky asked.


“I waited. Kept hoping you’d come.” Dalfon shook his head. “After three weeks I couldn’t afford to stay any longer. I figured you feared that we wouldn’t be able to make lives for ourselves. That I wasn’t a reliable man to risk so much on. Then I reckoned that you were probably right.”


“But I didn’t think anything of the sort,” Lucky protested.


“Well, I realize that now.” Dalfon laughed, then went on. “But at the time it made me reconsider the life I’d been leading. Living by my gun, constantly on the road hunting bounties for anyone who could pay. I wasn’t much better than the outlaws I took down, was I?”


Lucky thought he had been. Better than a lot of the respectable men of Edgewater too. Certainly better than the Swaim brothers. But saying as much would just make him sound foolish, he supposed.


“What’d you decide then?” Lucky asked.


“I realized that I had to actually make good on those changes I’d promised to make in the letter you never read.” Dalfon gave another dry laugh, then reached into his coat and drew out a star-shaped badge. “I had to find a lawful way to provide for and protect us both. Then come back and give you a better offer.”


Dalfon handed the silver badge to Lucky. It felt heavy and warm in his hand. A halo of square letters surrounded the star and proclaimed the bearer to be a detective in the Pinkerton Agency as well as a licensed theurgist.


“I worked my ass off for that,” Dalfon said. 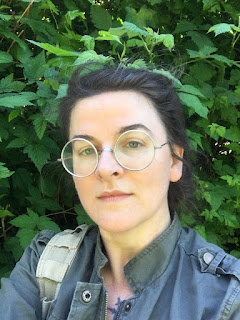 Award-winning author Ginn Hale lives in the Pacific Northwest with her lovely wife and their ancient, evil cat. She spends the rainy days admiring local fungi. The stormy nights, she spends writing science-fiction and fantasy stories featuring LGBT protagonists. (Attempts to convince the cat to be less evil have been largely abandoned.)
Connect with Ginn: Twitter  |  Facebook  |  Instagram  |  Author Site