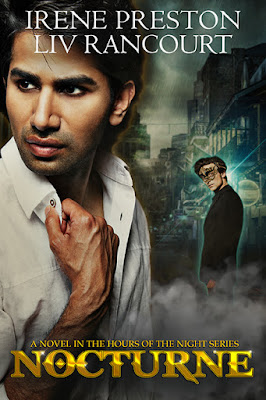 ⚜It's Mardi Gras, cher, but this year le bon temps kick off with murder…

For generations, the White Monks have treated the vampire Thaddeus Dupont as a weapon in their battle against demons. However, when a prominent matron drops dead at a party, Thaddeus and his lover Sarasija are asked to find her killer. Their investigation leads them to an old southern family with connections everywhere: Louisiana politics, big business, the Church, and an organization just as secret as the White Monks.

Meanwhile, an esoteric text containing spells for demon-summoning has disappeared, Thaddeus is losing control of le monstre, and Sara is troubled by disturbing dreams. These nightmares could be a side-effect of dating a vampire, or they could be a remnant of his brush with evil. As the nights wear on, Sara fears they are a manifestation of something darker – a secret that could destroy his relationship with Thaddeus. 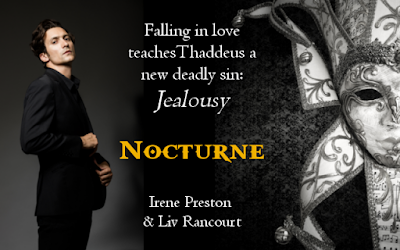 Thanks so much for having Irene and me back on the blog, Meredith! This whole week has been a whirl of activity, getting ready for Nocturne’s release.
And it’s HERE!
Irene and I both felt like Nocturne is the first true sequel either of us has published. Vespers, the first book in our Hours of the Night series, was so much fun to write. Our holiday novella, Bonfire, was more-or-less an extension of Vespers, though we deliberately didn’t pick up any of the plot strings we’d left hanging, mostly because we wanted to focus on the relationship between Thaddeus and Sara. And, you know, Christmas.
But with Nocturne, we needed to move forward on a number of different story arcs. For me, the hard part was finding a balance so that different threads were given attention without making the whole book about any one of them. We also struggled with weaving in the events that took place in the previous books in a way that would allow readers who’d only read Nocturne to have a good experience, without boring people who’d read them all.
Thank God for our editor, is all I have to say on that!
I asked Irene how she felt about writing the sequel, and here’s what she said…
I love being in Thad and Sara’s world, so I’m always excited to return there. In just two novels and a novella, though, it’s insane how much we already have to go back and look up. We’ve started a timeline we jot stuff down on. And there keep being questions like, did the First Street house have a library?
Heh. Yeah, the question about the First Street house and its library only became important after I’d set three or four scenes there….then figured out there was no library in the Vespers version of the house. This is where Irene really earns her stars as a co-writer. She’s much more detail-oriented than I am. We swap scenes back and forth, and after I read what she’s written, I write what comes into my head.
Then she messages me with comments like, “um…that scene you started outside? They were in the house when my part ended.”
Oops.
She calls herself the “co-writer from Hell” but nothing could be further from the truth. In reality, we balance each other out, and we each bring something unique to the Hours of the Night novels. The books benefit from our different perspectives and skills, and I’m pretty sure Nocturne lives up to the standard we set with Vespers.
Keep reading, because we’ve got an excerpt and a rafflecopter giveaway. Someone’s going to win a $25 gift card! We put all of the Hours of the Night books on sale for Nocturne’s preorder, and I’m not quite sure when the prices are going to go back up, so click over quick! Happy reading! 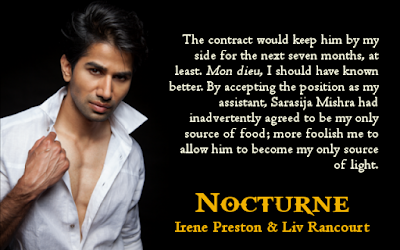 a Rafflecopter giveaway
Posted by Diverse Reader at 4:02 PM