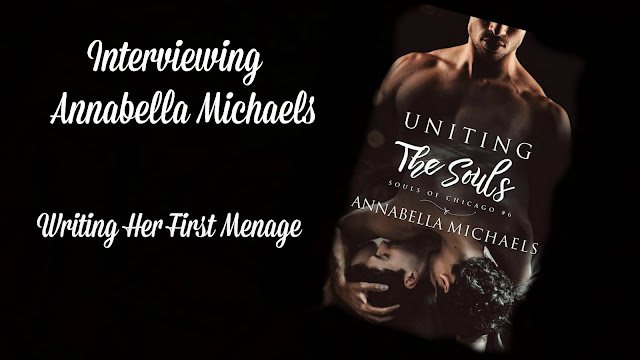 It’s exciting to have Annabella Michaels here on Diverse Reader today. She’s only days away from releasing her very first ménage which is thrilling! I was lucky enough to already read it and as a fan of MMM it’s a must read.

Now, because this is this authors first go at the triad love thing, some readers may have concerns. Questions of their own perhaps. Like I said, I’ve read it and today we are hopefully going to put minds at ease and at the same time introduce you to these three characters that are sure to steal your hearts!

Hello, Annabella, thanks for being here. First, let’s talk about the series. This is the last book in it. How are you holding up with saying goodbye to this world?

Thank you for having me. It’s been an emotional experience, winding down the series. These guys and the Greene family have been my heart and soul over the last year so that’s difficult to let go of, but I know we’ll get to see them here and there in the future.

Uniting the Souls is your very first ménage. I have to know, was it hard with the parts and placement to write these three?

I thought it might be, but as usual, my characters were the ones telling the story, so I let them lead me. They knew exactly how they wanted things to go and I think it worked out to everyone’s satisfaction. LOL

Tell us about the three characters a bit. Hudson, Matt, and Isaac?

Oh, these three guys stole my heart. Hudson is very level-headed, kind and compassionate. He knows what he wants and he’s not afraid to go for it. Isaac, despite his past is open, affectionate and trusting. He wants to love and be loved. Matt has had his own rough road he’s traveled, but he is still caring and honest and would give anyone the shirt off his back.

Each backstory tugs at your heart. I cried a lot. Which backstory would you say was the hardest, emotionally, to write?

That’s tough because they were emotional in different ways, but I would have to say Isaac’s story. I was a complete wreck after writing that part. I hope readers feel the same level of connection that I did to him.

Jealousy is a huge worry for readers in ménage. Rightly so. One way you combated this was you had these three coming together at once. Why did you choose to go at it from that angle?

Honestly, I wrote the story that my guys told me to write and there was simply no room for feelings of jealousy, cheating or being left out. Despite age differences, race differences and their individual backgrounds, these three men found a common ground and a mutual respect and love for each other, which is exactly how love should be, with no judgement and no barriers. They found something very special with each other and they weren’t going to risk it over petty things.

There’s no doubt, quickly, that physical connection was not going to be an issue with these three. But you tackled the psychology of it brilliantly. And not to say there wasn’t serious psychology but you treated it like it was the most important element. Do you feel that way and why?

I love writing sex scenes, I have a lot of fun with them, but for me, the most important part of the story is the connection between the characters. The things that are said between them, the way they treat each other outside the bedroom is what makes the intimate moments that much better.

Why did you choose a ménage relationship for these characters over the one on one relationships the others had?

I chose to write this one as a ménage for a couple of different reasons. First, ménage is one of my favorite things to read. I love the delicate balance, the give and take that members of a triad experience. So, of course, I wanted to try my hand at writing one.

Second, I had been planning since the very first book that Matt and Isaac would have their own story at the end of the series. It wasn’t until I was writing Renewing the Soul and introduced Hudson that I fell in love with him as well and wanted to write his story. The three of them together was an idea they put in my head and they wouldn’t let up until I agreed to write their story. I know this probably sounds crazy to most people, but that’s truly how it happens for me.

Personally, I don’t agree with that at all. Each relationship is as unique as it’s individuals and that’s a wonderful thing. What works for one person, may not work for another, but that doesn’t make one more right than the other. Whether it’s two men, two women, a man and a woman or more than two members in a relationship, I think we should just celebrate the fact that these people were able to find love in a world that’s so often filled with hate and fear.

Using one word each. Tell us what each of these characters bring to their triad relationship?

What do you want your readers to take away from this book?

I hope readers take away the knowledge that love in all its various forms is an amazing thing to get to experience and that if you find it, you should hold onto it with everything you’ve got.

Why do Hudson, Isaac, and Matt work so well in your opinion?

I think it’s because they are all amazingly, compassionate men. None of them came into their relationship with an ego. They all had one common goal in mind and that was to love each other to the best of their abilities.

Finally, what is one thing you want to say to your readers who are hesitant to buy this book?

I want them to know that if they are hesitant because they don’t like to read about cheating or jealousy or they’re worried about a new person joining an already established couple, this story is none of those things. These three men came into this relationship at the same time, each of them new to triad relationships and learning what that meant together. The issues they face are from the outside and they deal with them together. This story has the same love and devotion and Greene family support that the rest of my series has had and I hope everyone will give it a chance.

Thank you so much, Annabella! It was wonderful speaking with you. As I’ve already read this book I am encouraging every fan of this series or ménage to grab it!

Thank you so much. It was a pleasure to talk with you about Uniting the Souls.

Currently, it's up for preorder!!! 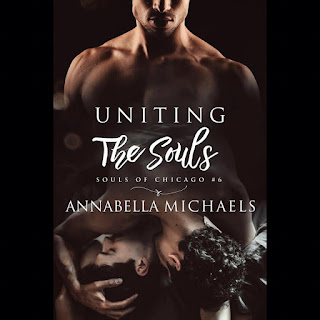 Posted by Diverse Reader at 5:06 AM