Today is that time of the week where I sit down with an author, talk with them, show you their work, and then they give you things! Yes, it's Author Saturday Spotlight time!

This week we have someone who been writing in this genre for awhile. His work is beyond creative and he's so very talented. It's wonderful to have author Hank Edwards here today.

Grab your coffee or whatever, get comfortable and enjoy! 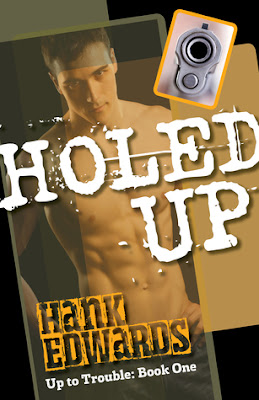 FBI Special Agent Aaron Pearce, tall, muscular, a lone wolf with an attitude, is assigned to protect Mark Beecher, a witness to the plans for a terrorist attack. The discovery of an unknown informant within the FBI's ranks, however, forces the two men to hole up in a loft apartment with only one another for company.


After long conversations and their shared attempt to unravel the puzzle of the terrorist group's next target, Pearce and Mark find they cannot deny their mutual attraction. Pearce gives in to his passion, sleeping with the man he's sworn to protect and going against his training as he risks heartbreak once again.


When the informant reveals himself to Pearce and takes him hostage, Mark finds he cannot run and leave Pearce to die. Instead, their roles have been reversed and now he is the only person who can save Special Agent Pearce. 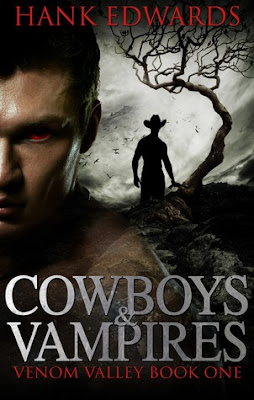 In the frontier town of Belkin’s Pass, as a vampire quietly feeds on the local saloon girls and their customers, a tragedy teaches resident Josh Stanton he has the ability to raise the dead. Knowing he is now a wanted man, Josh flees into the arid plains of Venom Valley. Pursued by Dex, the town deputy and Josh’s best friend, the two realize their friendship is truly something deeper, and Dex has to decide if he’s a man of the law, or a man in love. The vampire, drawn by Josh’s power, circles ever closer, gathering his forces against them. 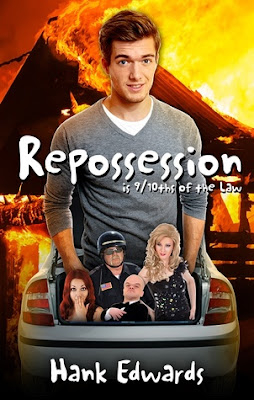 Repossession is 9/10th of the Law

Alan Baxter barely scrapes by working as a deejay in suburban Detroit. To make ends meet, he takes a job as an automobile repossession agent, and discovers his very first assignment is a car owned by his drug dealer ex-boyfriend. On top of that, a body is discovered in the trunk…by a cop. Soon Alan’s life is completely upturned as he is pulled into a mystery involving more bodies, a highly lethal new street drug, a mysterious man with a top hat and cane, raging dwarves, a house fire, a cranky police detective, and his even crankier cat! 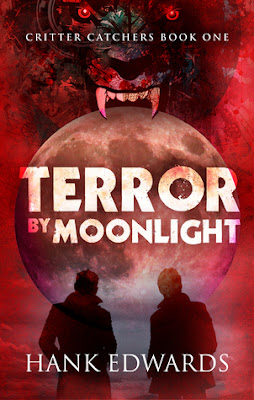 Cody Bower and Demetrius Singleton have been friends for over twenty years even though they are polar opposites. Cody is tall, handsome, athletic, and straight, and Demetrius is average height, more of a thinker, and gay. They have started an animal control business together and have to figure out how to be business partners without letting it affect their friendship, but that’s the least of their problems. When one of their first clients ends up brutally murdered in what appears to be an animal attack, the two realize something big and dangerous is stalking their tiny town of Parson’s Hollow, and it’s up to them to catch it before it kills again.

Thank you, Hank, for being here today and talking with me. It’s truly a pleasure. You’ve been writing in and for the LGBTQA+ community for a while so you know the ins and outs. I can’t wait to pick your brain.


How has this genre changed since you started writing in it up to now?


Your Fluffers Inc series is comedy. It’s the type of series that you read to smile and laugh and share with others. Is there a series you’ve read that is a go to, to feel good for you?


I really love Josh Lanyon's Adrien English series. And I've read Armistead Maupin's Tales of the City series more times than I can count. Outside of gay fiction, I really love Harry Potter, the Stephanie Plum series by Janet Evanovich, the John Corey series by Nelson DeMille, and the Prey series by John Sandford.


What are three things about yourself that one would not know after reading your bio?


I have a fear of heights, but not really afraid to look out the window when I'm on a plane. No idea what that is about.


I'm a strange mix of a doer and a procrastinator.


I usually have a mental outline of how a story will go, but then a character does something surprising and it takes off in a new and exciting direction.


I’m told this is the worst question to ask an author but I love asking it. Of all your series which would you love to see on TV and how would you cast your characters?


Gah! This is a tough question! I would love to see Venom Valley on TV… just imagine what they could do with it! But I've always had an inkling that my Fluffers, Inc. Series would be awesome on a channel like HBO or Showtime. I just got the rights back for all three books, and have always wanted to do some updates to Charlie's story, so the books are currently unavailable on Kindle while I work on them in between writing the new stories. I hope to re-release them soon with fresh new covers. And casting? Jeez … that's a tough one. Here are the main characters from the first book and who I think would fit the bill.


Charlie Heggensford - Cole Sprouse. He plays Jughead on Riverdale, and he's adorable! He's a couple years older than Charlie, but he's got the humor skills and full lips. :)


Rock Harding - Zac Efron would make a great Rock. That furry torso, woof! If Zac wouldn't do it, I think Joe Manganiello would do quite nicely, as long as he stopped waxing.


Kinitia Jones - Danai Gurira from the Walking Dead. She's got the sass and the strength to play her off the charts!


Cedric Wilmington - He's so catty and outlandish, I would love to see Titus Burgess from Unbreakable Kimmy Schmidt unleash the full power of his personality on this role. OMG, LOL!


Billy Ransom - Robbie Fowler. He's a red-head, which I never really consider for Billy, but he's got that look of boyish innocence with a spark of mischief.


Can you tell us what you’re currently working on or future works?


My current WIP is book four of the Critter Catchers series, tentatively titled "The Devil of Pinesville," which I hope to release later this year. Critter Catchers is a humorous paranormal series about two best friends, one gay and one straight, who open an animal control business together in their small hometown in western Pennsylvania. They get involved in paranormal creatures cases, and along the way deeper feelings than friendship may develop.


On December 26 of this year, the fourth book of my Town of Superstition young adult fantasy gay romance series, published under the pen name R. G. Thomas by Harmony Ink Press, will be available.


I have plans for other books next year, but don't want to say what they are yet. I have a day job that takes a good chunk of my time so I can't write as fast as I'd like, and I don't want to make any promises I might not be able to keep. :)


Are you attending GRL this year or are there conventions fans will be able to hunt you down at next year?


I will not be able to attend GRL this year, unfortunately, and it's the first time in five years I won't be able to go, it just wasn't in the budget. I am scheduled to attend the Coastal Magic Convention in Daytona Beach in February, and I hope to be able to get back to GRL in 2018.


When writing a book, what part is the most important for you? That part you want the reader to sort of connect with you on?


I would hope the reader would find one character they can identify with, and want to see come out, if not happy, then at least in a different place than he started. I try to sprinkle a bit of humor throughout my stories, no matter the subject, and I would hope that sparks a reaction.


Website: It's a work in progress, but has the majority of my books listed and buy links: http://hankedwardsbooks.blogspot.com/


My YA site can be found at www.townofsuperstition.com


Cats! We have 2 of them. I do love dogs though, just don't have the yard for one.


Oh, so many. Tootsie is amazing and my go to movie to make me laugh.


I love action movies, but comedy is a big draw for me.


Thanksgiving! All the food with very little of the gift-giving stress.


I've found a table in a hallway at work where I sit and write during my lunch hour. But my favorite place has to be the desk in my office at home.


Thank you, Hank, for talking with me. It’s been fun :D


Thank you! I loved the questions and the chance to share with you and your readers. :)

Hank will be gifting one person an ebook copy
of his book Terror by Moonlight
Please enter the rafflecopter below!
Contest will end September 29th

A huge thank you to Hank for hanging out with us today!