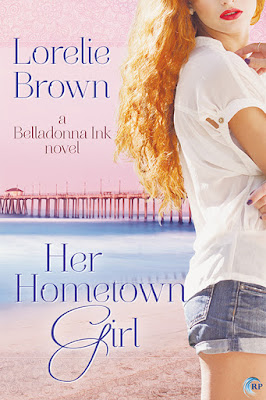 
I had doubts before the Big Day—doesn’t everyone?—but I didn’t expect to find my fiancée banging the caterer’s assistant right before the ceremony. Especially because he’s a guy. And we’re lesbians. The proper sort of Southern Californian lesbians who invest in hedge funds and wear bedazzled wedding dresses and wouldn’t be caught dead in a Subaru.


So I’m determined to be as much of myself as I can manage. Dating my tattoo artist? I’m in. Cai is smart, sexy, and mysterious. Exactly what I need for a rebound. She keeps herself guarded, but I understand—I’m holding on to secrets too. The kind of secrets that make a girl want to run home to Mom, even if home is Idaho. Maybe especially then. I just didn’t expect Cai to come with me.


I wonder what it would take to get her to stay forever.

Here’s a thing you may not know about me: I love podcasts. I have a day job that isn’t always the most demanding, and sometimes I have to do things like input data from one source to another. Print and collate a lot of documents. Things that keep me occupied but don’t exactly keep me engaged. That’s where podcasts come in. They save my sanity and keep my brain clicking along when I’m clipping together stacks of 50 registration forms.

So with no further ado, here’s my current favorite podcasts:

1.     My Favorite Murder. I know that’s a really morbid title, and yeah, it’s all about murder and crime, but believe me when I tell you that it’s also really freaking funny. Georgia Hardstark and Karen Kilgariff take turns telling each other true crime stories. Some times it’s about a serial killer, sometimes it’s a survival story. Try not to take things too literally—Georgia and Karen aren’t always super detailed research. They have a great connection and have a lot of fun basically talking bullshit. I’d give anything to go get drinks with them. Favorite episode: #45, Funky Diva, where they cover the Earl of Lucan, who killed his wife & disappeared.
2.     The Dollop. Dave Anthony tells a story from US History to his friend, Gary—no, Gareth Reynolds. They’re both stand up comedians. Somehow Gareth knows pretty much nothing about history. He grew up in Wisconsin, not far from where I live now, but I don’t know. Maybe he slept through history class? Maybe he was high? He missed everything, which makes his reactions pretty hilarious. Favorite episode: #137, Phineas Gage, a guy who walked around with a hole in his head. Literally. For years.
3.     The Lesbian Collective. These four women of color have great chemistry and an obvious friendship. I love the L of the week feature. They’re funny as hell and I never fail to laugh when listening to them. The only thing I don’t love? Their sound mixing. Or microphones. I’m not sure exactly what it is, but they get loud sometimes (which is great, because enthusiasm is hella awesome) but then it’s like they get just a little distorted or something. I can’t always understand Stoney G when she gets going. Favorite episode: Majestic Strap On. Because duh.
4.     Dear Prudence. I have a thing for advice columns (I also read Captain Awkward on a regular basis) and Dear Prudence used to be a bastion of rape culture and old-school-ness. Not anymore! In late 2015, Mallory Ortberg took over from the previous Prudence. Mallory co-founded the late, great The Toast website and she hands out well-rounded, modern advice with more compassion than I’ve ever dreamed of having. Between you and me, I’m nursing a teeny bit of a crush on her. Favorite episode: April 25, 2017’s “Hardly Working” edition. The only thing better than Mallory is Mallory with Ashley C. Ford.
5.     Crimetown. Season one was a long form delve into the crime and corruption history of Providence, Rhode Island. Yeah, seriously. Providence was (is?) apparently a hotbed of mob activity. Chicago and New York ain’t got nothin’ on this burg. Favorite epsidoe: #7, where the mayor assaults a man in his living room, but you really ought to start on episode 1, or it won’t make any sense.
6.     You Must Remember This. I love Old Hollywood. The bustling magic of the silent era, the transition into pre-code talkies (do you know how dirty those movies were?), and I even love the weird and manipulative world of the Studio System. Karina Longworth researches it all, delving into the sordid, forgotten history that Hollywood would hide if it could. Favorite episodes: #98-100. A three-part mini-series on Marilyn Monroe, part of the larger Dead Blondes season that really changed how I viewed iconic Marilyn.

See also: Stranglers, Stuff You Didn’t Learn in History Class, Criminal, Reply All, Mogul, and The Recovery Show, but this is probably enough for now. Have you given podcasts a try? Are there any I didn’t mention that you think I should check out?

About the Belladonna Ink Universe


Belladonna Ink is the hottest female-centric tattoo parlor in Southern California. It doesn’t matter if you’re cis, trans, het, gay, or spectrum, our host of female tattoo artists will give you beautiful ink, personally designed. We don’t believe in paint-by-number drawings—you’re worth more than that. Give us a chance and we’ll help you find the meaning in your personal scribbles, and turn your skin into our professional canvas.


Just one thing: it’s really weird, but all our friends and some of our artists keep falling in love. Maybe it’s something in the ink.


Check out Belladonna Ink! On Riptide


After a seminomadic childhood throughout California, Lorelie Brown spent high school in Orange County before joining the US Army. After traveling the world from South Korea to Italy, she now lives north of Chicago. She writes her Pacific Blue series of hot surfers in order to channel some warmth.


Lorelie has three active sons, two yappy dogs, and a cat who cusses her out on a regular basis for not petting him enough.

To celebrate the release of Her Hometown Girl, one lucky winner will receive a bottle of Macallan single malt whisky! Contest IS restricted to both US entries and to those over the age of 21. Leave a comment with your contact info to enter the contest. Entries close at midnight, Eastern time, on September 9, 2017. Thanks for following the tour, and don’t forget to leave your contact info!