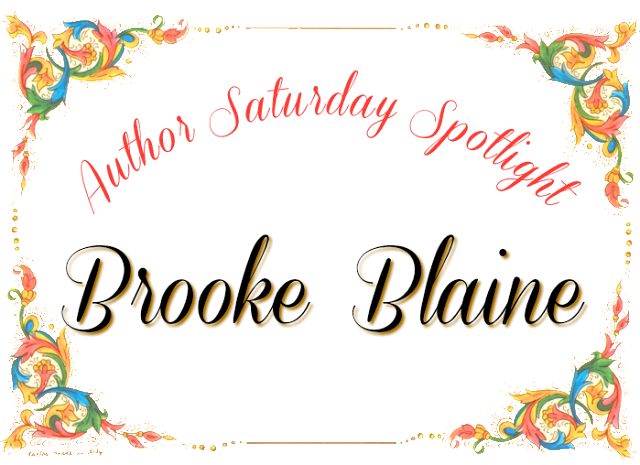 Happy Saturday!!!! Author Saturday Spotlight Day. Today we have the wickedly talented Brooke Blaine here today talking with us and showing off some of her amazing work. She will be giving away a signed paperback so be sure to stick around for that. Grab your beverage of choice and get comfy. 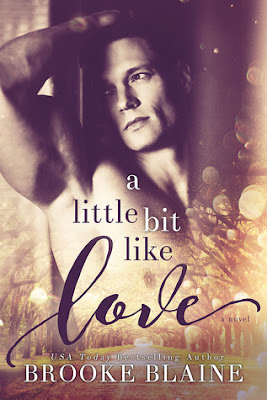 What if you had everything in the world you wanted…except the man you’d left behind?

Jackson Davenport, the charismatic, strait-laced heir to the Davenport fortune, has a secret. One he’s been hiding since he graduated from South Haven all-boys academy—and that secret’s name is Lucas.

When a work trip takes Jackson back to his old stomping grounds, memories of the year he shared with Lucas come crashing to the surface. With growing pressure from his father to settle down and take over the family business, Jackson knows he’s on borrowed time, and sets out to find the free-spirited daredevil he once knew.

But Lucas isn’t the same man he was eight years ago.

One night. A shattered heart. And an endless parade of nameless faces. Lucas Sullivan is South Haven’s ultimate playboy, a reputation he’s honed since the only boy he ever loved left without a trace. To the world, he’s brash and confident, an in-demand artist who spends his days designing one-of-a-kind pieces and his nights as king of the downtown scene.

Many have tried and failed to get past the barrier he’s carefully constructed, but it’s the shy, studious boy he once coaxed out of his shell who still haunts him. 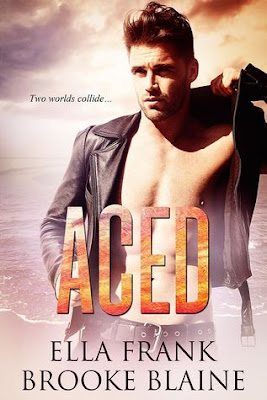 What happens when these two worlds collide?

Ace Locke is Hollywood’s hottest action hero. Women across the globe fling their panties in his direction, but Ace isn’t interested in those—he’s more of a boxer briefs kind of guy. Specifically, those of the nearly naked male model on a billboard he drives past every day.

Though he recently made headlines for his public coming out, Ace is wary about pursuing a relationship, fearing what the court of public opinion will do to his career. But there’s something in the model’s expression that intrigues him and has him wondering what if?

Dylan Prescott just scored his biggest modeling campaign yet. One that has him plastered all over L.A. in not much more than what he was born with. And when he’s cast in Ace’s latest blockbuster, it puts him in close proximity to his ultimate fantasy.

Outwardly confident, Dylan has no problem with his sexuality or his pretty-boy looks, and uses both to his advantage to get what he wants. And what he wants is the impossible—Ace Locke. 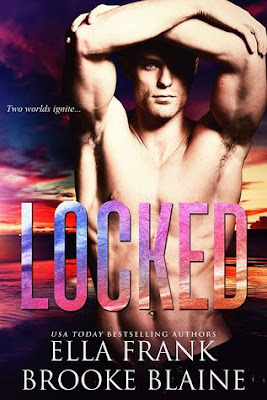 “ACE LOCKE JETS OFF TO SIN CITY WITH MYSTERY MAN”

The man on Locke’s arm has been identified as Dylan Prescott, the sexy new “it” model currently featured in the latest Calvin Klein ads. Sources tell TNZ the men met on the set of Locke’s upcoming action film Insurrection 2, and that “they only have eyes for each other.”
This is the first public gay relationship for Locke, who came out a year ago, and there has been much speculation on who would finally be the one to catch his eye.

According to multiple eyewitnesses, Locke whisked Prescott away on his private jet for a romantic weekend at Syn, the most exclusive hotel on the Las Vegas Strip. After pictures recently surfaced of the new couple, affectionately named PresLocke, it appears from the possessive way Locke keeps his new beau close that things are heating up.

The world is watching #PresLocke, and we’ll be sure to keep you up to date on this budding relationship!

Ace and Dylan’s story continues in Book Two of the Bestselling PresLocke Series.

Thank you, Brooke, for being here today and talking with me. Your books are so loved and to speak with you and get to know how you tick is awesome.

Thank you so much for having me! You sure you want to know what makes me tick, though? Might be scary in my brain…

I was always that kid with her nose in a book, even waking up at three or four in the morning to read for a few hours before school started. My imagination ran wild, and I always had a notebook on me to flesh out ideas that came to mind. The only problem was, I’d never get very far. After writing out a complete backstory and a couple of chapters, a shiny new idea would set in, and honestly, it never actually occurred to me to write a book. I just wanted to daydream the stories and put myself in them. It wasn’t until I started writing reviews in 2011, and then working behind the scenes with Ella Frank as her critique partner, that I realized this magical world of books was accessible and that maybe, just maybe, it was a world I could inhabit.

That’s also about the time I began reading LGBT novels, but my journey into writing in it came when a certain closeted actor, Ace Locke, tried to take over one of my M/F romantic comedies, Hooker. I couldn’t get his story out of my head, and when the romcom came out, that’s the one thing I kept seeing over and over—people asking for Ace’s story. Something about him just called to me, and I needed him to get his happily ever after. Ace’s book turned into a fun collaboration, and it’s just continued from there with the subsequent novels in the Preslocke series, and now my own solo M/M romance novel, A Little Bit Like Love. I adore this community that has been so generous and welcomed me with open arms. I hope to continue creating new worlds here for many years to come.

You have co-authored with Ella Frank often, written alone, and done anthologies. How are each different and do you have a preferred one?

I love it all! Working with Ella is always so much fun, because her brain is so damn amazing (and naughty! Don’t let her tell you otherwise). When we write together, we Skype and watch as the other takes a paragraph, a page, whatever, and then we tag out, and the whole time we’re throwing out ideas or lines. We’ve been told it’s an odd way to work (LOL), but it works for us, maybe because we work so closely on each other’s novels. I’d say it’s probably easier to write together—definitely faster, because she keeps me on my toes aaaand she’s watching me. Ohhh, the pressure! It’s great to be able to switch off and do a solo book and then a co-authored novel. I can’t see that changing any time soon.

Choose one of your books to be on the big screen and cast it! GO!

You have to know this is the most dreaded question we get asked, right? How do we choose between book babies? Ahhh!! My characters will all slap me now, so thanks for that. Okay, let’s go with Licked for a TV series because those women are so fun and sassy, and HELLO, give me all the ice cream. For the big screen, I’d go with Aced—he IS an actor, after all, and I find behind the scenes the best part of a movie. As far as actors go…no clue. I don’t usually have muses for my books. I’d rather leave that up to the readers. I know, I’m no fun!

Are there any other authors you’d love to work with?

As a co-author? Unless Richelle Mead comes knocking, probably not. But I’d love to work together with authors I admire and respect on different projects, anthologies, etc. But in a co-author capacity, I can’t see it happening.

How do you decompress after you finish a book?

Um… I start writing the next one. No rest for the wicked. ;) I keep telling myself I need to celebrate such a big accomplishment and take a breather, but because this is my job, I find it hard to turn everything off. There’s always something that needs to be done, so I feel guilty if I’m not staying productive. And, yes, I’m aware I need more balance in my life. LOL. I’ve got two signings this year that fall back to back weekends in Orlando and Las Vegas in October, so I’m telling myself that I won’t have to work for at least ten days if I can hit my deadline before I leave. We’ll see how that goes…  ~fingers crossed~

If there was one place you could travel for research where would you go?

Oh gosh, I want to travel everywhere. I’m so excited to visit Australia next year, and I have no doubt I’ll leave with some ideas. Croatia looks dreamy, so I might have to say there too. Open to suggestions!

I’m most active on Facebook in the reader group I share with Ella called The Naughty Umbrella (our happy place!), as well as The M/M Daily Grind group, which features an incredible set of M/M authors that I’m honored to be a part of. I’m horrible at Twitter, but I do enjoy Instagram. Snapchat? Forget about it. I use it to swap videos with my niece. LOL

I’m currently working on book two in my South Haven series, A Little Bit Like Desire, which will release this fall. Each book in this series is a standalone and revolves around a different couple, and I’m so excited to write Shaw’s story! He’s definitely the sexiest one in the bunch. ;) Ella and I will also be collaborating again in the next few months, and we’re narrowing down our list of ideas now. So many stories, so little time!

Chocolate or vanilla? Chocolate everything except ice cream. I’ll take vanilla for that.
Cats or dogs? Cats! My kitteh, Jax, is the best not-so-little demon ever.
Favorite comfort food? Mexican cheese dip and salsa
Favorite color? It’s always been red, but I feel like it’s morphing into hot pink…WHO AM I?!
Best dancing song? I’m so hooked on Taylor Swift’s new stuff.
Superhero or villain? Villain! Maleficent for the win.

Thank you again for talking with me and I look forward to more wonderful books!

Enter the giveaway to win a signed paperback of Brooke Blaine's book
A Little Bit Like Love. This is an INTERNATIONAL giveaway.
Contest will end on September 22nd.

I want to thank Brooke for being here today and being so delightful!

a Rafflecopter giveaway
Posted by Diverse Reader at 6:08 AM