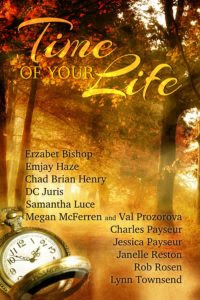 The Time of Your Life might slip away if you don’t watch out! Tales from deep space, the open road, reality television, fantasy-academia, and contemporary life are brought together in this collection. In Jessica Payseur’s Orbits, longtime friends-with-benefits meet unexpectedly on a space station and finally sync their technology. Warren’s Peace by Emjay Haze, Duet by Megan McFerren and Val Prozorova, and A Change is Gonna Come by Rob Rosen take the reader on the road—via a Caribbean cruise ship, the railway system of France, and the California Interstate, respectively. A happy home is the goal, but when Chad Brian Henry gives two happily married men constant drooling and barking in the form of A Problem Called Travis, they unhappily realize their aim may not be as true as they thought. Two authors invite us to weddings! Erzabet Bishop and Lynn Townsend each use humor and surprise, found in the commonplace, to lead newlywed wives in First Night and two grooms-to-be in Wedding March toward discovering and remembering why they went to all this trouble in the first place. The Color of Magic, by Charles Payseur, lets us watch and learn with three university students, who challenge authority to secure the future. In a more typical college setting, a shy roommate and an outgoing roommate delight each other with A Taste of What’s to Come, written by Samantha Luce. Straight off the small screen, Food Play Extreme, by Janelle Reston, serves a platter of competition and confidence to three top chefs. And in D.C. Juris’ A Good Bargain, age and experience is indeed a good match for youth and beauty. Don’t ignore the ticking of that clock—it’s the time of your life!

From “A Problem Called Travis” by Chad Brian Henry Travis barked. It was a high-pitched yip that grated on Brian’s nerves. The honeymoon was over. The dog was pissing him off. “No!” Brian screamed and stomped off to the kitchen. Travis followed, prancing at his heels and barking in frustration. He set the plate on the counter a little harder than he meant to, too angry to bother eating while standing at the counter like a fool because a pushy, stubborn ten-pound lump of fur wasn’t satisfied with his own food. Leaving Travis to harass the kitchen island, Brian sat back on the couch colorfully mumbling to himself. He only had one day a week off from the shop most of the time, and he just wanted to enjoy a little me time without having to constantly monitor the brat. It wasn’t just the food. It was the accumulation of tiny frustrations that built up until Brian wanted to shove the mongrel into a sack full of rocks and toss it in the lake. Housebreaking the dog so far had been a bust. The carpet was starting to reek despite scrubbing it after every accident. They couldn’t keep the trashcan by the sink where it was convenient. Instead it had to be hidden in the pantry, away from persistent claws. And walking the mutt was a nightmare. As affectionate as Travis was around people, he became a terror around other dogs. Snarling and pulling at the leash with a strength that bordered on supernatural any time another dog wandered into view. Brian hadn’t realized how many fucking people owned dogs until he constantly found himself hiding out in crevices between buildings or repeatedly crossing the street to avoid another barkopolypse. Just let them sniff each other! He’s just shy! You need to let him socialize more! He was sick of the glib advice from people with dogs who knew how good they had it and appreciated a life of constant attention and free food. How the hell was he supposed to socialize the dog if Travis wanted to eat any furry face he saw? 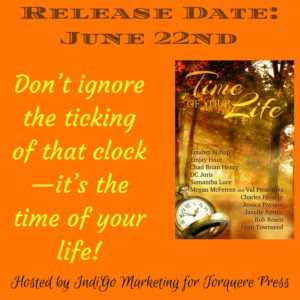 Rafflecopter Prize: One winner will be selected to win an eBook copy of the Time of Your Life Anthology a Rafflecopter giveaway

Posted by Diverse Reader at 9:09 AM