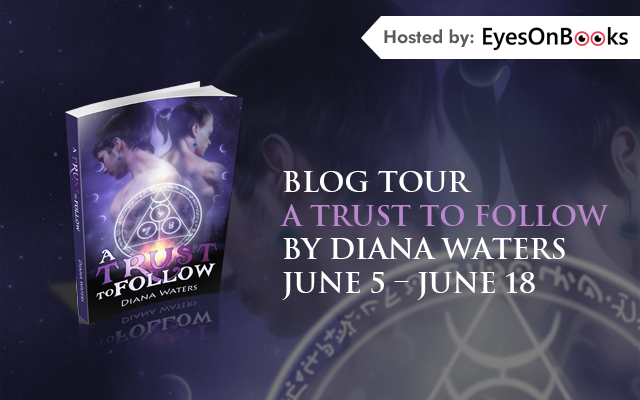 Prince Daymon is an Evoker—possessor of rare and feared magical powers.
When he is captured by bandits who plan to use his gifts for their own benefit he must depend upon his lover to come to his rescue.
Rhyder is captain of Daymon’s personal guard and the legendary ‘Lion of the West’, but can he reach the man he loves before it’s too late?

“What are you thinking about?” he asked Rhyder, who had not spoken in several long minutes. Rhyder simply looked at him, and Daymon flushed to think about what they had been doing only earlier that evening, when they were supposed to be resting until it was time to take their turn on watch. Rhyder had smothered Daymon’s cries with his mouth, and Daymon had writhed beneath him, back arching, and—
“Do you suppose Daylor knows?” asked Daymon, mostly to distract himself from the mental image.
Rhyder raised an eyebrow. “Everybody knows,” he said frankly and as Daymon gaped in shock and embarrassment, went on, “Most have likely known for some time. I thought you would have guessed that.”
“That doesn’t bother you?” Daymon asked, once he had recovered enough to speak again.
“No. Should it?”
“Yes! Because you’re… well, you’re Rhyder, and I’m—”
“—A prince,” Rhyder interrupted. “There’s no shame in sex, Daymon, and besides, it is your right to bed whomever you wish. Nobody could object, even if they had reason to.”
“That’s not the point! You could have your pick of anybody you wanted—for God’s sake, the servants probably have some kind of clandestine betting ring going on!”
“The point,” Rhyder said, unfazed, “is that you underestimate your own worth, and lend too much credence to court gossip. People will talk no matter what, but it rarely changes anything. Actions are what shape reality.”
Daymon was still mortified. “I can’t believe the subject of my… of us, is up for public conversation.”
“Perhaps not quite as public as you’re imagining, but yes, I’m sure it’s common knowledge, among the gentry and castle inhabitants at least.” Rhyder’s eyes sparkled mischievously. “Though if it makes you feel any better, they’re probably talking more about certain other things now than they are about our sex life.”


Inspiration in Dark Places: The Men Behind the Story

I’ve always loved a good fantasy. Growing up, I was constantly on the search for books that incorporated ideas centered around magic and sorcery, elves and the fae. And the darker or more unconventional the better – it was no good involving mythological creatures if there wasn’t also an element of danger to them, or having a main character who wasn’t put through the emotional wringer. It’s probably no surprise then that my first published story is one that fits within that genre; a fantasy that isn’t afraid to show a grimmer and less idealised kind of backdrop. What I especially wanted to do was create a universe in which someone with supernatural powers was not regarded as a hero or a prodigy but instead was feared and shunned, regardless of what sort of person they actually were. In this world, magic is unruly and unnatural, scary rather than wondrous.

At the same time, a story without at least a glimmer of hope is a story I wouldn’t want to read or to write myself. Happily-ever-afters might not be my thing but neither are tragedies, and so there had to be a counterpart to make the journey worthwhile – someone who really was a hero not simply because of their physical prowess or past deeds, but because they saw our main character as an individual worth championing. And so Daymon and Rhyder were born: one a prince whose own kingdom sees him as a monster, the other a figure out of legend who becomes so much more. At the heart of A Trust To Follow is the story of a person who has not yet learned to value himself in any other way beyond how society values him, and another who is determined to set him free.

DIANA WATERS is a New Zealander currently living in rural Japan. She has no idea where in the world she’ll be this time next year and is pretty okay with that. Other than reading and writing, her main passions include travel, Japanese pop culture, and competitive swimming.
DIANA WATERS can be found at:
Facebook: https://www.facebook.com/profile.php?id=100010664493155
Twitter: https://twitter.com/diana__waters
Posted by Diverse Reader at 8:12 AM