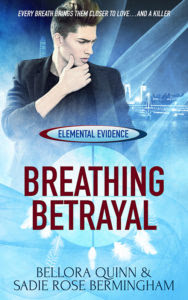 Jake Chivis is the descendant of Fire Elementals with a gift for psychometry, the ability to see memories from touching objects. After a bad breakup and trouble at work, Jake gave up his career as a detective in Detroit and moved to England to join a research program studying Elemental gifts at University College London. It seemed like the perfect way to escape his past and start over, and this time he’s vowed not to fall into the trap of dating a coworker. At least that’s the plan, until he meets Doctor Ilmarinen Gale. Mari Gale is blond, sexy, relentlessly academic and comfortable in his own skin in a way Jake envies. After a handful of embarrassing encounters, Jake is ready to resign himself to staying under the radar, but when a colleague’s brother goes missing, he and Mari must work together to find him. As they dig into the inexplicable disappearance, Jake is impressed with Mari’s competence and unique skills, and even more impressed by his ability to wrap Jake around his finger. Together the unlikely pair discover murder, betrayal, secrets and just how high Mari can fan Jake’s flames. 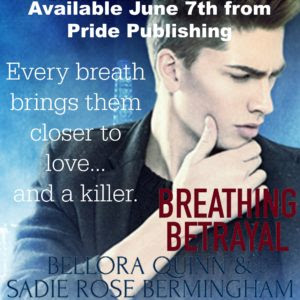 Sadie Rose Bermingham: A storyteller since before she started school, Sadie also enjoys reading, photography, live music and long walks on the beach. Sadie has worked as a bookseller, a pedigree editor for the racing industry and a local and family history researcher. Originally from the north of England, she has been working her way across the UK ever since. She currently resides on the south east coast with her long term partner, where she hopes to buy a mobile home and establish a whippet farm.

Rafflecopter Prize: One winner will be selected to win an eBook copy of Breathing Betrayal a Rafflecopter giveaway

Posted by Diverse Reader at 2:47 PM