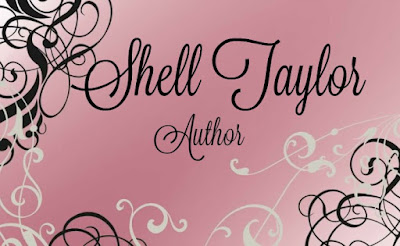 Shell Taylor may be new to the publishing world but in just one year she's released two magnificent books and leaves her readers always wanting more. She's for sure a writer to watch for and today I have her on my blog. We're going to look at these fabulous books, do a wonderful interview, and shut it down with a giveaway. So, let's get started. 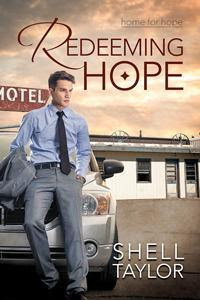 Fifteen years ago Elijah Langley’s world came to an abrupt halt with the death of his high school boyfriend. He keeps his past—and his sexual orientation—hidden until he attends a fundraiser for The Center for HOPE, an LGBT youth center, where he meets Adam Lancaster, HOPE’s infuriatingly stubborn and sexy founder.

A survivor of a turbulent childhood, Adam understands better than most the challenges his youth face. He’s drawn to Elijah’s baby blues and devilish smile but refuses to compromise his values and climb back into the closet for anyone—not even the man showering time and money on HOPE. Months of constant flirting wear down Adam’s resolve until he surrenders to his desires, but Elijah can’t shake his demons.

When a youth from the center is brutally assaulted, Elijah must find a way to confront the fears and memories that are starting to ruin his life, so he can stand strong for those he loves. 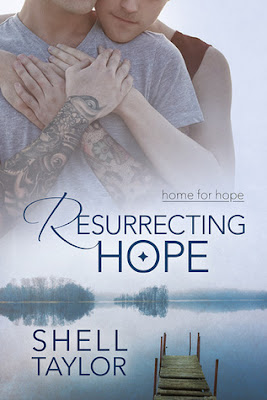 Adam Lancaster can’t imagine how his life could possibly get any better. He’s on the cusp of moving in with his boyfriend, Elijah Langley. Their charge, Kollin Haverty, finally has a loving, stable home environment, and Home for Hope is up and running, keeping over fifteen LGBT youth off the streets at night. But one phone call from his birth mother, Jessica Lancaster, is all it takes to unravel Adam’s carefully constructed new life.

Informing Adam his grandfather has died, Jessica expresses remorse for abandoning Adam to the state and begs him for a chance to be part of his life again. Jessica’s true colors eventually shine through her façade, and Adam is devastated all over again when he discovers she is only using him to get her hands on the valuable inheritance his grandfather left him. Jessica’s betrayal forces Adam so far inside his own hell, not even Elijah or Kollin can keep him from abandoning all of his responsibilities and running away. Adam will have to dig deep to find the strength to confront his birth parents, heal once and for all, and earn back his place with his new family.

Thank you so very much, Shell, for being here today! I have many wonderful authors on here and I am so lucky they actually want to. But you, well, I’ve known you for a while. You are one of my dearest friends and I remember the day you said, “I’m going to write a book.” It’s pretty cool being able to interview you because I know a lot of how things came to be but I can’t wait for everyone else to get to know you better and see why I adore you. So, let’s start.

Thanks for having me! You’re one of my most favorite people, and I’m tickled pink to be here!!

Currently, you have two books published from Dreamspinner Press. I am going to start with your first one in this series. Redeeming Hope. Tell us how it all began?

I actually saw a picture of two celebrities walking together. One had his arm around the other and they were both dressed in tuxes (I think they’d been at a wedding or something). They looked so carefree and happy and a scene popped into my head.  I decided to write a story around that scene in which being gay was accepted by everyone.


Well, if you’ve read the book, you know that’s not how it turned out. Somewhere between fleshing out Kollin’s character and selecting Adam’s job, Redeeming Hope came out. I know there are lots of books where the characters struggle with their sexuality, but for me, as a debut book, I think I needed to get their story out.

Am I right in saying there are three books to this and it’s a trilogy?

Yes! Resurrecting Hope just came out on December 25. Where Redeeming Hope tells about Elijah’s struggles and past, Resurrecting Hope tells about Adam’s. Ideally, I would’ve included his story into the first book, but I didn’t feel like I could do both arcs justice and cram it into one book. So voila… a trilogy is born. The third (unnamed as of yet) book was actually suggested to me when I was still writing the first book. One of my prereaders told me people would want to know more about Kollin. Lo and behold… she was right!

Your characters… let’s have a little fun here. Do they appear in your mind as characters you visually build or do you have visuals already for them? Who are they if you do?

Both… Kollin was very easy. It seems like as long as I could see Kollin in my mind, he looked exactly like Louis Tomlinson. I actually google pictures of Louis when I need to describe something Kollin is wearing. He’s perfect. Elijah is a likeness of Chris Hemsworth. Adam and Kirsten reference Thor a couple of times. I needed someone with a big physical presence for him and well… Chris works well! :D Adam is a guy I found online. Tumblr actually and right down to his arm sleeve. And yes, he was fully clothed. He wasn’t exactly what I’d had pictured in my head, but he was pretty close. Kirsten is close to Emma Watson when she had that short haircut.

As a new writer, tell what this whole experience has been like for you?

It’s been a mixture of exciting and terrifying. I had no idea what to expect, and still really wonder if I’m doing this whole shindig right. Success is variable in this world… some people are happy just to see their name in print while some want to be able to support their family on their book income and others thrive from the reader feedback. I guess I’m probably a mixture… I write because I want to and any money I make is a bonus. I’m blessed to have a husband who feels the same. Moreso than the number of books I sell, I find the most fulfillment comes from interacting with the readers. Which is strange because I’m not so much what you would call a people person! But it’s been fun and I hope to continue to write books that people want to read!

How did you celebrate your first release?

It was pretty low-key as far as actually celebrating. Some friends called me to check in through the day. My family and I had dinner out together and my husband got me a little something to say he’s proud of me. It was perfect. Made me feel special without being overwhelming as it was such an anxiety inducing time for me!

You’re a mom, how do you find writing time and can you give all of us some helpful ideas on how to schedule time for it?

I do most of my writing while my kids are at school. My two youngest are still in preschool so that only gives me a couple of hours each morning. I try to write at night after everyone is asleep, but that doesn’t always work if I’m too tired. I listen to a playlist when I write. It’s short – less than ten songs. It helps get me in the mindset of the story I’m writing, so when I can’t find the quiet time, I’m able to tune out the chaos of the kids and settle into the story when I have the playlist on.

What are you currently reading right now?

I decided to mix classics in with my usual stuff this year, so every other book is a classic. I started with Treasure Island because it was the shortest one I already had on my Kindle app! It’s not my favorite book so far, but I am enjoying reading it. Next on my list is Solitary Man by Shira Anthony and Aisling Mancy! I’m huge fans of both of them so I can’t wait.

Who are some of your role models in this genre?

There are a lot of amazing M/M authors. Abi Roux was my first so she’ll always be on my list. Amy Lane never ceases to amaze me with her writing, whether it’s a fluffy piece that makes me feel good for days or an angsty one that has me crying in my coffee. Edmond Manning is an amazing author, and I could get lost in his words for hours. There are so many more who I love to read but those are the ones who popped into my head first!

Can you tell us what you’re currently working on and what future projects you have in the works?

I’m currently working on the third book in the Home for Hope series. It’s not named yet because I’m terrible at naming books, but as most people know, it’s Kollin’s book. And as many people have figured out from the foreshadowing, Riley’s the other MC. It’s been a bear to write. Between some personal stuff going on and switching away from writing Adam/Eli, it took a while to get it to a place I’m happy with, but I’m getting there. I’ve set a new deadline with DSP and hopefully it’ll be out sometime in September or so.

I’m on Facebook a lot. I do most of my promo and general random posting about life there. I reblog a variety of stuff to Tumblr and Twitter… mostly Once Upon a Time flailings, or Star Wars, or Marvel, or hot men, or cooking. And my blog is often neglected, but when I have official stuff or deep insightful thoughts (I can’t even type that without laughing) I go there!

Thank you, Shell. It’s been so awesome having you here! I’m so excited for you and can’t wait to see all you have to show us!

If you are international you can choose one of her titles as an ebook.
Contest ends January 29th!

I want to thank Shell for being my spotlight this week and encourage you all to check out her work!
Thanks and good luck!!

a Rafflecopter giveaway
Posted by Diverse Reader at 5:51 AM